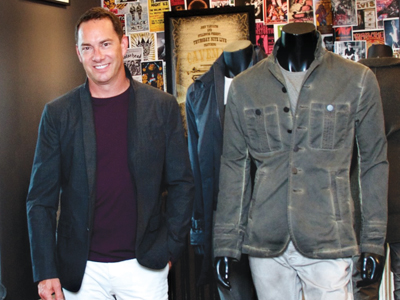 As Russ Fearon, owner of Throat Threads Apparel in Burlington says, “You do it by taking care of people. It goes back to all the things we learned as kids: be nice to each other and share. If you take care of the people around you; friends, colleagues, employees, trades people, the guy who fixes the phone lines  ““ everyone, like you would your family, then people take care of you in return.”

Fearon just observed the 20-year milestone of his business, Throat Threads Apparel in May. What began 20 years ago as an entrepreneur representing a handful of neckwear companies has grown into a thriving enterprise with more than 50 employees and offices in Montreal and Vancouver, representing some of the largest and most prestigious apparel brands worldwide.

Fearon's office is housed in a century home just off Plains Road in Burlington. Over the years, additions have been made to create office space for his more than 50 employees, but the original home is maintained as part of the site. Affectionately referred >> to as “the mansion,” the red brick stunner is home to Fearon's office and the showrooms that are staged for buyers and media to view his ever-expanding range of collections.

Fearon has made a concerted effort to maintain all the original details of the home that he can. Original staircase, fireplaces, hardwood flooring, baseboards and mouldings are intact, and the exterior brick has been completely cleaned and restored. Just inside the entrance is a framed document referring to the origins of the property.

It's this attention to detail that is evident in every nook and with every employee. The entire team simply seems to enjoy being there.

There is green space and a patio, and the week we arrive to visit Fearon, there are preparations being made for a staff barbecue.

Fearon is contagiously enthusiastic, about all things. Having occasion to meet with him several times over the years, he exudes boyish excitement about his work, his family and whatever new venture lies before him.

The attitude seems contagious as we peruse the showrooms and he calls for an employee to assist, now and then. He treats everyone with the same relaxed attitude, and they seem to treat him the same in return, each task completed with a smile, and most often a laugh.

“My door is always open. I believe you get back from your employees what you give. That's why we are a profit sharing company. It was a bit harder early on, but “˜if you build it they will come'. Now, it is easy to find great people. There are lots of great people who live here that would rather not make the drive into Toronto,” says Fearon.

The latest additions to Fearon's stable ““ Brax and Adidas ““ were both landed within a few weeks of each other earlier this year. Both Brax (a German company that sells more than 8.5 million pieces of clothing a year) and Adidas will distribute their fall 2013 lines with Throat Threads Apparel. By the time this article is published Fearon will also hold the keys to Porsche Design by Adidas.

These brands add to the already impressive list that includes names like Robert Graham, Michael Kors, Tahari and John Varvatos.

When asked what accomplishment he is most proud of Fearon says, “I'm most proud of taking care of everyone. Creating a great environment so that everyone is happy. If you take care, you will get great things in return.”

In 1993 when the story began, it was just Fearon and his neckties. By 1995 he had scored the deal to distribute Superba, the world's largest manufacturer of neckwear.

One of those neckwear lines was Tommy Hilfiger. A year later they expanded their deal with Fearon to include dress shirts, underwear, belts and leather goods. That same year, he became the Canadian partner of Oxford Industries, an international company of branded and private label apparel.

Skip ahead to 2003, the ten-year marker, and Throat Threads represented Timberland and Nat Nast Luxury Originals. Profit Magazine listed the Burlington business as one of the top 200 fastest growing companies in Canada.

“It takes ten years to make an overnight success,” Fearon says. “When the company began it was just me.”

And what comes next? As Fearon readies to depart for Italy and the Varvatos fall runway show later that evening, he is already envisioning what an office in New York will look like. No doubt, we'll do the follow-up interview in the Big Apple.