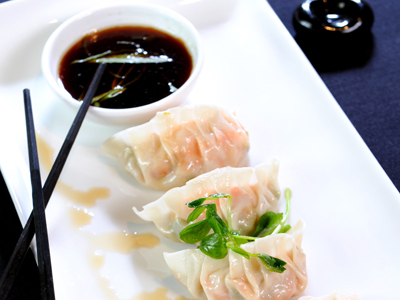 “I have a real passion for wild west coast seafood (salmon, Dungeness crab, Black Cod) and a desire to bring it to Oakville,” says Jeff Burghardt, owner of the newly revamped OC's at Stoneboats along Bronte Harbour's shoreline.

“I looked at a lot of real estate,” he says. “I knew I wanted to be in Southern Ontario and Oakville has an educated affluent community with the ability to appreciate this product.”

That answer is notably more complex. It involves the meeting of an Ohio-trained sushi chef with a degree in music, with a North American grain industry executive, and a seafood chef who owned a restaurant in Panama Beach, Florida. The story starts in Prince Rupert, British Columbia.

Originally from Ancaster, Ontario, Burghardt moved to Western Canada to work in the business side of agriculture, first as a beef salesman and eventually as the CEO of North America's largest grain exporting business. After two decades in the industry, he retired in 2009 but in the meantime had developed a new obsession (next to golf) thanks to British Columbia's nature-loving vibe: sport fishing, specifically for salmon in the Pacific Ocean. “There's nothing liking catching, fighting and landing a 50- or 60-pound salmon,” Burghardt says. “The first time I ate wild Pacific Salmon, I had no idea fish could taste that good.”

Between fishing trips he of course had to work and often his job involved entertaining international clients, primarily from the Middle East and Asia. Options in the small town of Prince Rupert, population 15,000, were slim but located in what Burghardt calls, “the middle of nowhere,” was a great seafood restaurant serving what he says was the best sushi he ever ate, thanks to Chef Dai Fukasaku.

Fukasaku was born in Japan but moved to the U.S. to study music, specifically Italian opera. While putting himself through school, he worked in a restaurant and because he was the only Japanese employee, the owner offered to send him to sushi chef school in, of all places, Ohio. “I see a lot of connection between creating music and creating sushi,” he says. “Even today, every time I slice a beautiful piece of fresh Sockeye salmon from Prince Rupert, I smile.”

Eventually, he ended up plying the art in B.C., Canada's sushi capital. And that's where, five years ago on the golf links, Burghardt put the idea in Fukasaku's mind of moving to Ontario to start a new business venture. Line caught, wild Prince Rupert fish plays a pivotal role in this idea.

“All the fish we serve at OC's is wild, line and hook caught, no nets,” Burghardt says. “Each fish is brought on the boat, processed, and flash-frozen immediately preserving the freshness so it can be shipped to Ontario and eaten days later.”

Burghardt says he works closely with suppliers there ““ not distributors, but directly with the fishing boats. Nothing caught is from the endangered list and everything is fished using sustainable practices. The fish, he says, is healthier, higher in Omega 3, lean and rich with a fine texture. “It really is a superior eating experience.”

Fukasaku emphasizes the fact the salmon have gone through a natural four-year life cycle where the fish travel from B.C. to Japan and back again, building muscle and eating natural foods.

So once they had the concept, the sushi chef, and the fish, one more ingredient needed to be added. Enter Will Stewart, coincidently born in Ohio, who moved to Florida and opened his own beach-side restaurant taking advantage of the gulf-coast seafood bounty. He's married to a Canadian (giving him a bit of Canuck cred) whose family lives not far from Oakville. OC's was the ideal opportunity for him to put passion into practice in a relaxed fine dining atmosphere.

“We allow the fish to do the talking,” he says. “We take a simple piece of fresh Pacific tuna or salmon and allow it to be the taste experience.” The fish is grilled, sautéed, poached or baked to order (medium rare is recommended) and light sauces enhance the taste. The white fish is almost butter-like and the salmon has a natural pink texture and appearance. For those adverse to “˜fishy' tastes, the sweet Dungeness crab cakes will change your view and you'll be sorry you ever ate any other shell fish.

As for other menu items ““ meat, vegetables, wine and even sake ““ local is the goal. Peller Estates dominates the wine list, but a notable option is Ontario Spring Water Sake produced in Toronto's distillery district. After all, it's also Burghardt's goal to “open people's minds and taste buds to enjoying cold sake with dinner.”

Old might meet new, and west might meet east here along the shores of Lake Ontario, but change happens in moderation, especially in conservative towns. And that's perhaps one reason this new dining concept is best housed in a historic “˜stonehookery' building circa 1840, and the iconic name Stoneboats has been subtlety updated with a new font and quiet “OC's” added. The inside, however, was totally redesigned and reopened in May 2011 just in time to enjoy the patio facing the updated Bronte Harbour waterfront ““ so naysayers be warned: technically you can see water while you eat the fish.
RECIPE: Prosciutto Crusted Ling CodRECIPE: Gyoza