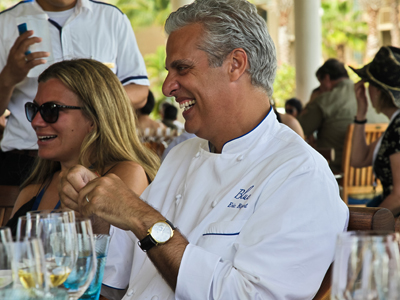 It's mid afternoon of another perfect day in Grand Cayman. I shift in my beach chair and nudge my sunglasses back into place. It's then I notice Eric Ripert strolling along the water's edge ““ not 10 metres from my spot in the sand ““ casually walking the beach, taking an occasional puff from his cigar.

What is uber-chef Eric Ripert ““ best known for New York's Le Bernardin ““ doing on this Caribbean beach? This is where Chef Ripert mans the helm of Blue, the fine dining marquis at The Ritz-Carlton Grand Cayman. And on this particular day in January, Ripert, along with some of his closet chef pals and culinary celebrities, are hosting the ultimate posh foodie getaway: Cayman Cookout.

I've visited Grand Cayman in the past, and found it lived up to its reputation as a gourmet mecca stocked to the gills with fine dining restaurants and some of the best wine cellars in the Caribbean. So when the invitation arrived to check out the Ritz-Carlton and Ripert's interpretation of a food and wine event, I started packing.

Cayman Cookout is a four-day food extrava- ganza. And that's putting it mildly. The week-end is a food and wine lover's paradise, where the only thing in more abundance than the Champagne is the celebrity chef sightings.

The event is in its fifth year (2013) and is a joint partnership of the Cayman Islands Department of Tourism, The Ritz-Carlton and Food and Wine Magazine. Chef Ripert hosts and invites a few of his closet friends, who happen to be Anthony Bourdain and Jose Andres, along with a changing cast of all-stars from the culinary universe. For the 2012 event invitees included Richard Blaise, April Bloomfield, Laurent Gras, Cindy Hudson, Ray Isle, Ron Jacobson, Francois Payard, Andrea Robinson, Michael Swartz, Aldo Sohm and Chris Hanmer. A Canadian chef also made the roster with Ripert tapping Chef Paul Rogalski of Calgary's Rouge Restaurant.

So with the day's itinerary reading like a Food Network programme guide, I set out for the first of a slew of seminars and tastings on the schedule.

Seminars, demos and tastings are hosted in a variety of locations across The Ritz-Carlton's mas- sive grounds, but many occur in a pair of beach pavilions on the hotel's stretch of Seven Mile Beach. Two huge white canopies dot each end of the beach, each fitted with all the gadgets and tools the chefs will need, plus sound and video feeds so each guest can hear every word, and see each stroke of the knife. Guests walk to the beach pavilions with bare feet, and so do the chefs.

I settle into a seat for the first demo of Cookout Day One: Canada Meets Cayman with Paul Rogalski. What becomes apparent from this first demo is that the chef seems to honestly be having a good time. I learn later that each chef has travelled with family members and is staying at The Ritz for a few extra days. So, relaxed and tanned, with the stunning blue sea making a backdrop behind him, Chef Rogalski charms the crowd, talks about Canada and Rouge, all the while whipping up delicious dishes for the crowd to sample.

The impeccable service and choreographed timing that is a hallmark of everything with the name Ritz-Carlton made its way onto the beach to support the chef. Refreshments are offered as quickly as each guest chooses a seat, and as Rogalski completes a dish onstage, a team of servers delivers an individual plate of the creation to each guest.

With the demo drawing to a close, attendees are sent away with a thoughtful token of the islands. Some Cayman Sea Salt on this morning, on other occasions some spices or a fragrant parcel of wood chips for grilling.

My next stop during Cookout Day One is lunch. This time off the grounds of The Ritz, a handful of events are hosted at nearby restaurants. The Imperial Lunch is being hosted by The Brasserie and Moet & Chandon and transportation has been seamlessly arranged by the hotel. It seems like the staff knows where I am going before I do. So a quick drive to this local seafood restaurant, and I have my first glass of Moet in hand as we explore the restaurant's garden. Believing in local and sustainable products, La Brasserie's garden is growing everything from radicchio to rhubarb. Another twist to their menu is that they have their own fishing boats and catch fresh fish each day for service.

The first formal meal of Cookout is nothing but spectacular, with each course paired with a different vintage from Moet & Chandon. Starting with Cayman Spiny Lobster Cannelloni, then moving to Cayman Sea Salt Crusted Snapper and finishing with Local Apple Banana Mousse with a delicious pineapple beignet, the meal is marvelously Caymanian. Along with the Champagne pairings, the only word to describe the meal is indulgent.

I am known to be a bit of a baker, finding simple satisfaction in turning out perfect pastry crust and delicately lofty cakes. So, I rush back to The Ritz to make it to Chocolate Epiphany with Francois Payard. The French master did not disappoint, turning out a demo on the beach in searing Caribbean heat with the requisite butter, eggs and chocolate. With my toes digging into the warm sand, I enjoy every scrumptious bite of the chocolate cookies that are served. A Payard creation containing no flour or butter, made lofty by egg whites beaten into sweet submission.

There's just time for a quick swim and a little refreshment at Bar Jack, the hotel's poolside bar, before getting ready for what is rumoured to be the best event of the weekend: Barefoot BBQ.

I have been told it will be the best party of Cookout, and simply, it was. Hosted by Tiki Beach and packed with revelers come to enjoy the food, the wine, the chefs and the destination; Barefoot BBQ did not disappoint. Guests strolled barefoot in the sand from station to station, sampling food, wine and cocktails. Needless to say the biggest crowds were for grilling stations manned by the three big guys themselves: Ripert, Bourdain and Andres. The convivial spirit ““ and chefs ““ kept the crowd happy and enjoying the scene well into the night.

Oddly, due to the previous night's engagement, the first stop of Cookout Day Two is a 10 a.m. talk entitled Good vs. Evil: Anthony Bourdain and Eric Ripert. The two friends, after a late night, begin the day entertaining fans with shoptalk and sarcasm, as only Bourdain can. This seems to be the weekend's hot ticket, seats packed and some standing to eavesdrop on the hour-long conversation. They put each other in the hot seat, take questions from the audience, slam Paula Dean and end it all with a rousing round of applause.

Lunch on Cookout Day Two is courtesy of Chef Laurent Gras. Served at Periwinkle, on the inland side of the resort (overlooking the man made bay and boat launch) Gras promises a few lucky guests a taste of his seafood mastery. Gras, a Michelin- starred chef has sold out guest engagements in New York in just 60 seconds.

I'd like to say the dishes were the highlight of this meal, but Gras' star faded beside Ripert's. A stunning starter of Conch with Fresh Coconut and Caviar became secondary when Ripert decided to join the media table for lunch. Suddenly a dozen journalists from across Canada and the U.S. were spellbound by the warm smile ““ and I think the French accent didn't hurt ““ of Chef Ripert. Sorry Chef Gras.

Cookout Day Two is topped off by a huge dinner party hosted concurrently by three restaurants at Camana Bay, a lovely outdoor shopping and entertainment centre a few minutes from The Ritz. The entire community of Camana Bay is taken over by the event, with outdoor cocktail and hors d'oeuvre service along with book signings by Bourdain and Michael Schwartz prior to dinner.

Chef Rogalski and his crew have moved into the kitchen at Abacus for the night's service. They have brought along a number of uniquely Canadian and personally meaningful ingredients with them, as Rogalski explains to diners with each course. The highlight of the meal is the main of Wapiti Tenderloin with Oxtail Perogie and Sweet Corn Panna Cotta (that's elk for the uninitiated). Or it was the highlight until Rogalski sent guests off with a snow cone of Knob Creek Bourbon and Canadian Maple Syrup.

A massive chocolate buffet ends the evening, with guests sipping Champagne and sampling the tiny, perfect creations in the warm night air. My Cayman Cookout comes to a close, but the memories are delicious enough to savour for a lifetime.
Gourmet Takeaways
Cayman Sea Salt
This salt is made from two of the islands most abundant resources: sea and sun. Made by a family-owned and operated business, the salt is derived from purified and solar evaporated sea- water. The newest offering of the company is a smoky-sweet BBQ rub. caymanseasalt.com

Cayman Smoke
Created from the dead branches of the sea grape tree, this fruity wood chip adds smoky taste and aroma to your BBQ. The product of resident of Little Cayman and barbecue champion Elizabeth McCoy.
Sticky Toffee Cake
Rich, decadent cake studded with chocolate and dates. Packaged in a gift box with extra toffee sauce. This was eaten so quickly we didn't get any photos! It's that good. stickytoffeecake.com

Tortuga Rum
Tortuga Rum Cakes have been produced and sold to visitors for close to 25 years. Visit one of the retail outlets for private label rum, the infamous cakes, and other gourmet products including coffee, jellies and chocolates. tortugarumcakes.com

Seven Fathoms Rum
A premium rum crafted in small batches in Grand Cayman. The twist is the rum is aged in oak bar- rels underwater. The makers believe the constant push and pull of the tides “massage” the rum into a better tasting spirit. TIP: Toast the island farewell with a “Fathom Rum Punch” at Owen Roberts International departures lounge. sevenfathomsrum.com

Must Try
Osetra Bay
This elegant, fashionable restaurant is a little out of the way, but well worth the cab fare. Cool SoBe style decor compliments a stellar menu created by Canadian Chef Joseph Watters.

Luca
World-class Italian fare inside the beachside luxury condo hotel the Caribbean Club. Impeccable menu and wine list and service to match.
Blue by Eric Ripert
The Ritz-Carlton Grand Cayman's fine dining restaurant Blue by Eric Ripert should not be missed when visiting the island. Ripert sets the tone for Cayman Cookout and this is where his work is at its finest.