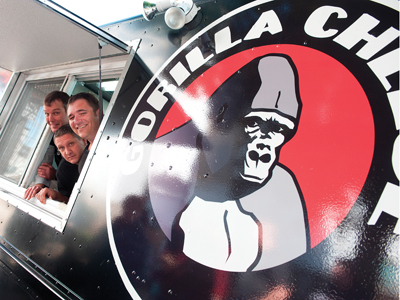 If you want to know about the state of street food in Ontario there is just one person to ask. Suresh Doss, a food and wine writer and publisher of Spotlight Toronto, has become the doyen of gourmet to-go for those looking to buy, and sell. Skillfully spreading the word via social media and navigating city permits, he has become a beacon in the culinary darkness, and red tape. Here he tells it like it is, and how it should be where street food is concerned.  – HC

About 15 minutes into the first Food Truck Eats event, I realized that we were in for a roller coaster ride.

July 2, 2011, a few minutes before 11 a.m. in the sun-soaked Distillery District space, I directed the last truck into its spot. It was a cupcake vendor, Cupcake Diner, and since all of Natalie Ravoi's goods are prepared in advance in a commercial kitchen, she just pulls up, opens the order door, and is ready to go. Ironically, an hour later, all her cupcakes were gone. All 1,000 of them.

For the first Food Truck Eats event, we expected about 800 people to show up. Instead, the numbers were close to 3,800. It was chaotic. The food truck phenomenon had arrived to Toronto.

“Post-recession inspired eating” has swept through America in the last six years as chefs of all culinary interests have taken to the road, opening mobile eateries to offer elevated, affordable street food without compromising on flavours and ingredients. Food trucks have been around since the '50s in the U.S., but this was different. It was globally-inspired, cheap, inventive, and it piggy-backed on another social phenomenon: social media. Twitter and Facebook drove foodies mad as they scrambled to track down these trucks. It spread like most culinary trends; fast and ferocious. Los Angeles, Portland, Miami, Austin, New York, Cleveland, Philadelphia, Boston, Baltimore. The unique landscape of each state also played a pivotal role with the trucks as some cities have room for curb side trucks, some don't. The “food truck rally” concept took things to the next level as groups of trucks banded together and took over parking lots and other spaces. These rallies not only allowed the masses to plan their attack ahead of time, but they also gave foodies the opportunity to understand food truck culture city to city.

Food Truck Eats
After being inspired by Miami, I hosted Food Truck Eats (FTE) last July at the Distillery District in Toronto. A month prior, The Toronto Star unveiled my plans for a three-part festival, something the country had never seen before. I had a specific idea in mind when planning the event: food trucks and restaurants (and popups) sharing the same space and celebrating the diversity of Ontario with good street food. In one case a city employee said that the idea was “completely ridiculous, no one wants anything other than hotdogs for street food in Toronto”.

Thankfully, the response was anything but. In a city so restricted by what's available on the street to eat, we drew a large crowd. The #foodtruckeats hashtag trended nationally within 10 minutes, and continues to be used on a daily basis. Subsequent FTE events have attracted anywhere from 2,000 to 20,000 attendees and we've taken the trucks to cities like Mississauga and Stratford to demonstrate that trucks can co-exist with restaurants and the changing landscape.
City Red Tape
The criticism from the city represents the general tone on street food. While neighbouring cities like Hamilton, Burlington, Mississauga, and Kitchener are planning to implement some sort of street food program, the city of Toronto is still recovering from the bitter aftertaste of the “A la Cart” fiasco. The program was put in place to increase the variety of street food on Toronto streets, and to foster entrepreneurial spirit. Instead, it was overregulated and riddled with red tape. Sadly it was a poorly executed initiative that resulted in large amounts of debt and bankruptcy for the vendors. As a result of this embarrassment, the city is still very sensitive about anything street food related, and no new vendors (trucks or carts) are allowed to set up on public property or curb side.

So instead, we rally on, and the trucks are drawing large crowds that other cities in Canada can only dream of. There are currently more than 15 active food trucks in Toronto with another dozen expected to pop up in the GTA. “We're not going to wait for the City of Toronto to change its rules. There's enough action to go around,” seems to be the general response I get when I encounter a new food truck owner. Between weddings, private events, corporate functions, and food truck rallies like Food Truck Eats and SEW Hungry in Hamilton, everyone wants to be in the presence of a food truck.

More Diversity
Food Truck Eats has also functioned as a platform to see how far we can take street food. With a province as multicultural as ours, it's important ““ and fun ““ to think about how great our street food scene can be. Personally, I'd love to see a food truck that specializes in Filipino food, South Indian or vegetarian fare. We're starting to see this, as the new breed of trucks this year will offer oysters, ceviche, lobster rolls, Jamaican street food, and raw foods.

What's missing? For city hall to pay attention to the consumer, step back, and give the entrepreneurs the opportunities to push food forward.