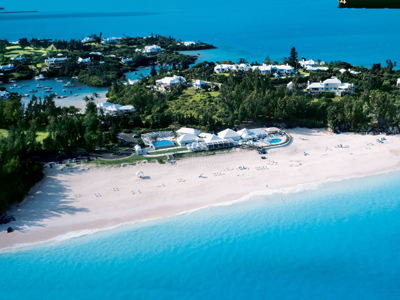 I don't golf, but being in Bermuda makes me wish I did. It has something to do with seeing how really gorgeous the golf courses are here with their lush foliage and rolling green fairways set against dazzling blue water.

I thought about this while looking at the incredible setting at Tucker's Point Golf Course and again while arriving at the Fairmont Southampton resort. The hotel is positioned up on a hillside overlooking the ocean with the golf course spread out around it.

I do not know how golfers navigate the hilly terrain, the sand and water hazards and the trees to get that little ball in the cup. But, thankfully, that is not my problem. My goal is to get to my spa appointment on time.

The Fairmont Southampton's Willow Stream Spa is all about pampering. Fairmont's Willow Stream Spa concept (available at a number of its hotel locations) is topnotch and consistent, so you know you're in for a treat when you get there. The spa at the Southampton offers a number of island-inspired treatments such as the Bermuda Aromatherapy Facial that uses sea algae and chamomile. It's an hour of bliss.

There's a water shuttle that goes between the Southampton and its sister property in town, Fairmont Hamilton Princess. It makes it really handy to go shopping or visit one of the art galleries and attractions that Hamilton has to offer. Many of the museums and activities cost very little or are free, offering tremendous value.

With its cotton candy coloured buildings, Hamilton oozes confectionary charm. When  buildings are pink, blue, yellow and green, you can't help but smile and relax. And it ensures that the frothy pink Fairmont Hamilton Princess is right at home. Enjoy a drink out on the waterfront terrace, or for a real treat, indulge in high tea ““ it really shouldn't be missed. The options are endless, because in addition to scones and clotted cream, specialties include the Rum Tea with smoked salmon sandwiches and rum-spiked cream cheese.

Away from the pink-sand beaches and the golf courses, there are lots of options. The Bermuda National Gallery on Church Street in Hamilton is the home of Bermuda's national art collection and tells Bermuda's history through its fine and decorative arts, reflecting the island's rich multicultural heritage. Every Thursday, there's a free, guided tour, and admission is free Monday to Friday.

Tour options include the African Diaspora Heritage Trail Tour to discover the universal links that connect the island with the profound history of the Diaspora worldwide. And to learn more about the history and culture of Hamilton, join the city's Town Crier for a walking tour of downtown. You can't miss him, dressed in his official uniform.

Also popular is Gombey Saturdays in the Park. Enjoy live entertainment including Calypso tunes on the steel pan in Par-la-Ville Park in Hamilton, and or take pictures of the incredible Gombey dancers with their colourful costumes and high-wattage moves.

If all that touring and activity makes you tired, one of the best beaches on the island has to be at the Rosewood Tucker's Point resort, situated along Castle Harbour and Harrington Sound. Blue and white striped lounge chairs dot the delicate pale pink sand and invite relaxation. The turquoise ocean beckons for a refreshing dip. Even from the rest of the island, it's a world away. No amount of time spent here would be enough. The rooms are elegant yet relaxed, and amenities include excellent dining under the careful attention of Chef Serge Bottelli, a topnotch spa, beach club facilities, numerous pools (some with private cabanas), plus a dive and watersports centre.

And then there's the golf course. The widely enjoyed par-70 golf course was originally designed in 1932 by Charles H. Banks. The scenic championship course was completely redesigned in 2002 by Roger Rulewich, the former chief designer for Robert Trent Jones, and has earned numerous accolades. It looks challenging, but really all I can think about is how beautiful it looks.

Bermuda has many exceptional hotels and that includes The Reefs Hotel and Club. In addition to oceanfront hotel rooms, it has Club Residence condominiums. The boutique-style residences offer two- and three-bedroom options, making them perfect for families or friends sharing. Enjoy the amenities of a sleek, well-equipped home, plus all the services of the hotel, including waterfront dining, infinity pools, snorkeling right off the beach, a spa and a beautiful stretch  of beach. Beachside weddings are popular here and it's no wonder ““ there's a definite feeling of romance in the air.

There is plenty of history and culture to explore in Bermuda. The “historic town of St. George and related fortifications” are a UNESCO World Heritage Site. It's where Bermuda began after an English ship, the Sea Venture, shipwrecked on the reefs off the East End in 1609.

The town's history is visible in its picturesque cottages, quaint streets and wealth of military, civic and religious architecture. Impressive fortifications in the East End include Fort St. Catherine, built in 1614 and last upgraded in 1878, along with Alexandra Battery and Gates Fort. Guns, cannons and muskets on display help tell their military stories.

King's Square in St. George is centre of the action in town. Tuesday evenings are Market Nights and the square comes alive with entertainment, line dancing displays and Gombey performances, plus local arts and crafts and an assortment of locally made products. Tours and historical re-enactments in St. George bring the past to life. Watch 18th-century justice play out in King's Square as a tribunal determines the punishment of an “offender”.

While exploring the quaint streets in St. George, join the Made In Bermuda Tour to discover locally made arts, crafts and products, including Bermuda Rum Cakes and fragrances at the Bermuda Perfumery.

Museums help tell the island's story, including the Bermuda National Trust Museum at the Globe Hotel that was built by Governor Samuel Day and dates from around 1700. It is one of the oldest stone buildings in Bermuda. Fascinating exhibits showcase Bermuda's role in the American Civil War. And at Tucker House Museum, take a look into the past by visiting an 18th-century merchant's house with its elegant interior dating back to the late 1700's.

At the other end of the island is the Royal Naval Dockyard, built to help defend Britain's interests in North America after the losses of the American Revolution. After serving the ships of the Royal Navy for 150 years, its docks now welcome cruise ships and its buildings house a shopping mall, craft market, arts centre and restaurants. The Bermuda Maritime Museum occupies the Dockyard Keep.

Popular stops include the Bermuda Clayworks, where you can watch potters create their beautiful designs, and the Dockyard Glassworks and Bermuda Rum Cakes. Walk into the building and you are immediately confronted by both the heat of the glass furnaces and the delicious scent of rum cakes.

Also at the Royal Naval Dockyard is Snorkel Park Beach that offers watersports, jet ski tours, beach volleyball and full amenities. Barbecues, beach parties, late night snacks and a nightclub are all available on the menu.
With so much to see and do, it really didn't matter that I don't play golf.

If You Go
Westjet (westjet.com) and Air Canada (aircanada.com) offer flights from Toronto to Hamilton, Bermuda in about 2 ½ hours.