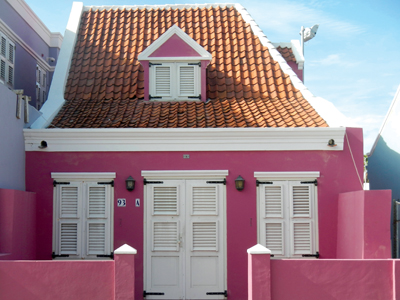 Circling above the Caribbean island of Curaí§ao, I wonder what it is that draws people here. Beneath me, there are limestone cliffs and small inlets; a few pockets of sandy beach, but mainly a bean-shaped curve of land that stretches flat and absurdly dry. I can see rocky outcrops studded with cactus ““ the towering columns of the kadushi with its thousands of needles, prickly pear cactus, Turk's cap cactus and thorny green acacia bushes. The plane banks, makes one more pass around and we drop down to the long landing strip.

It turns out that Curaí§ao is an island of flavours. It's stunning, actually: A piece of scrabbly land that grows almost no crops and imports the vast majority of its foodstuffs. Yet, scratch just below Curaí§ao's surface and there's a vibrant melting pot of colours and flavours ““ from the magic that happens in its Creole kitchens, to the pastel buildings in its capital city, to the brew of ancestry and languages that have steeped a culture like no other in the Caribbean.

Like many islands in the New World, Curaí§ao was embroiled in a tug of war between battling colonial powers. It was the Spanish ““ searching for gold ““ who planted their flag soon after the voyages of Christopher Columbus. They found no riches and quickly abandoned the island. Soon after, the Dutch West India Company laid claim, established plantations of peanuts and maize and harvested salt from enormous saline ponds. Curaí§ao's deepwater port fit the bill for the trading company ““ providing a natural shelter to establish a centre of commerce.

It was the safety and strategic position of the natural port that also attracted both the British and the French, setting off years of struggle between the two superpowers as they battled for profitable trade routes. One power tossed out the next until the end of the American Revolutionary War, when Curaí§ao was finally handed back to the Dutch as part of the peacemaking settlement.

This back and forth bore fruit in a real fusion of flavours ““ the Spanish, French, South American, African slaves and Dutch have all passed through Curaí§ao and left their influence. It's heard on the streets ““ you'll hear Papiamentu, a patois blend of Portuguese, Spanish, Dutch and African dialects ““ and in the traditional tambu drumming and dance, and in the stews that bubble on the stovetops in every local kitchen.

I think of this fusion of flavours as I tie on my apron at Angelica's Kitchen, a local cooking school committed to the idea “that everybody cooks.” The school's kitchen is new and shiny clean; we're divided into teams of two to prepare an appetizer of fresh salsa and tortilla chips, a spicy pumpkin and ginger soup that turns out to steal the show, and a yummy dish of chicken stewed in tomatoes that tastes like it must be a recipe taken from the cookbook of every Curaí§aon grandmother. Several hours after we begin chopping, stirring and stewing, we sit down for a communal dinner. The friendships formed may be fleeting but they've been fun, lubricated by glasses of wine and laughter while navigating these new recipes.

Next day, at the Santa Barbara Beach & Golf Resort ““ the island's largest property ““ the bartender pours me his signature drink, the Bob Marley, a tall, frosted glass of tri-colour striped layers: peach, strawberry and green melon, with splashes of melon liqueur and white rum to add some kick. It mates perfectly with the plate of skewered grilled shrimp, mixed greens and grilled slices of sweet pineapple, drizzled with a honey-lime vinaigrette dressing.

Like the rest of the island, the Santa Barbara has turned all my preconceived notions upside down. No mega-resort, cookie-cutter style meals here. The resort holds firm to the concept of “personal preference.” Every guest has a different philosophy and a different wish list, so they aim to cater to those preferences. At events numbering hundreds of people, guests are still able to order a la carte from the restaurant's regular menu selections.

The kitchen and chef are sticklers for following a sustainable seafood mantra and buying catch from the local fishermen on a daily basis. The locals bring in spiny lobster, shrimp, mahi mahi and lionfish. Chef chooses and plans a menu around the daily catch, keeping in mind the health of the fish population, catching methods and other sustainability practices.

With not much growing in the arid landscape, the resorts and restaurants source many of the harder-to-find ingredients from Miami and the Netherlands. It's one of the more refined angles to the island ““ store shelves are stocked with foods and flavours that reveal the European Dutch connection. There are mustards with bite from the Benelux region, tins of herring from Holland, and rounds of Gouda cheese that are a favourite with visitors from North America.

The capital city of Willemstad boasts a source of fresh foods with a decidedly more regional slant. The city's famous Floating Market bobs along the waterfront at the north end of the main street of Handelskade. Vendors from Venezuela and neighbouring Caribbean islands tie their produce-laden schooners alongside the wharf, throw open a side door, unroll colourful sun shades and peddle mounds of tropical fruits and vegetables right off the boat.

The core of Willemstad's historic port town has been named to the UNESCO World Heritage List, to recognize the growth of the well-preserved multi-cultural community over three centuries. The oldest part of the city, called Punda, is a warren of narrow streets, a tiny canal and an inlet, lined with Dutch colonial architecture in a rainbow of pastel colors and gabled, red-tiled roofs. The three- and four-storey buildings lining Handelskade are part of the original Dutch settlement where the merchants plied their trade in the main floor shops and warehouses, and lived on the floors above. Today they are filled with trendy shops, bars and restaurants.

Juví­ra Brí­ceí±o is a guide whose ancestors settled on the island generations ago. “Our forefathers made this possible ““ building here with stones from the sea ““ and this is what we want to say to the world,” she says, proudly. “Everything is made from stone and it is all being restored. There are about 750 buildings that are designated monuments from the period 1635 to 1900.”

I am beginning to understand why the notion of flavours runs so true on Curaí§ao. The historical architecture of colonial Dutch origin mixes with a tropical colour palette. Fruits and vegetables from neighbouring islands pair with seafood pulled from the ocean by Curaí§aon fishermen. On the streets about town, people chat, yell and laugh in a stew pot of languages ““ Spanish, English, Dutch and Papiamentu. Any bar worth its salt has a selection of drinks flavoured with the island's signature liqueur, Curaí§ao, distilled from dried orange peel. There exists a seamless mixture of cultures. A fusion of flavours.

As the afternoon light wanes, it's impossible to resist the best view of the colourful Punda waterfront ““ from the famous pontoon footbridge over Saint Anna Bay, officially named the Queen Emma Bridge, but locally known as the “Swinging Old Lady.” The quiet is broken by the sound of the bell, warning pedestrians that the Old Lady is about to float open to allow boats to pass through. It happens several times each hour.

For me, it's the perfect excuse to head for the wharfside patios, tuck under the shade of a wide umbrella, order a locally-brewed Amstel Bright beer, sample a bit of stewed goat, nibble on some cheeses imported from Holland and finish off with a little grilled pineapple. These flavours that define Curaí§ao ““ they are irresistible.

To learn about and cook local cuisine.
angelicas-kitchen.com