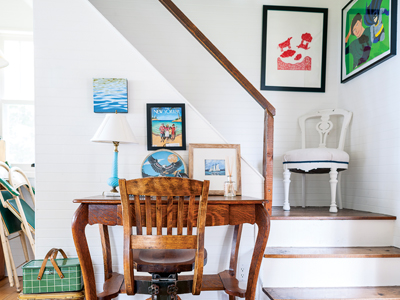 The lake lies before us at the end of the long meandering path carved into a sloping Lake Huron hillside.

When Kate Thornley-Hall first visited this cottage, perched high above Bayfield Beach, she was a child on vacation with her family. Now, her deft designer's touch has gently recreated this one-time childhood summer house to a destination for her own family to enjoy.

Filled with her collected treasures, and designs old and new, the cottage is a place where three generations of her family meet to relax and play.  WEST was invited to visit the “Bayfield Cottage” and see the designer's newest line inspired by The Cayman Islands, where it seems most at ease: a waterside retreat, with just the right mix of casual, elegantly curated style.

When I meet Kate she is all broad smile and twinkling eyes. She greets me with a hug, and we set off to chattering like old friends, and she says, “Let's show Holly the beach!”

“We grew up in Clarkson, and I attended St.Mildred's. We were three children in the family, me being the eldest. Mom was a high school english teacher and she fell in love with St. Mildred's, so that's where we went. Mom could usually be found over at The Oakville Club playing tennis. It really was like living in an old Hayley Mills film; it was a perfect, happy, boarding school life.

“We started going to the cottage when we were all really little. Mom and Dad tried to buy it many times over the years, but the owner would never sell. Eventually, when they retired they bought a home in town, and still live there. My husband and I started renting the cottage for summers, and then eventually the owner sold to us.”

After the bucolic days of youth spent between Clarkson, Oakville and summers at the Bayfield cottage, Thornley-Hall studied english and history at the University of Toronto and eventually found herself living in London, England and working for the creative services department of Ralph Lauren.

“We spent time visiting lots of stores, buying antiques and working on a reno in Bedford, New York that Ralph was doing for himself. We were the team that sourced for the décor of the stores, so it was a great, fun time in my life,” she says.

Time passed and what was meant to be a six-month stay stretched into 19 years. “I met my Canadian husband there, and had our three children. When we decided to come back to Canada it was a three-year plan, but we loved it.”

“We bought a little flat in London so we would always have a base there, but we have never once thought of moving back.”

During those London years with small children, Thornley-Hall decided it was time for her to have a business venture of her own. She took her experience sourcing and buying with Ralph Lauren and slowly built it into the design firm she heads up today.

“It's always best to go with something that you know. I thought I would dream up something different, but it was natural, it just evolved.”

She began offering guided shopping tours to all the fabulous haunts to buy originals and antiques she had learned about. That evolved into design work, first small, and then larger jobs.

“The work continued to grow, and then I started talking out loud about creating a line of rugs for the Canadian market.

“We were on holiday in Jamaica at Christmas with three families. Christiane Lemieux (DwellStudio) looked at me and said, “˜I keep hearing you talk about this. I have a contact that makes rugs. Here you go, now go and do it!'”

That fated conversation led to what is now a line of home textiles that includes stunning hand-woven rugs, pillows and a range of fabric prints that can be custom-made into everything from headboards to handbags.

THE CAYMAN ISLANDS COLLECTION
“In summer 2013 I received a call. My daughter Olivia took the message and said to me, “˜Mom, you want to do this one.' It was Laura Johnston from Fathom Communications asking if I would like to meet and chat about designing a collection for Cayman Islands Tourism. Yes!”

Johnston, owner of boutique PR firm Fathom Communications, based in Oakville, had been following Thornley-Hall and her work for some time. When the opportunity came to select a Canadian designer to work with Cayman Islands and design a Cayman-inspired collection of homewares, she immediately knew who she wanted to work with.

“As a designer you have these ideas of things you'd like. I always thought, “˜I must design an island line,' so when Laura called I jumped at the chance!”

The Cayman Islands Collection by Kate Thornley-Hall shows off her talent as a print designer, headlined by a drool-worthy classic in style toile, the story instead telling the tale of life in The Cayman Islands.

“Antique French toile has always appealed to me, I often collect it and make pillows. I felt it was a natural Caribbean idea, so I designed one inspired by actual places in Cayman. The Old Homestead is in it, as is Rum Point; but also just scenes that caught my eye while I was there: an old scooter, a sugarbird, all things that are Cayman to me,” she says.

The railings at The Caribbean Club, Grand Cayman are the inspiration for the Trellis pattern, available in a variety of lively colours. The feathered friend featured on wallpaper is the Cayman Brac Parrot, and the inspiration for another is the Bloody Bay Wall on Little Cayman, a well-known site for diving.

“The rugs are wool or silk, and all hand-knotted and made in Nepal. I'm very proud of these products, the quality is amazing.”

With the positive response to the line, phase two includes a swim cover-up and beach tote, and then who knows?
“It came together so quickly, it was like it was fated,” she says.

“Here at her Bayfield cottage, pieces from her island-inspired collection are interwoven with prints she made in the past, vintage pieces collected in her travels, alongside new pieces from her favourite designers.

The largest space in the cottage is a cozy family room, fireplace in the corner, generously dotted with Thornley-Hall's exuberant personality. Colour, pattern and texture weave a story here, one that has been whispered over campfires since she was a girl, and that she now shares with her own daughters and son.

The cottage retains its sense of place and history, the original structure built in 1911. The layout and space are much the same as they were when Thornley-Hall was a child, she and her husband choosing to gently make over the space, adding a set of French doors, updating lighting, and of course, lots of paint… and beautiful fabric.

The Kate Thornley-Hall collection is available online at katethornleyhall.com and locally at Cocoon Furnishings, Oakville.