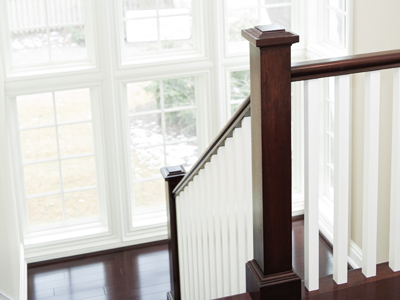 He's the least likely “cult hero” you would expect to see, but he's the real deal. Bryan Baeumler has a huge following, his face is familiar to anyone who watches TV, and his advice is sought by legions of admirers.

He's the Dali lama of the Do It Yourself demographic.

Bryan is a celebrity without the attitude in the stars, however. He has honest charm. Maybe that's because he's a local boy who has stayed true to his roots.

You have seen him on HGTV giving quality advice about renovations on Disaster DIY, a show about do-it-yourselfers who have run into trouble in their own home renovations and are in need of help. You may have seen him building his own home on House of Bryan, or dispensing building wisdom on Leave It To Bryan. His face and his style are highly recognizable. But while his expertise is widely sought after, and he travels all across North America, he is still decidedly a local boy.

Born in Brampton, he lived most of his life in Oakville, attended Appleby College and studied political science and business at Western. He settled down, married a lovely girl from St. Mildred's, Sarah, and began an airline cargo company.

But he wasn't fulfilled. At the end of the day, he would sit at his desk, shifting papers, waiting for the day to be over.

Definitely not his style.
So he quit, did some studying at George Brown, and hung out his renovation shingle.

“It wasn't new ground for me,” he explains. “I grew up around tools. My dad built airplane parts and he was always handy. At 14, I formed a company with some friends called the Moon River Handymen and we worked the summers in Georgian Bay doing all kinds of jobs. It was something I loved and that I was good at.”

“My dad taught me a lot, and he still shows up and helps out, although he is retired. When I first started out, he came outside and pointed at the name Baeumler Construction on the side of my truck and said, “That's my name too. Make sure you don't mess it up!”

Baeumler obviously enjoys what he does now. “A lot of days, I don't feel like I've worked,” he admits. “The shows aren't scripted ““ I'm not an actor. We build things, we build them well, and that is what I love. I am happiest when I am constructing, and I enjoy the attention to detail and to the quality that it demands. There just happens to be a camera along these days.”

“I know the camera crew well now, and frankly, I don't even notice the cameras anymore.”

While his start in television was almost accidental, his career has skyrocketed, due mostly to his personable style and no-nonsense attitude.

“You know, I work hard, and I love what I do. I have young guys come up and ask me how to get ahead in this business of building, and I tell them, “Show up, follow instructions, do things right and work hard. There's no big secret.”

Just now, Baeumler and his partner, Stuart Riley, have finished an Oakville home that was a tear down and complete do-over. Alison Strickland was the architect involved in the project, and Tracy Ray was the designer.

The result is an elegant house that fits perfectly into the neighbourhood. “That's what we do,” says Riley. “We want our houses to fit, not to be a glaring McMansion that stands out like a sore thumb. We try to blend the house into the surrounding neighbourhood organically, to maximize the use of space without going too big.”

This house looks discretely appropriate. The exterior design, natural stone and the gray and white colours echo the aesthetic of other nearby homes, yet the house remains distinctive and unique. With 6,000 square feet of finished living space, it's generous in proportion, with four bedrooms and five bathrooms.

“There's a large loft area that can be converted to living space as well,” says Riley. “The outdoor fireplace and sitting area add additional room.”

The most notable feature, one that makes an immediate impact, is the amount of room that has been devoted to the entranceway and to the hallways. The large central areas give the home a sense of spaciousness and openness.

Dark stained maple flooring contrasts with cream trim and gray/beige walls. The effect is one of calmness and light.

The kitchen is open, moving seamlessly into a great room lined with floor to ceiling windows that look out to the garden. Kitchen cabinets continue the cream tones and countertops are honey-hued granite. The attention to detail and to fine finishing is apparent throughout the house.

The style is clean and semi-contemporary, with traditional elements. When I ask Bryan what style of house he will build next, he smiles, shakes his head, rubs his hand over his closely shaved head. “I don't know. I've just finished a cottage that is ultra modern, and I love it. But each time I do a house, I have new ideas, so I am never done with one style.  Like Picasso. He never painted one picture and then said “˜I'm done.' There are all sorts of interpretations and styles that I want to develop.”

Neither men have much interest in building standard subdivision homes. “That's boring and frankly morally irresponsible,” adds Baeumler. “We want to build a home that will last, both structurally and design-wise. You pay for that, but it is a good investment in the long run. We are in the market for those who know you get what you pay for.”

The partners have plans to expand their Handyman certification service, (baeumlerapproved.ca) where the company will list  approved contractors in your area, present helpful information on what you need to know before and during construction and helpful “how to” videos and links. The approved trades are independent but “Baeumler Approved” will have confirmed references, liability insurance and regulatory certification at the time they are listed on the website. “We hope it rewards contractors who are good at what they do, since we can't physically do all the houses ourselves.”

Both Baeumler and Riley agree that they are a good team, with similar management styles and the same insistence on high quality workmanship. “We are motivated to do our best,” says Riley, “and we have high expectations, but we also like to have fun. We have a core group of skilled trades that we trust, and we physically work hard but we play hard too.”

Baeumler is a guy who is very present. When he's talking to you, he is in the moment, completely involved. And when he's not working, he's off duty. “I don't have an office at home, deliberately,” he confesses. “When I'm home, I'm home.”

Baeumler and Riley also plan to build more homes in the Oakville area, and Baeumler's career in television and public appearances appears to be a growing part of the business.  While he is bemused by his celebrity, he wears it easily and has few illusions.

“The renovations that I do are not reality ““ they're a tiny edited slice of a reno that fits in 21 minutes of edited TV time. That's not how real renos unfold, but I think that viewers can get an idea of what the problems are that they might encounter and maybe we help them avoid some of the pitfalls.”