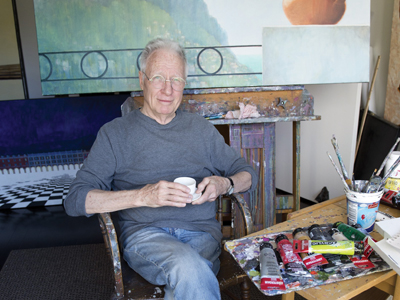 One of the most picturesque settings in the south of France proved to be memorable for artist David Peacock. “We were staying in France outside of Aix-en-Provence and we drove to Montagne Sainte-Victoire where Cézanne painted many, many times,” recalls Peacock. “It was a dramatic sight ““ it was wild and open and windy and stormy.”

As Peacock sat up on a hillside overlooking the mountain, he noticed a little farmhouse in the valley below.

“As I started to paint, the most beautiful sound of Oscar Peterson came out of the house and filled the valley, so I painted for an hour to the tune of Oscar Peterson. It was quite lovely. It was a good place to paint and the music was good,” says the artist, who plays jazz loudly as he creates. Although Peacock no longer has the landscape painting of the small French farmhouse with “great voluminous clouds and a threatening sky,” he remembers it vividly.

Peacock's body of work focuses on architectural landscape, as he prefers to paint doorways, buildings or a village from a distance, reflecting his interest in architectural history.

The Group of Seven influenced his art because of their attitude towards landscape. “I like painting the light no matter what the subject matter ““ it's the light that I'm really painting,” he explains.

David's paintings are on exhibit at Oakville's Trias Gallery (11 Bronte Road, Unit 29) and were recently featured in their Spring Exhibition. The long-time Oakville resident has been represented by Trias Gallery for 17 years, first in Toronto and for the past two years in Oakville, when the gallery opened a few blocks from his home.

After graduating from Toronto's Ontario College of Art and Banff School of Fine Arts, he went into advertising for newspaper, magazine, radio and television for which he won national and international awards as art director and creative director at many leading advertising agencies.

“When I was working freelance, I had a little more time and I decided to paint again,” he says. “I had talked about it for a very long time and finally my daughter bought some paints and told me to “go and do it” and so I did!”

When most teenagers were throwing a ball at the park or spending an afternoon at the lake, Peacock would borrow his father's car, and he and a friend would head to the country. “We set our easels up in the main street of Markham on a Saturday afternoon ““ it was a bit unusual at the time ““ but I always wanted to paint.”

Well-known for his illustrations, Peacock collaborated with his wife, Suzanne who wrote, Old Oakville, a historical study of the architecture of the city's older buildings. Old Oakville sold more than 10,000 copies in hard cover and was reprinted in soft cover. Peacock also illustrated children's books including: The Great Canadian Alphabet Book and he wrote and illustrated, The Sea Serpent of Grenadier Pond.

On Peacock's travels, he carries pastels or a sketchbook and his iPad, referring to those when he returns, instead of carrying paints as he did in his early days. For most of his life, he painted with oil on canvas, but his move to a condominium two years ago changed that. “I thought the oil paint and smell of turps would probably be offensive to the neighbours in the building, so I've switched to acrylic. I can't tell which painting is in acrylic and which is in oil now! The first painting was irregular as I was trying to figure out the medium, but then it was smooth sailing!”