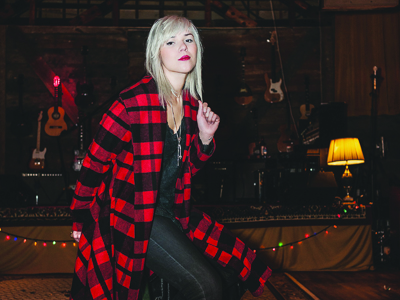 The recording of a first album for any artist can be a somewhat nerve-wracking, but still exhilarating, experience.

Perhaps they've done a bit of home recording in the past and had a chance to dabble at playing at being their own producer. But, when they decide to head into a professional studio and start working with engineers and producers getting paid to make albums, they are likely to find themselves in a whole other world.

When it came time for Ancaster vocalist Laura Cole to get to work on her debut album, the nine-track Dirty Cheat released last summer she didn't have to go into the whole process alone, as she had enlisted the help of her Uncle Danny. Uncle Danny, by the way, is famed record producer Daniel Lanois ““ the guy who helped craft albums that have been both critical and commercial successes for massive international artists including U2, Bob Dylan and Peter Gabriel.

Turns out Lanois grew up with Cole's dad Ron in Ancaster where they went to high school together. She has known Lanois for years, has recorded a song with him, visits him often in Los Angeles and was with him in 2013 when he received the Governor General's Performing Arts Award for Lifetime Artistic Achievement.

While there's a personal friendship and a family relationship with Lanois, Cole admits she was still intimidated by him during the process of working on her album. The fact that Lanois, who served as executive producer on Dirty Cheat, is one of the true heavyweights in the music industry wasn't lost on the young singer.

“The amount of experience and knowledge he has with respect to music is tremendous,” says Cole over the phone from her Ancaster home. “I wanted to make him proud and I have a feeling we really did with this album. It's a little surreal because he could work with anyone in the world but he chose to work with me.”

With an album titled Dirty Cheat, it's no surprise heartache, love and loss are all prominent themes throughout the songs.

“It's sort of an empathetic record,” says Cole. “I know there's a million songs about heartache but this album is really about a girl standing up for herself.”

Cole said she drew on her own experiences but also absorbed and borrowed what some of her friends had gone through when it came to writing for the album. Cole feels that the fact the album reflects on some deeply personal experiences adds an authenticity and sincerity to the music for the listener.

“My heart and soul is on this recording,” she says. “I'm letting somebody into my heart and anyone who listens to it will learn a lot about me.”

Cole says the album is influenced by some of her favourite genres such as Motown and surf rock and certainly has a rock vibe to it.

Her vocals on the tracks, which include “Sweet Escape,” “On My Own” and “The Only One,” among others, seem to be a throwback to an earlier period of music ““ dark and smoky bars from a bygone era ““ but with a contemporary sheen added for good measure.

Dirty Cheat was recorded at Porcelain Records in Hamilton in fall 2013 with Steve Bigas, who was recommended by Lanois.

The album wasn't the first time Lanois and Cole partnered to create music. In 2013, the two collaborated on the single “Papineau” and the singer had a chance to actually write some of it with Lanois before recording it.

“I certainly was nervous doing that because, not only did I want to do the song justice, I did get to help write the back and forth verse between Dan and I,” she says.

Coming from a musical family, Cole started writing songs when she was just a child. As she moved into adulthood, the writing matured and deepened with gained life experience.

While she was always drawn to music (although she briefly considered a career as a doctor before ultimately realizing she needed to follow her heart and pursue music), in her early years it didn't seem like it was in the cards. Cole jokes that she never actually did win any of the talent and vocal competitions she entered when she was a youngster and in high school.

However, that helped motivate her and pushed her to develop her craft.

“I never won a single one,” she says with a laugh. “But, I feel like music is my calling and I think anyone who has a real passion for something feels that way about it. If I won those (contests), would it have been enough for me? I don't think I would have been here today if I had.”