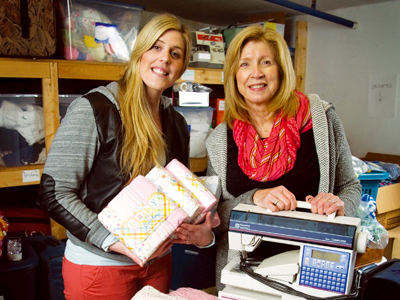 Poverty in the Republic of Guatemala is not only widespread but deeply embedded. Considered extreme within Latin America, the statistics are staggering.  Approximately 51 per cent of the population lives in rural areas, where 80 per cent of the people live below the poverty line ““ of which half that population are children.

It was in 2005 that Linda Coghlin went to Guatemala with a friend. That week would change her life as she knew it.

“As soon as I got there everything I saw told me I needed to see more than those seven days would allow.”

Now 62, Coghlin's previous world was that of a successful businesswoman leading “your better than average Oakville life” with her husband and three children. Guatemala's dire existence soon changed all that.

“When I arrived and worked with the children, I saw firsthand this is a literal live or die society.” With that knowledge, Coghlin took matters in hand and made a difference.

Loving Arms, Coghlin's charity, was founded later that year.  It was incorporated in 2007 and became a Canadian Registered Charity in 2008.

“It happened quickly,” explains Coghlin. “When we returned from that first visit, I did some fundraising for my friend. Next he was asking me to start my own charity. From my trip experience I had the insight into what was needed. From my business background I was already proficient in leadership and organization, plus my abilities included processes and policies and codes of conduct. It just made sense. The responsibility of running a charity is not unlike running a corporation.”

Firstly Coghlin gathered numerous friends she knew possessed the skill set required. Many jumped onboard and in no time there was a team trip of 10 heading back to Guatemala.  Then there were “friends of friends” who became volunteers and formulated committees and organized fundraisers.  And the beat went on.

Loving Arms began its work in the village of Parramos, in Chimaltenango. The organization has since expanded to numerous neighbouring villages. The needs are vast, but Coghlin explains first and foremost is the necessity for education.

“From what I see and the conditions the people live in, my personal needs assessment is that the children be educated. The parents themselves say to me it's the only way their children can live a better life than they have. Having been pulled out of school, adults live on a dollar a day if they work in agriculture. This generation will be the first with an opportunity.”

Coghlin's moment of triumph came when the charity had enough money to purchase a piece of land with an existing facility from which to add a school. Her goal is to have 40 children sponsored in time for the school's grand opening in January 2016.

Loving Arms is guided by two key principles. Short-term: with programs that help families meet their daily needs; and long-term: with comprehensive programs aimed at making the communities self-sufficient to earning an income, which will help break the cycle of poverty. Loving Arms delivers a host of services including education, health, child and family sponsorship, house construction, schools, community centres and income-generating community projects.

From a local grass-roots charity, Coghlin has created a mammoth movement that is unstoppable. With a little help from her friends, she now has hundreds of people on teams, committees and websites and to date the charity has more than 200 sponsored children who receive food and supplies on a daily basis. Team visits are frequent and in larger groups. For a fee they have the privilege to be hands-on, volunteering to focus on needs such as dental, medical, teaching, care giving, building and more.

Generous in spirit, Coghlin believes Loving Arms is what she should be doing. The charity is her life. “I don't do this for accolades and I don't do it to feel good about myself. I do it because I can and there is a need. I actually feel I am now one of them. Though I look different, I understand them. I speak for people without a voice and do for them what they cannot do for themselves.”