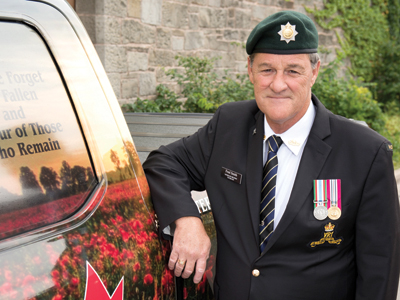 Fred Smith is determined to “put more Freds on the streets” to help homeless war veterans.

“Vets need to know that they don't need to be on the streets,” says the founder of the registered charity, Veterans Helping Veterans. “And I have the power in me to do it,” adds the 61-year-old who served with the 1st Battalion Royal Canadian Regiment in the early 1980s.

Smith knows all too well what life on the streets is like. For six months he was one of the 12,000 Canadian soldiers, sailors and air personnel who served in the Golan Heights, between 1974 and 2006, helping maintain a ceasefire between Israel and Syria. “I was a real mess there and some of the things I saw really messed me up,” recalls Smith. In 1981, two years after he enlisted, Smith left the military. The traumas he witnessed left him “unable to cope with everyday life.” That experience, combined with an abusive childhood and disparate family life led him to reach for the bottle to self-medicate his growing depression and as yet undiagnosed post-traumatic stress disorder (PTSD). Then, he reached for drugs to further douse the pain and feelings of worthlessness. Restless, Smith moved often, living in some of the seediest locales in the country for 25 years; from Hastings Street in Vancouver to Gottingen Street in Halifax and many others in between. Along the way, he admitted himself into 13 different treatment centres. But once in, the focus was always on his drug and alcohol addictions. “I knew how to get sober but not stay sober.”

Smith says he attempted suicide several times. But during his last attempt in 2006, just as he was about to drive his car into the Skyway Bridge in Burlington, the agnostic had what he describes as, “a moment.” That translated into turning the car around and walking into nearby Joseph Brant Hospital. Within three days a doctor finally diagnosed PTSD as a result of his military trauma.

Smith admits to a few relapses into drugs and alcohol since then, but says now he's finally kicked both bad habits and dealt with the PTSD. In retrospect, he realizes the military did have help available to him, but stubbornly Smith resisted it. He's now learned about the resources within the service and within each of the communities where he works. And its information he has readily passed on to fellow veterans he has met on the streets, in shelters and through word-of-mouth. Over the past few years Smith figures he's helped about 3,000 men and women. “All of my despair was a gift, in a way,” he says.

Now the military calls on Smith to keep him abreast of the services they offer to veterans. He heads to Ottawa yearly to meet with the brass and share the stories he hears directly from the vets he meets. The Mental Health Commission of Canada, in a 2014 study, says that among the number of homeless people nationwide, vets likely make up 4.3 per cent of that population.

As well as an attentive ear and empathy and resources, Smith also traverses a 200-mile radius between Hamilton, Niagara Falls and Mississauga to distribute care bags containing underwear, socks, toothbrushes, toothpaste, gum, combs, and $10 gift cards for coffee shops and grocery stores. “If I'm having a bad day I go to the street and find someone to help. It changes my outlook.”

But Smith says he needs more people like him out there to help reach vets who live beyond the communities he covers. “We need to find our lost brothers and sisters and help them.”

For more information about Veterans Helping Veterans, or to donate, visit: veteranshelpingveterans.ca