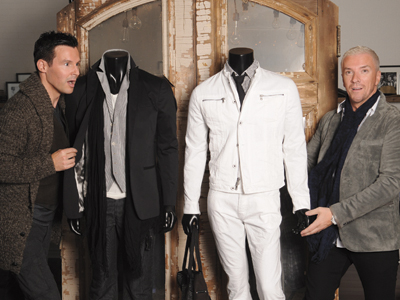 Between jetting in from their London flat and a jaunt to New York, Colin McAllister and Justin Ryan shared their story with us during a whirlwind tour of our fair communities, west of the city.

If you've watched any of their television programs you know this is the case. The décor duo trade quips ““ along with the occasional jab ““ as they complete makeovers to their own exacting specifications. They have an eye for detail and finish work and expect results they can be proud of, and more importantly to them, that the homeowners will love.

The pair made their way into our homes ““ and hearts ““ first with the programs Trading Up and The Million Pound Property Experiment. The BBC series saw McAllister and Ryan use a 100,000 pound BBC investment to buy, renovate and resell homes in an effort to reach a realty transaction value of one million pounds. The program revealed the partners during the highs and lows of the more than two year project, culminating in a sale that exceeded their goal and a resulting donation of the proceeds to charity. Next, the charming duo continued their TV success with How NOT to Decorate, and then became designer darlings in Canada with Colin and Justin's Home Heist. The HGTV series continues to air in more than 30 countries.

Their launch into celebrity was by no means overnight, though. The pair had themselves made over their “tiny flat” and were approached to be interviewed about the process.  After the article appeared, the editor asked what they thought of the piece. When they replied that it wasn't terribly well written, she challenged them to do better. They went about researching, sourcing décor pieces and styling a corner of their own space to be photographed for the article. From there, the assignments continued. And the rest, as they say, is history.

Aside from on screen appearances, their expert design advice and humour can be found in newspaper columns in The Toronto Star, The Vancouver Sun and Sunday Mail.

Most recently McAllister and Ryan launched C and J Home, a range of extraordinarily scented soy wax candles, each created with the care and precision for which their décor-scapes are known. The venture was launched as the pair enjoyed a family gathering at the Ryan home in Beauly, Scotland.

“We had purchased this very lovely, posh candle and as it burned we thought maybe we could do better. We were talking with Justin's sister Colette and her husband Alan, and started to come up with ideas to make a really wonderful product. We've been let down by so many, and think that everything in your home should be really wonderful, indulgent and enjoyable,” says McAllister.

As fate would have it, Alan has a background in chemistry and helped to perfect their candle that combines luxurious fragrance with a long burn time. Eco friendly soy wax along with natural cotton wicks and pure essential oils are combined to create a natural product that is better for you and the environment, with all the luxury and value you'd expect from this pair of perfectionists.

The candles were initially created for the British market, but they have developed a following of mail order business via their website (candjhome.co.uk). C and J Home candles are also available locally at Ellenoire on King Street in Dundas.

“They are in two sizes, and they come with a gorgeous black and silver gift box,” says Ryan. “Our favourite right now is Mandarin & Geranium,” McAllister adds.

These days the boys are keeping themselves busy with a new line of décor and accessories for TJ Maxx, and Homesense in Canada. At press time details were still strictly under wraps, but watch for it in the upcoming weeks at your nearest Homesense location.

While touring a soon to be opened retail store and designer showroom, Ryan runs his hand along some newly installed drywall details, and remarks about the quality of the work; making note of the sharp edge and perfect corners. High standards are just one of the endearing qualities that make up two very genuine and warm-hearted personalities, that are not just made for TV.