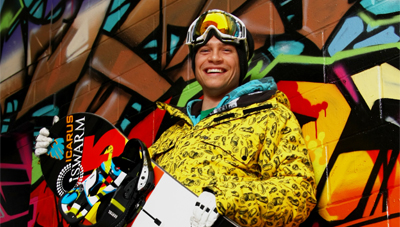 Jeff Batchelor has been dreaming about this moment since he was 10-years-old.

He hit the snow long before that, though. Growing up in a family of ski fanatics, the Oakville native was a regular on the slopes starting from the age of two. At six, he was skateboarding around the neighbourhood with kids double his age, the youngster emulating their moves. When the older kids on his street got into snowboarding, an eight-year-old Batchelor started washing windows for his neighbours so he could pay for a board of his own. When he fused his two passions ““ skiing and skateboarding ““ he found his calling.

It wasn't until two years later, however, that Batchelor, now 21 and one of Canada's top halfpipe snowboarders, started to dream that Olympic dream. It all started with a Christmas gift.

“My parents bought me a Nintendo-64 for Christmas, and the first game I ever played was Nagano Winter Olympics 1998, in which there was a halfpipe event,” Batchelor says. “I had been obsessed with skateboarding and snowboarding even before then, and these were all huge influences on me wanting to take snowboarding to the highest level.

“Yep, a video game inspired me,” he adds, “for all those anti-video game parents out there.”

The event Batchelor focused on through video games nearly 12 years ago is about to play out in real life at the Vancouver 2010 Olympic Games. While Canada's snowboarding team has not yet been announced, the Appleby College graduate and 2009 World Championship halfpipe silver medallist is considered a lock to earn a berth to his first Winter Games.

“It feels great to know that the Olympics are in reach,” says Batchelor, who's currently travelling and competing on the 2009 World Cup circuit. “I still have some things to do before I get there, but I'll be ready”¦just wait and see.”

He's put a lot on hold to make certain of that. Batchelor started his undergraduate degree in commerce at Queen's University in 2006, but decided to take a leave of absence from school in 2008 so he could focus on his snowboarding career.

“School has been my biggest sacrifice,” he says, “although the commerce administration at Queen's University has been very accommodating.”

The World Cup tour means a lot of travel to hit the big events and compete against the world's best, and it also means sacrificing a lot of summer vacations to train. “But I think I can deal with fewer vacations for this dream,” Batchelor says, laughing.

The hard work has paid off. After last season, Batchelor ranked 14th in the world in halfpipe World Cup standings. During the 2007-08 season, he was third overall, and from 2006-07, Batchelor ranked 6th. His last major win was a gold medal on the World Cup circuit in February of 2009 in Stoneham, Canada.

A four-time World Cup medallist, Batchelor says joining the national team was a big step, but he owes a lot of credit to his private coach, Jesse Fulton.

Batchelor has been working with Fulton the last three years, and hired him “to take me to the next level,” as he put it. “And that is just what he has done. He's a super rad guy all around, and he motivates me to be the best.”

Back when Batchelor was playing Nagano 1998 video games, Fulton nearly made the real thing. He turned pro at age 14 and qualified for the Olympics, but rule changes meant he needed a second qualifier, and he missed out by a narrow margin. After retiring, he came back to coach and now has several national team members under his wing.

It's with the help of Fulton and a trampoline coach at the Oakville Recreation Centre that Batchelor developed his marquee move, The “Batcheloroll.” It's featured on his website ““ jeffbatchelor.com ““ and it's one of those high-flying moves you have to see to believe, although Batchelor does his best to explain it.

That's on the roster as he prepares for the Vancouver Olympics, along with a few other moves he has up his sleeve for the halfpipe. “I'm about to attempt another switch double, but we'll see about that,” Batchelor says.

Whatever tricks he pulls down that halfpipe, expect Batchelor to go at it full throttle. He's known, he says, for “being relentless and charging the pipe as hard as I can.”

“I was told I almost broke a world record for highest air in the halfpipe the other day, so I guess going big is one of my strengths,” he adds.

The key to competing among the best in the world is repetition and hitting the halfpipe as often as he can, Batchelor says, and there's nothing he'd rather be doing.

“Snowboarding is a fun-driven sport, and if it weren't fun”¦I wouldn't be doing it,” he says. “There is so much room for progression and trying new things, which keeps me interested. It's one of those sports where you can go out and have fun with your buddies, and let loose.

“The world-cup circuit is another story,” he adds. “It can get pretty wild, especially when it comes to celebration time.”

As Batchelor gets closer to that dream he developed at age 10, while he may get major air in the halfpipe, he's keeping grounded in another sense as he gears up for his Olympic debut in Vancouver.

“Honestly, I have no idea what it will be like competing at my first Games at home. I'm assuming it will be a bit easier as there is a lot more support. I'm going into the Games with the notion that it's just another contest. As soon as you start hyping it up, it becomes something else, and I want to be as comfortable as possible when I show up,” he says. I'm stoked to be able to compete for Canada in Canada. Yes, this is my first Olympics, but to tell you the truth, it's just a glorified World Cup with a few more insane riders put into the mix.”