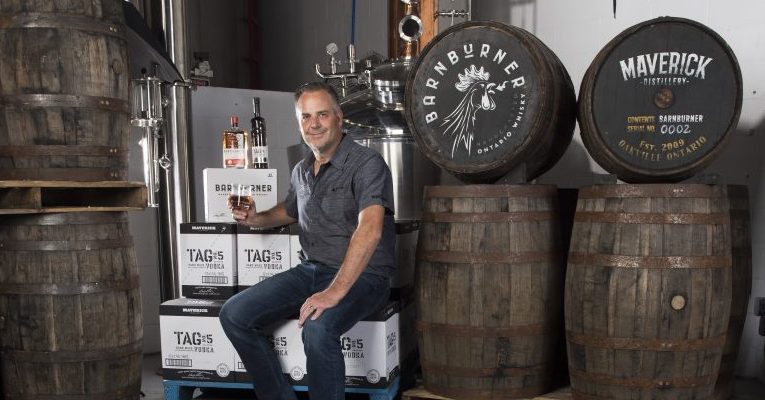 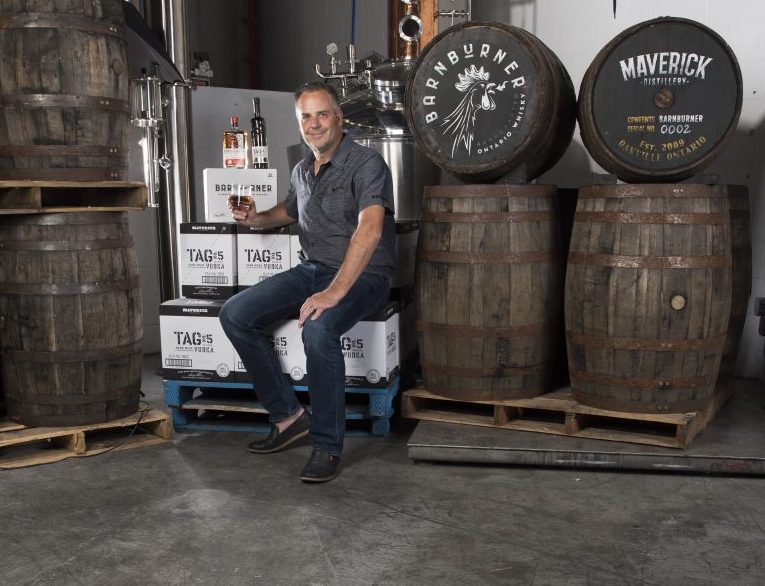 Move over craft breweries, craft distilleries are finding shelf space at the LCBO, and Maverick Distillery was first out of the gate with TAG Vodka. Now the company’s second – and third – lap around the track involves whisky and gin, both sporting unique flavour profiles and clever branding strategies. Get ready for small batch spirits.

What does these mean for cocktail consumption? We ask an expert, specifically Craig Peters, chief vodka officer at Maverick Distillery.

Maverick Distillery, the largest craft distillery by volume in Canada and still entirely family-owned, has been making TAG Vodka in Oakville, Ontario for 10 years. “It takes about 15 years to be an over night success in this industry,” Peters says. “Hopefully, we’re more than halfway there.”

Fourteen years ago, Peters and his wife Sally Peters moved to Ontario from the east coast, fell in love with Oakville and opened Maverick Distillery four years later after leaving the advertising field – though not entirely. Marketing and branding are a big part of TAG Vodka’s success.

“We were the first distillery license issued in Ontario in 20 years,” Peters says. “We saw a big opportunity to develop a Canadian vodka.”

Watch for TAG Vodka at an event near you, including West of the City’s Frayed Fashion Show on Oct. 6 at Budds’ Imported Cars. Maverick’s primary promotion method is sponsorship of regional events, charities and fundraisers. Hometown support is fundamental to the brand.

We are a locally crafted product and local craft products are extremely popular currently, whether that’s beer, wine or spirits. Oakville has been very supportive of locally produced products including TAG Vodka.

TAG is 100 per cent corn-based vodka. We use sweet corn from Southern Ontario. Traditionally, you make products with what you have around. They have potatoes in Eastern Europe; here, corn is plentiful. The liquor is silky in texture emphasizing the sweetness of the corn.

TAG is unique because it’s filtered through birch charcoal which smooths the vodka. We did a blind taste test with LCBO employees and 75 per cent chose TAG vodka over Grey Goose. Being corn-based, TAG is also free from wheat gluten.

What vodka cocktail do you recommend?

The Moscow Mule is a popular cocktail right now, but I recommend mojitos. They’re traditionally made with rum, but substitute vodka for rum and you’ve got a great summer drink.

But the best way to drink vodka is with soda and a twist of lime. Vodka Soda is the number one cocktail right now in the mixed drink category. It’s also the lowest in
calories, which is fueling the trend. You can’t go wrong with a classic martini or a vodka tonic with a twist of lime either.

Reducing our carbonfoot print is a concern for us. TAG Vodka comes in three sizes and the largest is bottled in a plastic PET container made in Ontario. The bottle’s production has the lowest carbon foot print and PET is the plastic most recyclable.

Why select craft distillery spirits instead of the traditional established brands?

Large familiar named companies are factories, with different concerns. Working in a craft distillery allows you to work with fresh ingredients and put more care into the production of small batches and focus on taste. That’s very true of our latest product: gin.

Gin is the fastest growing spirit category and is very popular in Britain right now. Maverick launched Gin Slinger in the fall of 2019, and it’s a unique gin. Gin Slinger utilizes botanicals from the Niagara Escarpment, gathered by a professional forager. (Yes, there is such a thing). The gin contains ten botanicals in total, some imported because they don’t grow here.

All gins are juniper based. But we are cold pressing the juniper – new to the gin space – adding a freshness and creating a significantly richer taste profile. This is not a subtle gin – it’s a full bold flavour designed for the gin drinker. It will stand out.

What is the most popular spirit in Canada?

Whisky is the spirit consumed the most in Ontario, with vodka a close second. So, whisky is a nice addition to Maverick’s offerings. Canadian whisky must be aged three years, so we started Barn Burner whisky four years ago and it was released in 2018 to favourable reviews. Barn Burner is now in 300 LCBO stores.

Barn Burner Whisky is unique and was a special project for us, years in the making. It’s made with corn and rye grain, aged for three years and double barrelled in bourbon barrels bought from Kentucky.

What is the best way to drink Canadian whisky?

Drink whisky on the rocks, no question. Or in a Manhattan, but on ice is best.