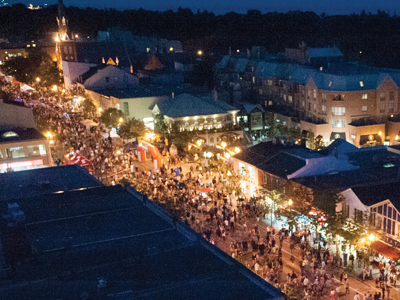 JULY
Movies Under the Stars
Thursdays until August 20
All movies start at 9 p.m.
Parks throughout Burlington
Curl up to Burlington's annual summer event Movies Under the Stars presented by Tim Horton's, taking place every Thursday at parks throughout the city. This popular event is the perfect way to spend evenings with family and friends so come early to reserve a spot and be sure to bring lawn chairs and blankets! This year's films include Big Hero 6, Maleficent and Home. Rain delays/cancellations may occur.
burlington.ca

Midnight Madness by Scotiabank
July 17
From 6 p.m. to 12 a.m.
Downtown Oakville
Oakville's largest retail event of the year, Midnight Madness features live music, entertainment, food and shopping over six city blocks. An evening of family entertainment and deals from your favourite shops will be available until midnight.
oakvilledowntown.com

Burlington Beer Festival
July 17 to 19
Friday from 4 p.m. to 11 p.m.
Saturday from 12 p.m. to 11 p.m.
Sunday from 12 p.m. to 8 p.m.
Spencer Smith Park, Burlington
The first celebration of the craft beer community in the region, the Burlington Beer Festival returns to Spencer Smith Park from Friday, July 17 to Sunday, July 19. This rain or shine event brings 24 beer vendors from around Ontario to the downtown core alongside local food vendors like The Purple Heather Pub and Table 34. General admission, VIP and weekend passes are all available, go online to purchase and for more information.
burlingtonbeerfest.com

JerkFest
August 8 & 9
Gates open at 11 a.m.
Centennial Park, Etobicoke
Jerk cuisine and the pulsating music of the Caribbean come together in this annual festival, taking place at Etobicoke's Centennial Park. Take part in one of the many competitions like the Grace Hot & Spicy Jerk Chicken Eating Competition and the Western Union Drop-A-Six Domino Challenge, or, tweet or Instagram your experience with #JerkFest2015 for your chance to win a series of prizes. Go online for ticket pricing.
jerkfestival.ca

Port Credit Busker Fest
August 21 to 23
Friday from 7 p.m. to 11 p.m.
Saturday from 1 p.m. to 11 p.m.
Sunday from 1 p.m. to 7 p.m.
Port Credit
Port Credit's Busker Fest celebrates its 10th anniversary this year with over 40 professional Buskers, eight staging areas, four spectacular fire shows and lots of “surprise fly pitches” throughout the city”“ not to mention the incredible Xtreme Finale on Sunday with every Busker performing to support local charities!
portcreditbuskerfest.com

Mississauga Italfest – Ferragosto in the City
August 22
From 12 p.m. to 11 p.m.
Celebration Square, Mississauga
Join in the celebration of fun, food and festivities at the second annual Mississauga Italfest. This free event is expected to draw approximately 15,000 visitors interested in experiencing “la nostra vita” (our life) through performances, children's activities, cooking demonstration, bocce and scopa tournaments and other traditional Italian past times.
mississaugaitalfest.com

Winona Peach Festival
August 28 to 30
Friday from 5 p.m. to 11 p.m.
Saturday from 10 a.m. to 11 p.m.
Sunday from 10 a.m. to 6 p.m.
Winona
Now in its 48th year, the Winona Peach Festival welcomes 125,000 visitors over three days during the last weekend in August. Dive into a variety of peach themed foods like crêpes and pies while exploring the midway, arts and crafts area with over 75 vendors, “Peach of a Car Show,” live entertainment and more. Though peaches are the theme, there will be a large variety of other foods available to bite into so come hungry!
winonapeach.com

SEPTEMBER
Canada's Largest Ribfest
September 3 to 7
Thursday from 6 p.m. to 11 p.m.
Friday to Sunday from 11 a.m to 11 p.m.
Monday from 11 a.m. to 8 p.m.
Spencer Smith Park, Burlington
Canada's Largest Ribfest, organized by the Rotary Club of Burlington Lakeshore, is celebrating its 20th year this Labour Day Weekend with a four-day food extravaganza! As one of the leading annual events in the GTA, Canada's Largest Ribfest brings together 18 Ribber Teams from across North America, hungry to compete for the Best Ribs Title, and more than 150,000 people hungry to taste their mouth-watering fare!  There are also great musical guests, and activities and games for kids of all ages. Proceeds from this event go directly to the community ““ a good cause, good food, good times and the perfect way to bid farewell to summer.
canadaslargestribfest.com

Hot & Spicy Food Festival
September 4 to 7
Harbourfront Centre, Toronto
This year marks the 18th anniversary of the Hot & Spicy Food Festival.  Exploring food and culture rooted in the past and renewed for the future as it continues to relate to cultural expression. Enjoy a range of culinary delicacies, as well as hot rhythms and spicy grooves from the past and present. Don't miss Vikram Vij on Saturday, September 5 as he cooks up Vij's Family Chicken at a free demonstration. Admission is free, go online for specific performance details.
harbourfrontcentre.com