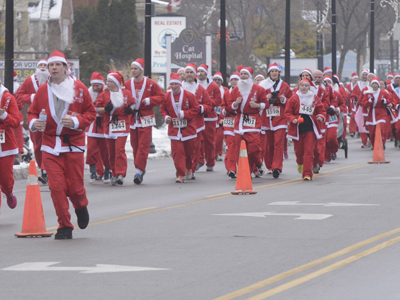 Enjoy the season and keep your holiday merry and bright with this roundup of local winter and holiday-themed events.

Milton's Heritage Parade
of Lights
Saturday, November 14 & Sunday, November 15
6 p.m. to 9 p.m.
Country Heritage Park, Milton
Take in the spectacular parade of vintage tractors and machinery decorated with festively coloured lights and go on tractor drawn wagon rides. After the parade warm up in the heated Gambrel Barn with hot chocolate and cookies and meet Mr. and Mrs. Claus! Be sure to dress for the weather as a portion of the day's events take pace outdoors. Admission by donation.
countryheritagepark.com/events

An Ireland Family Christmas Special Event
Sunday, November 15
11 a.m. to 4 p.m.
Ireland House Museum, Burlington
Join the Ireland House Museum for an old-fashioned Christmas with the sounds, smells, tastes and sights we've come to associate with the season. Warm yourself by the fire, watch and sample heritage Christmas baking demonstrations and participate in crafts and activities such as the making of woodcut snowman (for an additional charge), Victorian Pomanders, tin ornaments and holiday door decorations. Step inside Santa's Cabin for a visit with Mr. and Mrs. Claus, go on horse and wagon rides, and watch the live musical entertainment throughout the day. Go online for more details and pricing.
museumsofburlington.com

United Way of Milton's Christmas House Tour presented by Springridge Farm
Saturday, November 21
10 a.m. to 4 p.m.
What a great way to get into the holiday spirit!  Visit seven homes that have been professionally decorated for Christmas showcasing the latest trends in Christmas décor and holiday entertaining. Taking place on November 21, tickets are available for purchase for $32.40 each at The United Way of Milton office at 1 Chris Hadfield Way, by phone at 905.875.2550 and online.
miltonunitedway.ca

Bronte Village Annual Tree Lighting & Carol Sing
Saturday, November 21
4 p.m. to 6 p.m.
Centriller Square, Bronte
The holiday season is more relaxing in Bronte Village and parking is free. Listen to Victorian carols as they're sung throughout the village, dance and get your photo taken with Mr. and Mrs. Claus, snap pictures in the Holiday Memories Photo Booth and let the kids create with Kiddie Holiday Crafts. Join the Tempus Choral Society in the Traditional Sing-Along as they sing in the season at the Annual Tree Lighting festivities.
brontevillage.net

Burlington's Santa 5K 2015 Run
Saturday, December 12
9:05 a.m.
Participants run 5K through downtown while dressed as Santa! Anyone who decides to de-Claus mid-run will be disqualified, so maintain your holiday cheer by keeping those red velvet suits on. Proceeds from the run will help support your selected charity of choice, go online for pricing and to register.
santa5k.ca

Christmas Craft &Tour
Tuesday, December 29 & Wednesday, December 30
1:30 p.m. to 2:30 p.m. & 3 p.m. to 4 p.m.; $5
Enjoy a 1.5 hour visit to the beautifully-decorated historic Erchless Estate on December 13 where you will get a guided tour through the home and be able to view the feature exhibit followed by tea and cookies. The tour is $7 per person ages 3 and up, children must be accompanied by an adult. On December 29 and 30 stop by for an hour's worth of afternoon craft making and a guided tour of the Oakville Museum. Each session will make the same craft and take the same tour.  For children ages 4 to 9.
oakville.ca

Courage Polar Bear Dip
Friday, January 1
First wave plunges at 2 p.m.
Coronation Park, Oakville
Hundreds of people jump into the icy cold waters of Lake Ontario at the Courage Polar Bear Dip each year while thousands watch and cheer them on. Some show up for the incredible festival atmosphere, some want to try something a little over the edge to ring in the New Year, others just want to get their faces and crazy costumes in the local and national media. No matter what brings them to Coronation Park on January 1st, each dipper is helping raise funds for a great cause. Net proceeds from the Courage Polar Bear Dip have been given to World Vision Canada since 1995. In that time approximately $1,201,000 has been raised and has funded clean water projects around the world. Proceeds from the 2015 dip will support the Rwanda: Right To Clean Water project in Gashora and Rugarama.
polarbeardip.ca

Santa Claus is coming to town!

Milton Santa Claus Parade
Sunday, November 15, 1:30 p.m.
miltonsantaclausparade.ca
Since the first parade in 1933, Milton has been a stop on Santa's annual parade route. Don't miss out on all the festive fun, bring your loved ones to this historic parade as it travels along Milton's Main Street. Bring your letters to Santa to the parade and Canada Post will collect and deliver them!