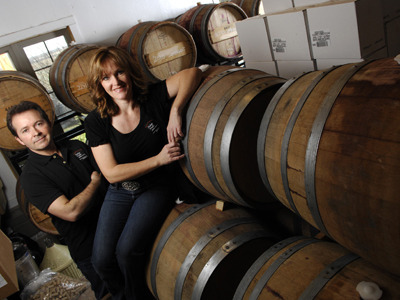 “It was now or never,” Sean Douglas of Ridge Road Estates Winery says, “I needed to take the leap.” The grand vault he's referring to is one many of us dream about but few hold our breath and jump. For 20 years, Sean worked as an accountant in the banking industry, and his wife Jayne was an interior designer and social worker. Then last July both committed themselves full-time to their true passion (next to each other, of course): wine making. Ridge Road Estates Winery formally opened its doors in September of 2009 and now it's a full-fledged family-run business enjoying the complete attention of both owners.

It was a dream 25 years in the making.

Burlington residents (but Niagara Escarpment enthusiasts) Jayne and Sean Douglas plan to turn this up-and-coming boutique winery into a regular destination for those living and travelling through the area. There's a growing interest for all things local, the couple says, and they plan to benefit from this trend, and participate in it as much as possible by sourcing local produce and utilizing the talents of neighbouring musicians. Located on 60 acres of property (12 currently growing grapes), Ridge Road is a shiny new dark-wood and orange-accented addition to a growing list of Southern Ontario wineries, specifically escarpment wineries that are keeping the agricultural traditions alive in some of the province's best growing soil.

There are two distinct grape growing areas in the region: Niagara-on-the-Lake and the Bench area on top of the escarpment. According to Sean, wind patterns that flow up and over the escarpment (represented in Ridge Road's orange dotted line in the logo) keep the temperature at the right level. But more importantly, the mineral condition of the soil produces unique grape flavours. “We plant what grows best here,” Sean says, “such as Rieslings, Chardonnay, and Pinot Noir.”

This is a tasting winery, where this charming couple (who finish each other's sentences with jovial enthusiasm) spends seven days a week, May to December, producing small batch vintages and greeting guests with a smile, pouring free samples, vetting questions and encouraging people to expand their wine tastes and vocabulary. “Where's the Merlot?” is a question too common in this couple's opinion. “The majority of people who visit the winery aren't wine experts,” Jayne says. “But that's not what we are about. Some people who come to the tasting bar might be intimidated, but we are trying to eliminate that. The education we give each customer is about finding what they like. That's ultimately what's important.”

“We have some gold medal winners that won't appeal to some people's tastes,” Sean adds. “There are two things people should know about a wine: you like it or you don't.”

Like most craft wineries, they are exceptionally proud of the awards they've won and are encouraged by the number of wines from Ontario being promoted and entered in national and international competitions. Last May, the winery won two gold medals at the 2010 All Canadian Wine Championships. “Last year was super hot and super dry and great for reds,” Sean says. Ridge Road plans to focus on what works best in the clay loam soil on top of the escarpment. The bottled results includes a quiet Chardonnay, a fruity tropical Riesling, a cheeky Cabernet called Call me a Cab and ­”“ the crown jewel ­”“ Vineridge Blend, a unique blend made from Traminette grapes.

“It's not often you get to taste something totally different,” Sean says as he pours a glass from this unusual varietal. Ridge Road is one of a few wineries growing this type of grape ““ a hybrid developed at Cornell University to grow well in New York State (and region).

But back to the dream.

The property Ridge Road is on has been in Jayne's family for generations, dating back to the 1800s. Her great, great grandfather was E.D. Smith, and her grandmother hung onto this land because she wanted to keep it in the family, and keep it a farm. Fruit trees from the original orchards still mingle with brush along the edge of the property barely in view from the back window of what is now the main building and the couple plans to keep it that way.

“Twenty-five years ago,” Jayne says, “We took a trip to France and that's when it all started for us. We always knew this property was here and possibly available, and we thought a lot about it.” During that time, Sean studied viticulture and winemaking at the University of Guelph, practiced with other aspiring vineyard owners and gradually constructed the main two-story building that today hosts the wine-tasting bar and barrel storage facilities. That project took six years to finish ““ a hobby he calls a “˜stress release.' For nine years, before producing their own wine, the couple learned of the soil's capabilities by growing grapes and selling them to hobbyists in the area. Now, all that's harvested goes into their own bottles, and business.

Sean and Jayne's four kids (ages 8 to 12) spend their weekdays in Burlington living the suburban life, then on weekends the entire family inhales clean country air on the farm. “Our kids basically spend May in the pond outside,” Jayne says. “There are bullfrogs in there big enough to pick up with two hands.”

This summer will see the winery develop ““ with the help of the conservation authority ““ a self-guided walking trail through the back of the property to a waterfall nearby. An expanded backyard patio will sell wine by the glass along with local artisan cheese plates. Add to that the occasional night of jazz concerts and barbequing. There's a lot of possibility now that this is a full-time project of passion and persistence, and they are even renovating a “˜special event' room on the second floor of the tasting building.

Also, another product the winery is pioneering along foodie trail is the cultivation and distribution of Verjus, a culinary by-product of wine-growing popular in Europe that uses the grapes that must be removed from the vines half way through the season. These grapes are then pressed and made into a sweet, non-alcoholic liquid that can be used in recipes as a replacement for vinegars, lemon juice and in salad dressings. According to Sean, Verjus is a wine connoisseur's dream because it doesn't distract or affect the taste of the wine drunk with dinner like vinegar or oil-based dressings can. For those a little hesitant, Ridge Road provides numerous recipes for dipping oils and dressings to help the uninitiated embrace their inner Verjus lover.

Concerts, nature walks, and bird watching are all added bonuses of a business along the ridge. “But at the end of the day, it's about the wine,” Jayne says. And it's unlikely that will change anytime soon.

See it Live!
Sample the tastes of Ridge Road Winery for yourself at West of the City's Girls Night Out on Wednesday, May 25 at the Oakville Confernece Centre. For more details visit www.westofthecity.com