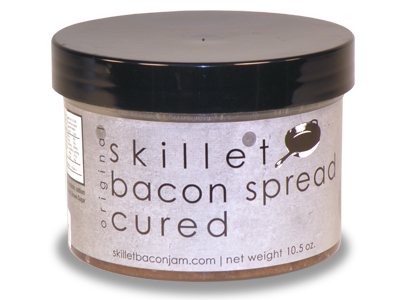 Bacon and jam are two things generally loved by all, but have you ever thought of mixing them together? Josh Henderson, Skillet Street Food owner and chef did, and we couldn't be more thankful. Bacon Spread by Skillet Street Food was first introduced through Henderson's use of the spread on his Seattle-based food truck's burgers. Consumers loved the unique taste, made from rendered quality bacon, spices, and onions that simmer for six hours before being pureed and blast chilled and packaged. The spread is so delicious that Martha Stewart and Rachel Ray have both mentioned it on their shows as a must-have product. Skillet Bacon Spread is available in Original and Fennel & Black Pepper at Cousin's Food in Mississauga, and Jubilee Fruit Market in Oakville.