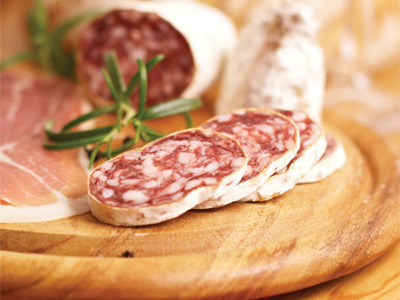 Leave it to the French to come up with such a cultured sounding term for the craft of preserving meat, something practiced since the Roman Empire. But, then again, everything sounds better in French. The word “charcuterie” essentially means the product from a butcher and comes from the words, chair (meat) and cuit (cooked). Long before fridges and iceboxes, the charcutier practiced this necessary art in the Middle Ages.

Michael Ruhlman, author of Charcuterie, states that preserving meats has been a “foundation of human survival.” Thousands of years ago, “it allowed societies to maintain a food surplus and therefore helped turn early peoples from nomads into clusters of homebodies.”

Charcuterie once consisted mainly of pork, but modern charcuterie now describes a wide range of processed or cured meats (through salting, smoking, brining or cooking), including sausage, prosciutto, poultry, venison, vegetables, fish, foie gras and pate ““ and even bacon, beef jerky and lox.

The popular products and processes of the French Charcutiers spread to neighbouring regions. Frankfurt, Germany for example, became famous for the “Frankfurter,” a smoked sausage; a hot dog is an American version of the Frankfurter served in a bun. Genoa Salami and Bologna were produced in Genoa and Bologna, Italy.

Travellers from Europe to the United States brought the techniques they had learned with them and they applied them to the natural resources they discovered. Pennsylvania became famously known for its sausage preparation. All the while Virginia was known for its fabulous cured and smoked hams. Eventually, all throughout the states, everyone had their own variation on the classics.

Before being sliced or served, glistening on the platter, meats must be cured. Salt has four major purposes for food preservation in the charcuterie kitchen, including osmosis, dehydration, fermentation and denaturing. Osmosis aids in the destruction of harmful pathogens in the flesh; dehydration promotes a better shelf life because there is less moisture in the protein for bacteria to form; fermentation halts the actual fermenting of the meat, and denaturing changes the structure of the meat's proteins, a process similar to what happens during cooking.

It's Nitrate to Meat You

Nitrates and nitrites are chemical compounds commonly used in making cured meats.  Nitrates take much longer to break down in foods than nitrites, which makes them a more widely used preservative for curing and drying. Nitrites are used in foods that require a shorter curing time and a food that will be fully cooked.

Nitrite serves several purposes for curing: for flavour ““ nitrites promote a sharp, piquant flavour, they react with substances in the meat and produce nitric oxide, which prevents iron from breaking down in the fat, halting rancidity.

Many spices and herbs are used alongside the curing process to add flavour as well as tone down the harsh flavours of curing salts. Sweet spices used include cinnamon, allspice, nutmeg, mace and cardamom. Other accompaniments include dried or fresh chilies, wine, fruit juice, vinegar, dextrose, sugar, corn syrup, honey and maple syrup. Dextrose is often used because it increases the moisture content of the cured meat, while sweeteners themselves also help stabilize the colours in meats and aid in the fermentation process.

Common offerings of a charcutier:

Boudin: a French word for both pudding and meat sausage. Boudin blanc, or white sausage, is a made of veal, chicken, or pork. Boudin noir refers to pork blood sausage.

Head Cheese: a terrine of meat from the head of a calf or pig as well as sheep or cow. Originally it was made entirely from the meaty parts of the head, but now can include meat from the feet, tongue, and heart. It is usually eaten cold or at room temperature as a luncheon meat.

Galantine: boned meat or whole poultry stuffed or rolled, then cooked and glazed with gelatin and served cold. The meat is not ground like pate and it is not spreadable.

Pate: meaning paste, denotes a gourmet seasoned ground meat of duck, fish or vegetables for spreading (either on bread or toast), and served hot or cold. They can be wrapped in fat or pastry. Traditionally pate is wrapped in pastry and the meat lined with fat is called terrine.

Mousse: a light, airy mixture of sweet or savoury meats also containing eggs and cream. It is much lighter and spongier in texture than a pate, and therefore more spreadable for hors d'oevres.

Poitrine: a breast of meat or poultry, and also refers to bacon. Poitrine demi-sel is an unsmoked bacon slab, while poitrine fumee is smoked bacon and poitrine roulee is rolled bacon.

Rillette: a densely spiced poultry spread cooked in seasoned fat and minced or ground into a paste and served with crackers or bread. Classic French rillettes are pork or rillettes d'oie, goose; but the spread can also be made with duck, fish or rabbit. After the rillettes are made, they are commonly placed in a ramekin and sealed with a thin layer of fat.

Terrine: an earthenware dish named after the French word terre (earth), the vessel in which this meal has been prepared Traditionally, pates baked in pastry were made in long, loaf-shaped earthenware terrines, but they can also be made of vegetables. Today, metal forms with releasable sides are often used for ease in removing the pate.

You can still enjoy the tastes and textures of charcuterie through vegetarian options such as pates, pepperoni, bacon or sausage made from soy and cereal, without preservatives or nitrite.

Arrange the meats and other items by flavour, shape, colour or size. Serve with crusty bread, grainy mustard and cornichons, then create as many variations as you wish and enjoy.