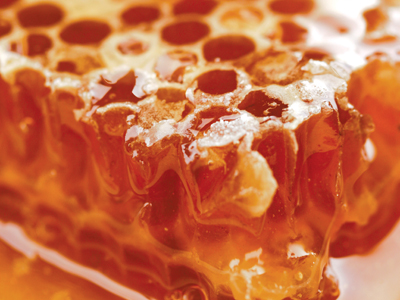 You can't blame Winnie the Pooh for getting his head stuck in that hunny pot, or for doing everything he could to raid the beehive in the honey tree. One of our favourite childhood characters spent most of his time trying to get his paws on the sweet and sticky golden stuff because he had a point: honey really is that good.

It turns out we have more in common with Pooh Bear than we thought: almost one million tonnes of honey are made worldwide every year, 36 million kilograms in Canada alone. That's because this carbohydrate-rich natural alternative to sugar is in high demand, and you'll find it everywhere from the kitchen cupboards to the bathroom. Consider the daily uses: as a natural sweetener in tea, drizzled on yoghurt, the perfect partner to a peanut butter sandwich, a liquid to help soothe a sore throat. There are honey-flavoured cereals, breads, teas, cough drops, and even potato chips.

And that's just for consumption. You'll also find honey in moisturizers, bar soaps, conditioners and hand lotions because of its ability to retain moisture. Perhaps its greatest asset is an impeccable ability to fight off bacteria. If you accidentally bury an extra jar of honey in the cupboard and stumble upon it years later, have no fear: as long as it's covered, honey never  goes bad. When archeologists found 2,000-year-old honey jars in Egyptian tombs, it was still good. If it's crystallized, a quick zap in the microwave will do the trick. It doesn't take long to realize why honey's known as “˜the miracle food.'

Sweet origins
Bees have been producing honey since we've been recording history. Honey dates back to 2100 B.C., and historians say it's likely even older than that. The first and most popular sweetener used by man, honey was not only consumed in those days, but also to polish furniture, as a medical alternative, and even to make cement. The honeybee is thought to be native to the Americas, but in 1600 A.D., Central Americans were already well into producing honey. The nickname honey has an origin, too. If you call your significant other by that name, you have Cupid to thank. Legend has it he dipped his love arrows into honey before firing them at a pair he'd chosen, destined to fall in love.

Bzzzzz
Bees collect nectar when flowers are in bloom in the spring to provide food stores for the hive during the winter months. Luckily, a beehive produces more honey than it can eat, and that's where beekeepers come in to harvest that honey for consumption.

As for the term “˜busy as a bee,' it's impossible you've ever been that busy. The amount of work that goes into producing just one pound of honey is remarkable. This will make you think twice when you raise your eyebrows at the price of honey in the grocery store: Some 60,000 bees travel more than twice the circumference of the earth ““ more than 55,000 miles ““ and go to work in more than two million flowers, collecting pollen and nectar. A bee propels itself 15 to 20 miles per hour, batting its four wings (yes, bees have four wings) upwards of 190 times every second, which produces that distinctive buzzing sound. Once they ingest a flower's nectar, it mixes with proteins and enzymes in the bee's stomach, which turns the nectar into honey. The bees drop the honey into a beeswax comb inside the beehive, and then they buzz off to repeat the process until the honeycomb is full.

The colony of bees ““ one queen, drones and workers ““ is always hard at work. The queen can lay upwards of 3,000 eggs in a day thanks to mating with the drones. The workers, of which there are about 50,000 to 60,000 in the colony, are the sexually underdeveloped females whose main job is to collect nectar. Their life expectancy is only about 40 days and in her lifetime a worker bee will only produce about 1/12th of a teaspoon of honey. All that hard work over a worker bee's short existence doesn't even yield enough honey to put in your morning tea. That kind of information should make a bee's sting forgivable, shouldn't it?

Types
The honey in the squeeze bottle shaped like a bear at your local grocery store is a tiny sample of what's out there. There are various states of honey: comb, liquid, naturally crystallized and whipped. The rule of thumb is the darker the honey, the stronger the taste. Lighter honeys are generally sweeter in flavour. Honey can be dried, flavoured, fruited, and even infused with herbs and spices. Artisans have tried just about everything ““ just check out the specialty honey market.

Local sweetness
Right in our own backyard, Dutchman's Gold in Carlisle, has been producing and selling honey for more than 50 years. There are more than 300 different kinds of honey in North America alone (many of them are hard to find), but at the local retailer you'll find some of the best-known honey in Canada: summer blossom, wild flower, buckwheat, blueberry blossom and more. Dutchman's Gold also offers honey in one of its purest states in raw honey blends. It means the honey is extracted from the comb and bottled. You may run into a piece of wax or two, but the result is a fresh taste.

Buckwheat
This is a unique honey from Manitoba's buckwheat flowering stalks that's almost black in colour. A full-flavour honey, it's full of anti-oxidants and is a great complement to pancakes, muffins, porridge and toast.

Blueberry Blossom
There are subtle hints of blueberry in this mild honey. The bees in Ontario and New Brunswick visit blueberry shrubs not only to gather the nectar that produces this unique honey, but their work also more than doubles the potential yield of the blueberry shrubs.

Comb Honey
It's exactly at it sounds ““ straight from the honeycomb, in its original form. Chewing on this honey wax is a great treat for anyone battling a sore throat.

Summer Blossom
This is one of the most popular honeys on the market, a mild-tasting natural sweetener from the nectar of a range of origins including canola and
basswood trees.
RECIPE: Honey Mustard Salad Dressing