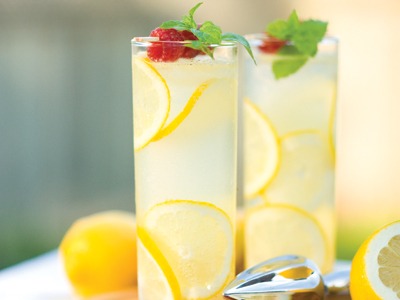 This summer enjoy these sunny orbs of citrusy goodness with tartness that sets your taste buds in motion.

Lemons may have not-so-nice connotations in the automotive industry or an iffy semblance for those who need a little reminder to think positive when life gives you lemons, but not in the culinary world. Lemons are revered like the sun ““ especially in the summertime. They're sunny orbs of citrusy goodness; tartness that sets your taste buds in motion; an empowering scent that evokes a sensation of cleanliness. They hold their own in a pie, a martini, a cool glass of lemonade and their acidity heightens the taste of other flavours. They make a delicate, zesty garnish, too.

Although the first lemon mentioned in literature was in the early 10th century by an Arabic farmer, food historians believe it originated in Southeast Asia ““ China or India ““ beginning as a cross between the lime and the citron. After making its way into Europe, the Crusaders discovered lemons growing in Palestine, and they migrated to Haiti aboard Christopher Columbus' fleet. There is evidence that lemons were being grown in the Azores and shipped to England. During the Renaissance, fashionable ladies of this era used lemon juice to redden their lips. The Romans used lemons to keep moths away from eating their clothing, and according to Sunkist.com, lemons were so rare at on time, that kings used to give them to one another as gifts.

Somewhere along its travels, lemons became known for their ability to prevent scurvy (a potentially fatal disease caused by a lack of vitamin C), which commonly plagued sailors, pirates and soldiers ““ even miners in the California Gold Rush. They were in such high demand that miners supposedly paid top dollar for just one lemon. To keep up the demand, lemon trees were planted throughout California. In fact, 95 per cent of the lemons we use come from California and Arizona.

Do you give your fish a squeeze of lemon when it's served? It's been a tradition since the Middle Ages to serve one with fish, because they believed the juice would dissolve any bones if accidentally swallowed. In fact, lemons have many health benefits: the juice aids in digestion, helping the liver rid itself of impurities and can also aid in weight loss; its high concentration of vitamin C helps prevent infections; its antioxidant properties help eliminate free radicals, preventing diseases such as stroke, heart disease and cancers; it also lowers blood pressure and increases the HDL cholesterol levels (the good ones).

Compared to their citrusy cousins, lemons don't require as much heat to ripen. They're also able to bloom and ripe concurrently (both the blossoms and fruit are on the tree at the same time), perhaps another reason that makes them so pleasing to the eye. Trees planted in warmer areas will produce just about year-round, but commercial trees tend to go through three or four harvests in a season (about six months long). One lemon tree can produce between 500 to 600 pounds of lemons
each year.

There are generally three types of lemons available: Eureka, Lisbon and Meyer. The thick-skinned Eureka lemon has a short neck at the stem and lends a moderate amount of juice. It will contain some seeds. Both the Eureka and Lisbon share similar flavour, aroma and acidity. Lisbon lemons are more smooth and thinner-skinned and it doesn't have a definite neck at its stem, but the blossom end tapers into a slight point. Lisbons are generally seedless and have more juice then Eurekas.

Meyer lemons, which are somewhat less common, are known for being the sweetest, tasting somewhat like a tangerine. They are often used for adding flavour to fish, since they provide a much sweeter, more intense aroma and flavour.

Buying, Storage & Prep
Look for lemons that are firm and feel heavy for their size with finely grained skin that's bright yellow. Lemons that contain traces of green on their skin are still in the process of ripening and will tend to be more acidic.

Stored at room temperature, they'll keep for about a week. To keep them longer, wrap them in a paper tower and place them in a plastic bag. To keep them for up to three months at a time, place them in the refrigerator's fruit drawer, where it's darkest. To help extend the freshness of sliced fruit or a fruit salad, such as apples and pears, add a squeeze of fresh lemon juice to keep them from going brown.

To get the most juice out of a lemon, roll it between your hands to warm it up or microwave it for approximately 30 seconds. Lemon juice can be easily and quickly frozen; just pour the juice into an ice cube tray and put it in the freezer. After they're frozen, the individual cubes can be bagged for later use. If you find a lemon that's gone wrinkly before you've had a chance to use it, just put it in warm water for about 30 minutes and it will plump up.

Lemon zest is a great way to enhance foods, the peel can be candied and used for desserts or drinks and the juice is ideal for salad dressings instead of vinegar.