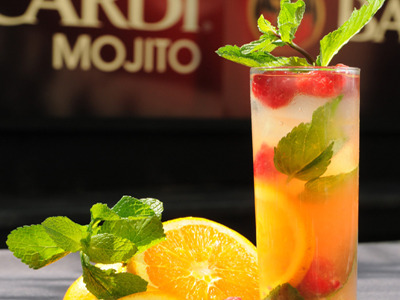 The two most well known mixed drinks containing mint have to be the Mint Julep and the Mojito. No southern belle ““ or Kentucky Derby ““ would be without this core cocktail and visits to Cuba must absolutely be accompanied by multiple mojitos.

The mint julep first appeared in print in 1803 and was described as a “dram of spirituous liquor that has mint in it, taken by Virginians in the morning.” As much as we might like to start our day this way, thankfully society swears by their morning coffee!

Some speculate that the mint julep was first created in the early 1700s somewhere along the east coast. Woodford Reserve Bourbon claims centuries ago an Arabic drink, julab, that became popular when introduced to the Mediterranean region. The original drink's rose petals were replaced by mint, indigenous to the Mediterranean.

The Kentucky Derby serves more than 80,000 juleps over its two-day event.

The mojito, one of Cuba's oldest cocktails, comes from the African word, mojo, meaning “to place a little spell.” Bacardi traces the mojito's roots back to 1586. Sir Francis Drake, a renowned English pirate tried unsuccessfully to invade Cuba for its gold. Failing that, Drake's pirate associate apparently made a mojito-esque cocktail called El Draque (how the Spaniards referred to Drake), concocted with aguardiente (a crude form of rum), sugar, lime and mint. In the mid-1800s, the recipe was reformulated and became hugely popular as the Bacardi Company was established.
Others claim Cuban slaves working in the sugar cane fields in the 19th century invented the drink.

Regardless of its origin, Ernest Hemmingway consumed many a mojito at Havana's La Bodeguita del Medio

Place the tangerine and the sugar in a cocktail sugar and muddle well. Rip mint leaves into the shaker and toss in the raspberries and rum. Top with ice and shake vigorously. Pour into a highball glass. Top with soda water. Garnish with mint and raspberries.