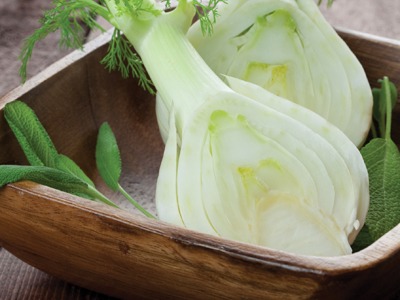 Fennel is very much a marathon vegetable, since it's edible as an herb and a green; its laundry list of health properties and health benefits keeps on going. In fact, the Greeks used to refer to it as “marathon.”

Fennel's mythological history is very intertwined. It's said to have been awarded to Pheidippides, an Athenian messenger who gave the news of the Persian invasion to Sparta in 490 BC. He supposedly covered 250 kilometres in two days on foot to notify the Spartans of the impending battle.Ancient Greeks named the herb marathon and believed it increased one's chances of longevity, strength and courage. History suggests that the herb was named as such to commemorate the battle at Marathon, which was fought in a field of fennel.

Greek mythology also says that knowledge was given to man by the gods at Olympus in a fennel stock filled with coal. The Greeks and Romans valued fennel even then for its medicinal and culinary advantages.

In Medieval times, fennel was placed in amulets and also hung above doorways on Midsummer's Eve to ward off witchcraft and evil spirits. Chinese and Hindu culture suggests the plant was once heavily used as a snakebite remedy and as a way to neutralize the poisons in some plants and vegetables. In more recent history, the Puritans called fennel seed the “meeting seed” because they chewed it during long church services to dispel hunger pains and also sweeten their breath. And, although fennel itself can't necessarily be attributed to giving absinthe the nickname “the green fairy,” it's used as one of the three main ingredients in this potent potable which began as a medicinal elixir in Switzerland, then became more widely consumed as a popular alcoholic drink in the late 19th century.

A member of the same family as parsley, carrots, dill and coriander, this pale green, licorice-tasting legume is native to southern Europe and the Mediterranean, India, and the United States are the main cultivators of this perennial herb.

Fennel leaves look very similar to dill; they are small, feathery and deep green. The plant can reach heights of four to 10 feet. It has a remarkable licorice flavour similar to anise, though these two herbs are very different. The seeds, flowers and dried leaves of the fennel plant can each be purchased and used in a variety of ways. Fresh fennel is usually available from fall through to early spring.

When purchasing, look for firm, fragrant fennel that has a nice white or pale green bulb without marks and healthy, green stalks that are tightly formed and relatively straight. Both the leaves and the stalks (which are sometimes sold individually) should be green and fresh looking.Be sure to avoid buying any that shows flowering buds, which indicates that it's past maturity.

Prior to storing, separate the stalks and bulb and place each in two different plastic bags and into the fridge's crisper. They should stay fresh for up to three or four days. Since the stalks don't keep as long, they should be used first. Fresh fennel will lose its flavor the longer it's stored. It can be frozen ““ thought it should be blanched first ““ it can lose much of its flavour this way. Dried fennel seeds should be kept in an airtight container and stored in a cool, dry location. They'll keep for up to six months. They may stay fresher longer when kept in the refrigerator.

To prepare fennel, whether it's to be cooked or eaten raw, first trim the stalks and discard any hard, tough outer portions. Also remove any little leaves from the stalks. Much like apples, raw fennel becomes discoloured quickly. To prevent browning, place fennel into a bowl of water and lemon juice and place in the fridge until needed.

The easiest way to slice fennel is vertically through the bulb. Whatever shape or form a recipe may call for, (chunks, diced, sliced or julienned), the easiest way to divvy it up is to remove the hard core, or heart of the bulb, before cutting the rest.

Raw fennel makes a nice accompaniment to salads, sandwiches or in lieu of lettuce on your hamburger. There's no limit to the ways fennel can be enjoyed: it can be grilled and served with fish (especially salmon or scallops), chicken or meat, sautéed with garlic and onions, in pasta sauce, or added to cabbage and apples for a unique coleslaw. The leaves are also ideal for use as a seasoning or garnish.

Fennel seeds add tremendous flavour to cheeses, breads, soups, and pastries. They can also be consumed on their own as a great way to freshen your breath.

Fennel is an excellent source of vitamins C and A as well as a great way to get your fill of dietary fiber, potassium, manganese, folate, and molybdenum. Plus, fennel is a good source of niacin as well as the minerals phosphorus, calcium, magnesium, iron, and copper.