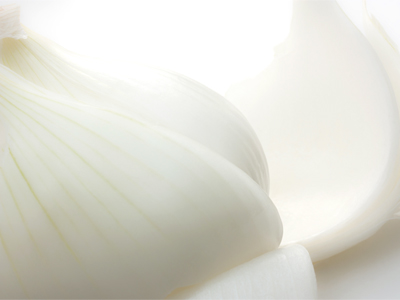 “It's probably illegal to make soups, stews and casseroles without plenty of onions.” – Maggie Waldron, American author and editor

Sometimes you might find yourself crying over the cutting board or sweating the small stuff (the onions, that is). Maybe you use them as adornment to your martinis, but one thing is for sure: this round, bulbous vegetable is a key ingredient for nearly everything to come out of the kitchen. Red, yellow, white or green, onions and varieties like leeks and chives add flavour and dimension to a dish.

Onion Origins
Although there is little archeological evidence of onions to determine their exact origin (5,000 years ago or more), many ideologies claim they came from central Asia, other research states they first began growing in Iran and West Pakistan.

Onions were a beneficial food source because they were easy to grow in various soils and climates; they were transportable and less perishable than other foods. Their water content helped prevent thirst and they could easily be dried and preserved. They have played the roll of foodstuff, art form, medicinal aid ““ and even for mummification.

About 5,000 years ago, onions bloomed in Chinese gardens. They were also mentioned in some of India's sacred Vedic texts. Egyptians reveled in the onion and the Sumerians were cultivating them in 2,500 B.C.

In Egypt, onions were a symbol of worship ““ it embodied eternity because of its layered growth and many an onion appeared on paintings in Egyptian pyramids and tombs. Egyptians revered onions like Transylvanians clung to garlic, with the exception that onions may have been used for their strong scent and magical powers to revive the dead rather than keep them away.

During the Middle Ages, Europeans were dining on three main vegetables: beans, cabbage and onions. Not only was it suitable for the rich and the poor, onions were supposed to cure headaches, snakebites and hair loss. It was also quite acceptable to give them as payment to the landlord and to the bride and groom as a wedding gift.

The Pilgrims made sure to stock the Mayflower with onions and also found wild varieties growing in North America. Colonists' diaries indicate onions were planted as soon as land was cleared in 1648.

White & Yellow Onions
If your recipe calls for chopped onions, the best options are either the white or yellow variety, regardless of their size; simply choose ones with a dry, papery skin and without any soft spots.

Red Onions
This rich, crimson-hued onion is covered in dark red, papery skin. Be sure to buy dry, firm bulbs without any soft spots or discolouration. This sweeter variety is great in a salad or a salsa.
Leeks
The long, flat green leaves and large, round white stalk gives leeks the appearance of a giant scallion, but they have a definite culinary calling compared to other varieties. Leeks are prized for their sweet, mild flavour and they can be cooked whole or chopped up or pureed for soups or added to salads and other dishes. Choose leeks that are pristine and unmarked, and crisp green stalks. Also remember, the smaller the leek, the more tender.

Shallots
The purplish flesh of a shallot has fine layers and less water content than its relatives. Shallots are definitely “de-rigueur” in French cooking and they're often called for in sauce reductions.

Pearl Onions
Aside from having one placed neatly in a Gibson, pearl onions are also delicious glazed or caramelized in many a robust cold weather meal. A pearl onion has simply been picked at an earlier stage of maturity. They can be red, white or yellowish in colour and they only have one single leaf, similar to a clove of garlic. The easiest way to peel this tedious, tiny bulb is to blanch it in boiling water. Trim both ends of the onion and place them in boiling water for 30 seconds, then transfer to ice water. Once cooled, use a paring knife to remove the skins.

Scallions & Green Onions
While these two varieties of onions differ from one another, they can be used alternately. A true scallion has no bulb at the end of its root, however both kinds have long, green leaves that slender and straight, with a white base. Unlike the larger, more pungent onions, scallions and green onions offer a light seasoning to dishes. The entire vegetable can be used ““ chopped or whole ““ from the white base right to the tip of the green leaves.

Chives
This dainty allium, is the smallest of the onions and considered more an herb rather than a vegetable. Because of their mild flavour, chives make an excellent garnish, chopped or as an addition to savoury spreads and cheeses. When heating chives, add them towards the end of cooking time so they'll retain their flavour.
RECIPE: French Onion Soup