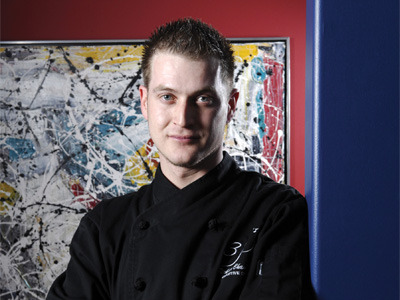 To be counted among the wait staff at Oakville restaurant 3S's, a vocal audition is in order. That's because the third “S” stands for song and this lyrical addition puts a musical spin on the gastronomic fare of the first two S's, which represent steak and seafood.

Each evening, every half hour a bell rings in the 266 Lakeshore Road restaurant signalling it's time to entertain diners with a tune. In turns, each of the waiters breaks out into song, either classical, jazz, opera or broadway, for just a minute or so, and then gets back to the job of attending to diners.

Trained singers are the prerequisite and the priority, says 3S's co-owner Will Tran.

“We're trying to fill the gap between the art community and the restaurant community,” says Tran, sitting on an elegant white leather-clad banquette in the elongated dining room.

“This is the first combination of its kind in Canada, and Oakville ““ with its strong arts community ““ seemed like a perfect place to start bridging that gap,” says Tran.

The auditions went well. The talent is nothing short of “phenomenal” and sure to be a welcome addition to the downtown music and dining scene, he adds.

Canadian talent dominates the casual atmosphere of this fine dining restaurant; from the wait staff to the kitchen crew where Executive Chef Richard Chambers performs his culinary magic to the fare that graces the plates.

While Chef Chambers says he is lacking in vocal talent he makes up for it with his culinary skill. Developed over 17 years working in the industry, Chambers' penchant lies with classical French cooking and an affinity for seafood.

“I have a passion for seafood because of the creativity that it allows,” he says.

Leading Maritime lobster and seafood broker Seacan is the company behind 3S's, thus guaranteeing that the second “˜S' in the restaurant's scenario is the freshest, high-quality seafood and lobster on the market from Canada's east and west coasts.

The wine list appeals to a bevy of palates and price points with vintages not typically seen on any LCBO shelf, says 3S's manager Laura Macdonald-Rumi. Some private wineries and one local brewery share space on the extensive list, she adds.

This focus on local is as evident on Chef Chambers' grocery list, as it is on promoting the arts and in supporting community good works. Variety is equally important, from the song repertoire to the wine, spirits and cocktail list to the seasonally-adapted menu.

With just six months under its belt, the 3S's bent for the arts is already stretching beyond its lovely deep blue painted walls out into the community working with the Oakville Galleries, Downtown Oakville Fashion Week and the August 6 to 8 Jazz Festival, as well as the charitable works of the women's service organization, the May Court Club of Oakville and affairs hosted by Appleby College.

“It's important for us to participate in community life,” adds Macdonald-Rumi.

An after-dinner lounge is in the works too, under the direction of the hip and energetic managers Kirk Brownell and Dave Smith. Live music and club tunes as well as a cocktail menu that is a creative companion to Chambers' menu in the dining room, is sure to entice a wide audience and become a popular gathering spot when it opens at the end of May.

The collective energy that runs rampant through the 3S's follows the same thinking of author Virginia Woolf whose quote is on the introductory page of the restaurant's menu. “One can't think well, love well, or sleep well if one has not dined well.”