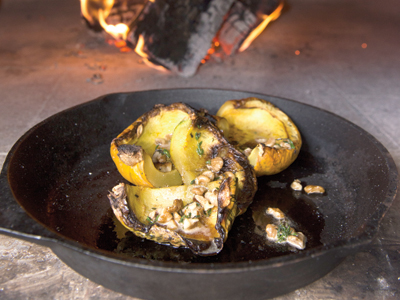 Dressed in crisp white chefs garb, Ryan Crawford rummages around the giant bin of potatoes in the cold cellar. The air immediately fills with the musky earthy aromas from the dirt they were dug from. Next to the bins of potatoes are onions, their ends drying or “curing” for long winter storage. “We leave the carrots in the ground; they sweeten with every frost”, says Crawford who looks and talks more like a farmer than a chef.

Ryan Crawford is chef and owner of Niagara-on-the-Lake's newest restaurant, Backhouse and he's showing off the produce from his three-acre garden. In a region overflowing with homegrown food, Crawford and other chefs like him found working with area farmers unpredictable. Not to be deterred, he decided to lease some land and put a young farmer on his payroll. Now Crawford knows the status of his produce at all times so he can plan his daily menus accordingly.

Crawford fills a pail of potatoes and brings them to the kitchen sink, in a restaurant kitchen noticeably absent of grills and ovens. Instead, all of the dishes are cooked on adjustable grills over an open fire in the dining room. He starts to stack the dried peach wood logs as high as 24-inches tall before lighting it. The fire needs to burn for hours before it's hot enough to grill the evenings dishes like the Dry-Aged Bar 5 Beef Striploin, the Free Foraging Chicken and the Wood Fired Leg of Lamb. While other chefs' demand controlled heat to perfectly cook their meats, Crawford is more of a naturalist taming the raw elements to inspire more of the foods inherent flavours.

While Crawford admits he wants to raise his own animals one day, for now he's quite happy with the lamb he sources from Southbrook Vineyards and Featherstone Winery. He likes the authentic Niagara flavours that come from the organic, vineyard-grazing animals.

Crawford represents the new generation of farm-to-table chefs preferring instead to use the term, “Cool Climate Cuisine.” His garden and efforts to source local produce is less about food grown around him and more about discovering what produce tastes best from Niagara's soils. Like grape growers determining what grapes make the best wine in Niagara's terroir, Crawford is doing the same thing with produce; cultivating flavours in search of the regions most delicious assets.

Crawford's not alone in his quest. He has surrounded himself with other like-minded, second-generation farm-to-table chefs such as Stephen Treadwell of Treadwells and Paul Harbor of Ravine Vineyard and he says, “we share information, sources and produce, we have a great help-thy-neighbour thing going on.”

When it comes to flavours that can claim Niagara heritage, Crawford talks of table grapes, stone fruit and lamb. Tender fruits like cherries, peaches, apricots and Sovereign Coronation seedless table grapes have a long and prosperous history in Niagara and Crawford pickles, preserves and processed all he can get to compliment cold-weather dishes. Where Niagara was once the chicken capital of Ontario, Crawford claims, “vineyard lamb is now the next generation of iconic foods.”

When he's not preserving a harvest or building fires Crawford is making cheese. “We went through 40-litres of milk from Sheldon Dairy.”  Crawford made (fresh) mozzarella, ricotta, Camembert, cheese curds and other fresh soft cheeses that he uses throughout his dishes. He likes Sheldon Dairy because they, like him, are about provenance, purity and natural processes. They lightly pasteurize their milk but don't homogenize it so the flavours are more prevalent. “We go through tons of cheese in a week and we have one of the largest selections of cheese (offered at a restaurant) in the world,” he boasts.

For the holiday season, Crawford will source his turkey from artisan growers with like-minded philosophies but he's most excited about the flock of 40-ducks living in the Featherstone vineyards. “I pickled 20-litres of sour cherries (this summer) and I think they'll go great with the duck,” he looses himself in another world and mumbles, “I might even spill some of Dillon's vodka in there too.” After a moment he's still pondering, “and incorporate some Grimo black walnuts.”

In a wine region that has come of age, Crawford believes he can do the same with Cool Climate Cuisine and if the popularity of Backhouse is any indication, he's well on his way.

– Lynn Ogryzlo is an international award-winning food writer and author and occasional contributor to West of the City Magazine. She can be reached for questions or comments at www.lynnogryzlo.ca.