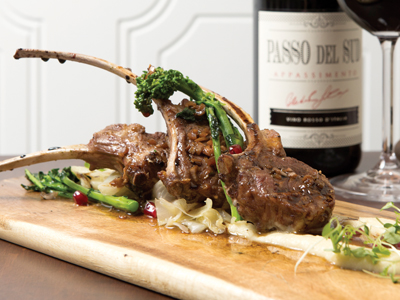 Borgo Antico Cucina Bar ““ Oakville's newest traditional Italian restaurant ““ they want you to feel like family, or at least feel like you're dining at a casual trendy bistro you might stumble upon during a visit to Sicily. Contemporary minimalism contrasts with both the chalkboard back wall and framed images, sent from family in Italy, clustered on surrounding white walls. The uncluttered interior design complements the simplicity of Borgo Antico's traditional Italian home cooking with a twist.

“We grew up with mom's cooking and family is important,” says Tino Bianchi, co-owner and operator of Borgo Antico. “We wanted to create a restaurant that reflects our values in a community-oriented city like Oakville.”

The team, who has worked with famous chefs and restaurateurs in Toronto (Bianchi still owns Nuit Social on Queen West), considered various locations, but kept coming back to downtown Oakville.

“In a neighbourhood restaurant ““ particularly in a community-oriented city ““ you get a lot of loyalty if you do it right,” Bianchi emphasizes. “In the first two months we were open in Oakville, we had some clients come back 10 or 15 times.

“The restaurant business is simple but complex,” he adds. “You need the whole package, which is only three components: environment, product and service. Offer a consistent product and good service and gain the trust of clients.”

And apparently, the support of people you grew up with.

To understand why Borgo Antico is all about reminding Italians of their roots and everyone else about the communal comforts of family dinners, you must first to meet the family ““ otherwise known as co-owners, operators and brothers Enzo Campisi and Aldo Campisi, along with cousin Tino Bianchi.

Bianchid, who moved to Canada with his parents when he was 12 years old, is clearly the polished manager, carefully articulating his vision for Borgo Antico. Cousin Enzo Campisi has front-of-house charisma and easily charms a willing listener with tales of leaving Italy for Germany when he was 18 and eventually making his way to Canada, specifically Toronto, to rejoin family ““ all the while learning as much as possible about the restaurant business, including knowledge of food and wines of the world.

“Walking into our restaurant should be like walking into a home,” says Campisi. “All the pieces should be there to make people remember their trip to villages in Italy ““ from the food, to the décor to the accents.”

“That accent is real,” Bianchi points out.

“The restaurant industry is in our blood,” Campisi continues. “We live and breathe the industry. We play soccer together and we are talking about the restaurant over the ball.”

True. The team has been talking about opening a restaurant together since all of them started in the industry in their late teens. Bianchi admits every relaxing evening out for a beer becomes a staff meeting.  “Partnerships with family aren't always easy,” he says. “But we all agree on the vision of what a restaurant should be.”

So, what is that vision? And most importantly, what's for dinner?

According to Bianchi, the menu at Borgo Antico is a collaboration between the three primary partners and Chef Sam Girgis, who Bianchi worked with before.

“Our recipes focus on the staples of Italian cuisine, with a twist,” says Bianchi, “but not break the bank prices.”

The regular menu, consisting of five sections ““ Antipasto, Pasta, Secondi, Tagliere Saume E Formaggi, and Dolce ““ will rotate dishes done well, Bianchi says. “We don't want to overwhelm the kitchen with a long list of pasta items, but we do want to experiment and keep it interesting, showcasing the talent in the kitchen. The Bucatini pasta, for instance, made of pancetta, black pepper, duck egg yolk and peccorino, is an amalgamation of two traditional dishes from two different regions of Italy.

A nightly feature might be an Italian favourite: Florentine Steak ““ a 36-ounce bone-in steak for two, or a white fish such as seabass.

Traditional, tried, tested and true might be the staples of the menu and bar at Borgo Antico Cucina Bar ““ which also offers classic cocktails done with homemade syrups and freshly squeezed juices ““ but that doesn't mean trends aren't an influence.

The restaurant provides clients with a “well-rounded craft beer experience,” according to Bianchi and different styles of gin (apparently the latest obsession) are high on the list of surprises, along with seven or eight by-the-glass red and white wines from around the world.

A worldly experience in a glass makes sense, considering one of Campisi's favourite things about first moving to Toronto was the diverse multicultural experience. “You can get anything you want in Canada,” he says, “including a cheese I grew up with from a small village in Italy.”

Borgo, in fact, means a small grouping of homes that's even smaller than a village, but the beginning of something much bigger.