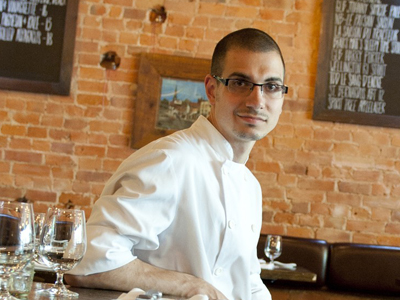 Just when we thought Oakville entrepreneurs George and Tammy Couto's incomparable success with restaurants could not be matched, along comes Bru. Snuggled amongst two of its counterparts in the historic Anderson block on Lakeshore Road East,  Bru has proven the latest triumph in the Couto dynasty.

Complimenting the eclectic group of three ““ Seasons, Corks, and Maluca ““ Bru brings its own unique character to the assemblage. Not quite a bar and not quite a restaurant, its identity is that of the new age gastropub. A British hybrid of sorts, Bru offers a casual-meets-refined atmosphere that welcomes first and foremost beer drinkers where food is also as important as the drink. Gastropubs are more than just bars with food ““ or  restaurants with good beer ““ they're the new wave of fine dining.

“People have limited resources, and when they go out, they want accessible, comfortable food. When Executive Chef Peter Gotterson and myself envisioned Bru, the idea was to keep it affordable by taking the familiar and executing it better than anyone else.”

Bru's ambiance is friendly and intimate with strategically placed tables and creative lighting. Candles are set aglow in open brick wall crevices, suggesting old age pub fused with trendy bistro. The window bar buzzes as do the diners, all in a comfy and sociable environment.

Enjoying a seven-year relationship with the pre-existing Couto-owned restaurants, Sous Chef Sawchuck proved inspirational alongside Chef Gotterson in achieving the vision of Bru over a year ago. A beer connoisseur himself,  Sawchuck found Bru was a great tool to dive further into the industry.

“It's nice to have something on both ends, a  passion for food and craft beer.”

Decidedly, Sawchuk says we are at a time now when Ontario breweries are exploding. “We are in a era where craft beer has become a popularity thing, so   we jumped on the bandwagon. Though it's been there for awhile, we are the first to get in touch with it in this neighbourhood.”

Offering 10 taps and a 33 bottle selection, when one keg runs out the draft selections are then rotated.

“We try not to get two brands from the same brewery at any given time,” explains Sawchuck. “Our objective is to have a different line-up every time someone comes in. Customer conscious, we offer gluten free beers and a cider for summer. And of course a fine selection of Ontario and imported wines.”

Though considered an outlet for a locally crafted product, the game plan for Bru was always to be first and foremost a restaurant with a focus on beer. As it is with Bru, the menu of a modern gastropub is far more expansive than a typical pub. Both original and affordable, Bru offers high quality trendy meals often served alongside traditional comfort foods with a twist  ““ such as their scrumptious gluten-free fish “˜n chips.

“Chef Gotterson and myself decided to keep the menu in a lower range than the other three restaurants in order to attract all customers. We include something for everyone by taking the familiar and executing it better than anyone else.”

Being of the Couto group, Bru's cuisine speaks for itself in the company it keeps. Chef Gotterson and Sous Chef Sawchuk are exemplary at their craft. Seafood such as zesty calamari, shrimp po boys with a zing and meaty crab cakes are delightfully fresh and seasoned to please. Falafel wraps are generous in servings, flavoured with tatziki, tabboualeh, hummus, pickled eggplant, feta and hot sauce. Entrees are hearty yet healthy with dishes such as organic chicken and gluten free anti-pasta pizza. A more traditional pub-like specialty is house-made sausage of the day served with potato salad, grilled onion and gravy. Dishes are pleasingly presented, served on boards and in cast iron skillets. A bar favourite is the $2 smoked and seasoned peanuts contained in a stainless steel cup.

Indicative of an old world pub meeting New York chic, Bru was created to please everyone. “Casual is the whole idea,” says Sawchuk. “Bru is suppose to be free form, homey and fun.”

Now one of four amazing restaurants, each is as unique in their own individuality as they are similar under the charmed Couto umbrella. When asked of George Couto, “˜will there be a fifth?'