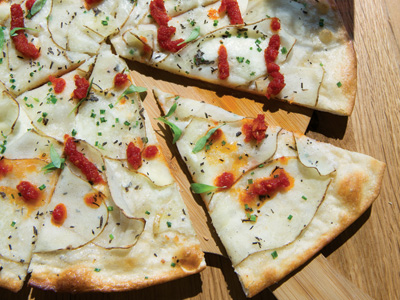 “Come for the beer, come back for the food,” Jerod McCrory, 26-year-old owner of Culaccino Bar & Kitchen, says about his new restaurant on Brant Street in Burlington.

Culaccino carries about 60 varieties of beer ““ on tap, canned and bottled ““ from craft breweries only. Most products are visible in the floor-to-ceiling bar shelving that makes up half of this circular restaurant, a former bank.

Like the menu, beer offerings change seasonally based on what local growers are producing. For example, fall is about squash and pumpkin. Both locally grown vegetables will become sides on regular menu items such as Rib Eye Steak, but craft beer selections with notes of pumpkin will also appear behind the bar.

Most of Culaccino's beer list is locally sourced, from craft breweries in the Niagara Region such as Silversmith, and Toronto such as Amsterdam Brewery, and even closer to home, from Hamilton's Collective Arts.

This is good news for Culaccino, an Italian Gastro Pub intending on capitalizing on “Italian sensibilities” and the approach to communal dining and sharing.

“A long wine list is good,” says Jerod, “but rarely do people have more than one type of wine with dinner. With beer, you can try a variety, share them, taste different flavour profiles, and start a conversation. It's a different experience.”

Fresh out of business school at Western Ontario, Jerod opened his dream restaurant, one that melded the social environment of gastro pubs he'd visited with his parents in New York and Philadelphia with the cultural inspiration he'd absorbed travelling through Italy. Thus an Italian Gastro Pub in Burlington was born.

“The restaurant was actually a business school project,” Mark says. “In a second-year class, students are to develop a concept, create a business plan and take it to a bank to negotiate funding.” Jerod's project evolved into Culaccino.
Despite his age, Jerod comes by his claim of travelling extensively honestly. According to Dad, Mark's work in the corporate beer world took his family of five travelling and dining all over the world.

“My children never ate from a kid's menu,” he says. “We always tried different dishes and shared them among us. Jerod learned to critique food at a young age.” He also learned to love the “˜family style' dining associated with Italian gatherings.

Two components of the Italian inspiration behind Culaccino are closely related: the experience and the sharing.
For instance, a 750 mL of Italian Bruton arrives at the table like a bottle of wine flanked by two Teku glasses, specially designed for tasting a light sparkling slightly orange-flavour infused beer like the Bianca. It's a new experience for most, and the bottle is intended to be shared”¦ and talked about.

So are most of the menu items at Culaccino.

Mussels steamed with beer are understandably popular. “Not all menu items contain beer,” Chef Mamodeiro says, “but all are designed to pair well with a specific type of beer.”

Boards are entree-sized sharing platters. The most popular is Fried Chicken marinated in buttermilk (no, not beer) and of course regular menu versions of pasta and pizza and daily specials, sometimes created accidently ““ such as the breakfast pizza.

Keeping the products visible and in front of the customer is an important part of Culaccino's unique circular design that also has a small lounge and chef's tasting room (the former bank vault) available for private functions of up to 16 people.

Many customers, particularly younger, try something new based on the colour and design of the bottle ““ something they can then take a picture of and share on social media, Jerod says. Price doesn't seem to be a factor, though sometimes a photo-friendly cartoon robot on the label does. Spirited regional craft breweries are happily obliging.