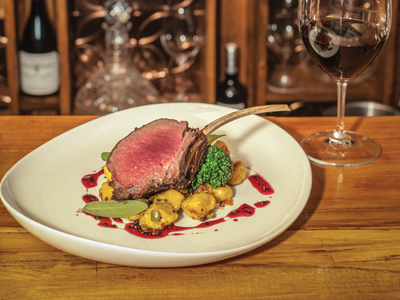 Regionally produced lamb, duck, rabbit and game birds like pheasant are some of the fall “harvest” Enver's of Morriston Executive Chef Ken Hodgins has to choose from when he heads out to source innovative ingredients for his winter menu. “People who are passionate about what they do give you the best product,” he says, referring to the farmers and grassroots growers around the small town of Morriston.

Passion is what this 31-year-old restaurant is all about. Hodgins is left to pursue his bliss, creating menu items designed with foodies in mind. “I have the freedom to do whatever I want,” he says. “I want to make the restaurant a reflection of how I cook.” And to some extent, how he lives. Hodgins becomes emotional talking about environmentally damaging fish farming. The most popular dish on the menu ““ the daily fresh fish special ““ is sourced from a west coast sustainable line-fishing supplier, who moves the scaly creatures from water to table in three days. It normally takes a week, according to Hodgins, who also smokes meats and stuffs sausages in the kitchen.

“I trust him completely,” says owner Terri Manolis. “If he's not happy with a dish, or it's not selling, he'll take if off the menu before I do. A hands-off approach keeps things exciting for the guys in the kitchen.” Her passion is gardening (all heirloom tomatoes used in the restaurant grow in the raised beds behind the building) and sourcing selections for Enver's extensive wine list. “A lot of research goes into designing the wine list,” she states, flipping through the six-pages and admitting not everything in the cellar is listed here. “Finding something unique that fits the restaurant's profile, something out of the ordinary, is exciting for me.” There are wines from Niagara, of course, but also from all over the world including a bottle of Hochar  red she sourced from Chí¢teau Musar, a “wonderful” winery in Lebanon.

The 72-seat restaurant (42 upstairs and 35 downstairs, perfect for private functions), was renovated a bit when Manolis bought it from the namesake owner 13 years ago, altering the name only slightly by adding the “of Morriston” to indicate a change, a change that's about a love of sustainable fresh food, and a wine list that exceeds most restaurants three times its size. Enver's is open Tuesday to Friday for lunch, and Tuesday to Saturday for dinner.

Before becoming Enver's second owner in a three-decade history, Manolis worked at a research lab while her then-husband ran the Aberfoyle Mill down the highway. But like many entrepreneurs, a career change beaconed. “How I found this place was ironic,” she says. “A friend of mine was Enver's first cousin and she talked about the place all the time. I ate here a lot too.” Then it came up for sale in 1998, and after bringing a number of people to the restaurant to entice them to buy it, Manolis bought it herself and reopened in May of 2000.

Good timing struck again when, 13 years ago, Manolis ran into her now head chef, Hodgins, picking up one of his last pay checks from the Aberfoyle Mill where he worked for years. He told her he wasn't enjoying his new job. She hadn't closed the deal at Enver's yet, but banked that information. Once Enver's was hers, she immediately called Hodgins and he's been head of the kitchen ever since, essentially living a chef's dream: full creative control of each seasonal menu, choice of regional suppliers, his own smoker for creating bacon (which customer's can buy by the pound), the freedom to source interesting foods and even forage for mushrooms and wild leeks, and an on-site herb garden.

The backyard garden, along with two decks, is quietly located behind the quaint street-front location in a charming village interrupted by the buzz of Highway 6, a major connection between the QEW to the south, and the 401 slightly, very slightly, north. While there are traffic calming measures currently in place in Morriston, “to make this the village it's supposed to be,” says Manolis, and plans to extend the #6 bypass around town, the major highway outside their door is a mixed blessing. It does serve as an easy meeting point for many customers. Regulars travel north from Hamilton and Burlington, east from Milton and Toronto, west from Kitchener and Cambridge, but strangely few from Guelph.

For some reason, the northern neighbours consider Morriston out of the way, yet clients from the GTA and GHA view the convergence of the 401 and Highway 6 an accessible social hub. “We really are a word-of-mouth restaurant,” Manolis says. So try it, tell your friends, and gather in Morriston. Just drive slowly when you get there, or you'll miss it.