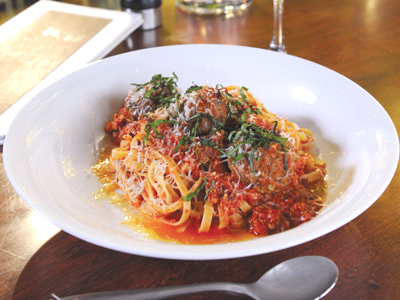 The Ivy Bar & Kitchen embraces dualities with the understated grace of a superhero: by day and early evening it's a chic New York-style fine dining establishment where clients are wined and dined and special occasions are celebrated over plates of lamb, Jail Island salmon or dry aged Kobe beef. But by night, the tables in front of the bar roll away, and the spectacular circular crystal chandelier becomes a cascade of hip radiant colour getting the dance party started (especially for those over 35 on Saturday). Then there's the patio on a summer afternoon.

After two years of renovations, the grandeur of this place is visually compelling ““ not for its opulence, but the opposite: a blend of modern minimalism and country club posh. Picture a cement floor, exposed industrial ceiling accented by plush comforts of glittering light fixtures and gray velvet seats. The place is warmed up ““ and almost humidified ““ by a two-story “living wall” behind the bar with foliage meandering to the ceiling. And that's only the inside.

Adding capacity to this almost 400-seat restaurant located along Burlington's South Service Road is a teak and cedar outdoor patio. It's a courtyard, really, that offers patrons a resort-like escape from the nine to five hustle (and highway headaches) a stone's throw from the front door. The patio includes two outdoor bars, plenty of bar-height chairs, an extensive cocktail menu and an impressive list of creative adult fun food that focuses on light, healthy, organic, locally sourced (when possible), and quality raw materials.

Executive Chef Mark Nethercot joined Ivy a few months after it opened last spring and is enthusiastic about rolling out summer fare, clearly stamped with his influence. “We put a contemporary twist on fine dining,” he says.

“The plan is to set the curve, not follow the curve.”

So where does this curve begin?

With beef, apparently. Specifically, dry aged meat is used for everything at Ivy from steaks to burgers. It's a complicated process, Nethercot says, and one done at Beachwood Cattle company in Simcoe. Nethercot's been using the organic beef producer for his young family's meals for years, and convinced the producer to supply the restaurant as well.

“Dry aging takes longer than wet aging,” Nethercot says, but the results are worth it. “The meat is wrapped in cheese cloth and the blood and moisture is whisked out for up to 60 days. Enzymes in the meat break down connective tissue and make it tender and tastier.” It's almost like putting it in a humidor for meat; it must be stored at a specific temperature (almost 0 degrees) and a specific humidity because you don't want anything to turn.

“We have the ability to do quality food at a price point others, especially chain restaurants, can't,” he says, “because our Friday and Saturday dinner clientele is willing to pay for lamb, steak and seafood, such as béarnaise sea bass.” As he speaks about the summer menu Nethercot discusses demands for fresher lighter fare, organic food and sustainably caught seafood that meets Oceanwise standards, as well as vegetarian and vegan options.

These are clearly concerns for him as a chef, but not at the expense of business acumen. A graduate of George Brown Culinary School and Mohawk College's business program, and a former food technician at a major restaurant chain, Nethercot understands the fine balance between preparing the food that challenges a chef's creativity and the demands of business success.

Special events are an Ivy focus, such as weekend brunch with an omelette bar and carving station, wine tastings, the Friday 5 to 9 cocktail party with mussels, and special prix fixe menus for large groups.

“We've become a destination for large parties,” Nethercot says. “Tonight, for instance, we have reservations for parties of 8, 10, 35 and 18.”

So gather your friends and ditch the cookie cutter franchises. The summer menu at Ivy Bar & Kitchen features updated pub food for grown-ups and a big apple mentality that doesn't sacrifice fun for upscale value. A night out with good friends deserves equally good, fresh and light noshes such as white cheddar, avocado, snow crab, tomato and smoked bacon grilled cheese, or the Ivy take on classic fish and chips: tempera battered wild cod with fries in a glass. Add a cocktail, and any night at Ivy becomes a special event.