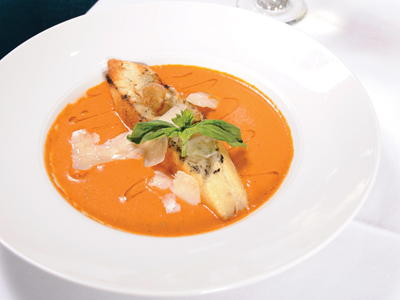 Cory Cherry is on a rare break from the kitchen, just before the dinner crowd starts filing into J.A.C's Bistro in Oakville. The 20-year chef and restaurant owner, visible in the open concept kitchen to all who dine here, has the house 24-hour tomato soup on a slow cook. It's part of what he calls a “labour-intensive” menu at the recently opened Italian- and French-influenced restaurant, one that specializes in earthy and slow-cooked dishes.

“We make the soup over the course of two days,” Cherry explains. Every morning they select the day's best tomatoes. They're roasted to the point that they darken and turn into a rich sauce that concentrates and produces a pungent and sweet taste, flavour that takes a full 24 hours to emerge. It didn't take long for the tomato soup to become a favourite to the regulars that started turning up at J.A.C's since it opened November 8.
Says Cherry, “The community has really embraced us.”

Earlier in the day, Cherry, who represents the C (Cory) in J.A.C's, was paid a visit by his wife Jane (J) and baby daughter, Addison (A). The story behind the name (“everyone always asks,” Cory says) is answered as soon as you step through the front doors, where you're greeted by three stick figures holding hands. Jane is the female figure on the left, Addison the baby stick figure in the middle, and Cory the chef figure on the right. This family restaurant, one quickly learns, is owned and operated by the Cherry family, though Jane is currently in what Cory calls a “supporting role” since she's on maternity leave with Addison.

J.A.C's Bistro is the brainchild of Jane and Cory, who met in Oakville's restaurant landscape eight years ago and dreamed of having a place of their own, where patrons could have great food and atmosphere. The partnership was perfect: Jane the restaurant manager, Cory, the chef. They were married in 2006 and in June of 2011, welcomed Addison to the family. They found the perfect spot shortly after that. “We always wanted to do something like this, and the opportunity came up and we thought it was the perfect place,” says Cherry. The patio was a big draw, he adds, as was the comfortable feel of the place. “The actual definition of bistro is an inexpensive, non-pretentious atmosphere,” Cherry says. “That's exactly what we are.” The average price of an entrée runs about $20, with the higher end items like the ten-ounce steak going for $26.

The soup takes the longest to cook, but J.A.C's features quite a few other dishes Cherry calls “labours of love.” The risotto is cooked for an hour on the stove, made fresh every day and mixed with butter, sauce and wild mushrooms to order. J.A.C's makes its own sausage in-house, and pizza dough from scratch for its daily pizza feature. For dinner there are three different features every night; one recent example: roasted beef tenderloin with roasted mashed potatoes and gorgonzola cream; spiced marlin fettuccini with pesto cream, and house-made gnocchi served with seared scallop.

The menu boasts a full complement of pastas and fish too with the lobster and shrimp seafood linguini among the best sellers. J.A.C's also boasts a large wine selection and private reserve wine list, as well as selections of grappa, cognac, scotch and a variety of beer on tap.

Every Sunday, J.A.C's plays host to Family Day. For $60 a family of four gets a meal that includes two glasses of wine, a platter of salads and choice of pasta for the main dish. The price is adjusted accordingly for families of more than four. “It's a way for an entire family to have an affordable night out,” says Cherry. Minutes later, the veteran chef takes his place back in the kitchen, just in time for the dinnertime crowd. The signature tomato soup is still on a slow simmer.
RECIPE: Crí¨me Brí»lée TartRECIPE: Roasted Tomato Soup
– 379 Kerr Street, Oakville; 905.582.2664