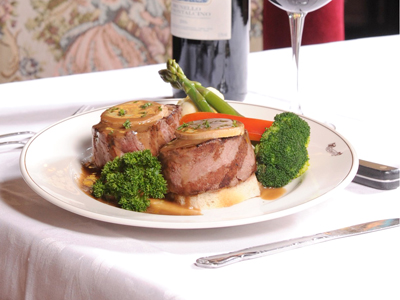 La Castile Manor is as much a feast for your eyes as it is for your taste-buds. The architecture of the 44-year-old landmark in Mississauga is traffic stopping. The interior adornments, including stained glass windows, and huge crossbeam ceilings, are jaw dropping. And the menu will certainly drive your desire to plant your feet under one of the impeccably laid out tables, in the dining rooms of the three-level Medieval-style manor.

This is the castle the Traiforos family built, where creating an elegant ambiance is as important as offering exceptional service and excellent food.

Ted, his wife Sandra and daughters Stacey and Helen, are the indefatigable foursome at the heart and soul of the restaurant. La Castile, which references a former kingdom, pays homage to the steak and seafood scene of the 70s, when tradition and opulence reigned.

“It was a time when service in fine dining was paramount and this is part of what has made La Castile an unforgettable experience all these years,” says Helen.

That it is, for so many reasons. Flaming pots, enormous chandeliers, massive wood railings and flowing stairways that lead to all dining levels collectively contribute to the palatial atmosphere. Little nooks and crannies throughout the multi-level manor are ideal for a private, intimate gathering and larger spaces accommodate a crowd of up to 100 in an equally beautiful atmosphere. Rest assured that as much attention to detail is given to a small group of 10 as it is for 100.

In the Piano Lounge stately plush red velvet, dim lighting and private alcoves create a tranquil ambiance to enjoy a high-end or comfort-food meal; from a deluxe cheeseburger to melt-in-your-mouth filet mignon to steak salad, or barbecued back ribs.

Never ones to rest on their well-earned laurels, the Traiforos' have recently added an outdoor patio to their stately empire and the result is an equally breathtaking atmosphere. Surrounded by impeccably manicured gardens it is an oasis for the al-fresco loving set.

If appetizers and an aperitif are the order of the day sit back in the lounge, patio or dining area and enjoy the world's finest champagnes, whiskeys, wines, vodkas, liqueurs and specialty cocktails, as well as live entertainment from Wednesday to Saturday nights.

As the executive chef of La Castile, Ted creates cuisine that is fit for a king, queen and court putting his culinary talents to the test daily with exquisitely executed dinner and lunch specials.

The La Castile legend began with a dream. Ted immigrated to Canada from his home in Greece and set to work on carving out a career in the culinary arts. He built up valuable experience from myriad sources across Canada and the United States. He has appeased the gastronomic fancies of passengers travelling on CN Rail trains, as well as the glitterati of New York City.

Ted's prowess in the restaurant industry was quickly evident. He had the Midas touch for turning mediocre restaurants into dining destinations. With such a successful track record, Ted put his knack to work for himself.

The result has remained a gem of the GTA for more than four decades and shows no signs of waning.

Reservations are recommended and a dress code is in effect.