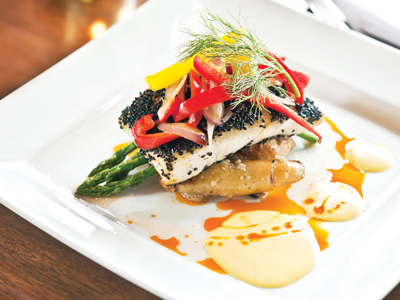 Small town Lowville, 15 minutes north of Burlington, casts a strange summer spell on people ““ sometimes the first (or fifth) time they drive through, usually on their way to somewhere else, they stop for a visit. But for others, like Lowville Bistro's owner Judie Starchuk, the enchantment is irresistible. She stayed.

Five-and-a-half years ago, Starchuk, a retired human resources executive, walked into the Lowville Bistro in that namesake pictorial town and knew this was the place she had to own. It was Saturday, and by Wednesday she made an offer. Starchuk grew up watching her dad run a neighbourhood pub, but deviated from that industry for several decades turning her attention instead to managing people and staffing issues in the corporate world.

That is until she turned 50. Then the large communications company she worked for gave her the “golden hand-shake” leaving her free to explore a new career in food service, and to some degree the entertainment business, as sole proprietor of Lowville Bistro. Leaving the big city chaos and a large house, Starchuk bought the Lowville property and downsized her life to a loft above the 30-seat restaurant in the historic c.1853 building that once housed the community's general store, accommodating horse-drawn carriages at the front door.

Now, of course, there's parking out front and horses are relegated to the many pleasure riding farms nearby the bistro's property. Guelph Line cuts a sharp turn out front, forcing drivers to slow down through the affluent hamlet. Golf courses are numerous nearby and the Lowville Park with nature trails balances the trinity of postcard perfect pastoral scenes. This is a destination restaurant for those coming north from Burlington or Oakville, or south from Guelph and Kitchener.

It's the kind of place friends meet over plates of Crispy Dry Ribs in the dining room, reconnect over cocktails on the teak patio, or decompress listening to live jazz on Sundays. It's also the place locals have claimed as their own, with many area couples eating here at least once a week. “It's not uncommon,” Starchuk says, “for one member of the family to come here for lunch with friends and then come back with other family members the same day for dinner.”

That's why the much-loved menu of grilled paninis, pizza, and interesting Nasi Goreng (fried curried rice with fruits) or Melensane (breaded eggplant, bocconcini cheese and basil sauce) stay on the regular menu, and wonderful nightly features include meat, fish, pasta, risotto, salad and soup and game, in season. Both the regular customers who have tried everything on the menu, she says, and those who make the drive here for the first time will always find something to delight the senses.

Another indispensible feature of the bistro is general manager Robert Small, who brings gracious warmth ““ and four decades of hospitality experience ““ to Lowville Bistro. He's also Starchuk's brother-in-law, and was working in Mississauga when she bought the restaurant. He had a similar instantaneous reaction to the aura of the property and town.

“I was attracted to the opportunity,” he says. “I loved the area, and wanted to take the place up a notch, bring our own flavour and thoughts to it while retaining the bistro-style and home cooking quality.”

Small's calm nature is a good balance to Starchuk's gregarious straight shooting personality. She's quick to add that it has taken the whole team of staff to raise the bar on presentation, but “art on a plate” does not suit Lowville.

“We seem to balance the customer's expectation for service, quality and presentation with good value and portion size. No one leaves here hungry,” she says. As for reduced calorie concern, “I don't see it as much here,” she says, “especially when it comes to desserts. We have rich decadent desserts from a supplier in Toronto called Baker Street Bakery and I have no problem selling them.”

One of their customer favourites is a chocolate banana cake and unsatisfying portions are not a problem here. Also not a problem, is filling seats either during Saturday or Sunday brunch, which includes, according to Starchuk, an Eggs Benedict dish that regularly receives customer compliments, or Sunday jazz night featuring a four-week rotating list of artists such as Melissa Boyce, Diane Lee Clemons and Jorge Lasso. The music, like everything they do at Lowville Bistro Starchuk says, is suitable to the customer base.

“It's a mix of contemporary jazz, not classical, and easy listening.” The tradition started here before Starchuk and Small revamped the restaurant, but like everything, the team took it up a notch expanding the repertoire and offering an ideal way to wind down a summer weekend, relaxing in a town with no fast-food outlets or pizza delivery service. It's almost like going to the cottage, without all the effort.