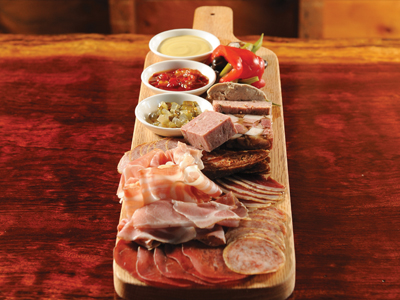 Entering Maluca, the first thing I notice is the rich, warm wood tones. They envelope the room in warmth
and the light plays off of the gleaming, polished surfaces bringing them even further to life.

Maluca is the third of a trio of Oakville eateries owned by George and Tammy Couto. All three have their own very different identity, and menus to match.

Seasons is an Oakville fine dining staple, housed in the historic Anderson Block on Lakeshore Road. Corks was the second in the string to open, boasting a busy dining room featuring a tapas menu. Maluca is just a couple of months old, and located a mere few steps along Lakeshore Road from sister restaurant Seasons.

Executive Chef Peter Gotterson says that he was going for a more casual menu at Maluca, than at neighbouring Seasons.

“We wanted something a little more casual. Some influences of pub food, but with a bit more sophis- tication. Much of the menu has a French influence, but the dishes are very accessible,” he says.

The menu has numerous items to choose from, the majority of which are small plates along with a handful of larger entree size dishes. Items include croquettes, salads, oysters, flatbread, ribs and the cheese and charcuterie platters, of which Chef Gotterson is particularly proud.

“I am really pleased with the charcuterie. We are making everything in house, with the exception of proscuitto. The salami, the terrines; everything is being really well received.”

The Charcuterie Board is prepared to match the size of your party, with small and large options ranging from $15 to $25. Among the cured and smoked meats are a rich pate and the Pork and Brandy Terrine. The board is completed by a selec- tion of house-made pickles and preserves.

Alongside the Chef's specialty ““ and beauti- fully prepared ““ Charcuterie Board, my table also enjoyed the Cheese Board. A selection of expertly selected French cheeses is served up alongside figs and house-made chutneys, and lovely baguette crisps. This can also be prepared to serve one ($6) or up to a party of five ($25).

My table enjoyed an evening tucked into one of three cushy leather booths that are set away from the entrance and bustle of the bar. The front sec- tion of Maluca, however, makes for a wonderful spot to sit and watch the neighbourhood go by. A row of high tables with curvaceous wooden stools flanks the window overlooking Lakeshore Road. The window is tinted though, so you can see out, but passersby can't see in.

The focal point of the bar is a long, rectangular wine storage vessel. Filled with ice and bottles of wine, drinks are served to patrons from three sides of the bar surrounding it. At the back of the restau- rant overlooking the open kitchen, is more typical bistro-style seating ““ but with a great vantage to observe the action in the kitchen.

“In terms of the look of the restaurant, George wanted something completely different. He want- ed a vibe and atmosphere that you can't find any- where else in town,” says Gotterson.

Couto has succeeded with every surface, includ- ing the walls, finished with materials that are unique and interesting, and above all, warm and textured. The atmosphere is relaxed and casual, but in a very urban and interesting way.

The eclectic ambiance is matched by the menu, with a range of options to keep most diners happy. The smaller sized portions are perfect for ordering several, and sharing among the table. French-inspired classics like French Onion Soup and Hand-Cut Frites are listed alongside House Smoked Pastrami Sliders, served with pickled beets and Roasted Tomato and Brie Tart, served with garlic confit. But, if someone is in the mood for a larger entree, classics like Steak Frites, the Maluca Street Burger (an 8oz prime beef patty with house smoked bacon and cave-aged Gruyere) and Beef Short Rib Bourguignon round of the menu.

The Romaine Salad is made far above average by the addition of sumptuously salty house-smoked bacon. Lovely, square chunks are scattered along with Roquefort cheese and walnut-infused crou- tons before being drizzled in Maple Pommery Vinaigrette. The Potato and Truffle Croquettes are light, fluffy and golden and made extra special by the addition of truffles. And among the entrees, the perfectly seared scallops served over green pea grits with buerre noisette was sadly unfinished, but only because each small plate was more deli- cious than the last.
RECIPE: Roasted Tomato & Brie Tart RECIPE: Charcuterie Board
-Maluca, 142 Lakeshore Road East, Oakville; 905.842.6111