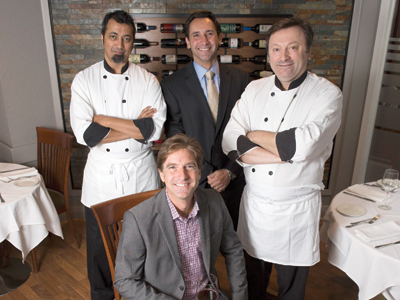 “We are like a band introducing a new musician,” Executive Chef Joe Rago of Michael's Back Door Restaurant says about recently hired Sous Chef Mark D'Souza. “We look forward to combining his style and fresh ideas into our collaborative effort.”

Of course, this isn't any band. For D'Souza, it's a bit like being the new guitarist for The Rolling Stones.

Michael's Back Door on Lakeshore Road in Clarkson Village is an institution. No question.  After 35 years in business and still going strong, this restaurant has earned that designation. In an industry where about half of new start-ups fail in the first year, this place has retired people including former Executive Chef Stephan Waespi, replaced in the kitchen by new Executive Chef Joe Rago.

Well, not that new. Rago worked and waited 27 years for the title, helping guide this upscale traditional Italian restaurant through ““ or perhaps around ““  three decades of culinary trends embraced (or not) by increasingly educated foodies who've crossed the threshold of Michael's Back Door.

Now it's his turn to invite a new sous chef on to the team and take this Mississauga dining icon in a slightly updated direction.

D'Souza, originally from Saskatchewan, initially appears a fish out of water amongst a clearly Italian crew; he's mild mannered, laid back and cautious his first week on the job. Yet most of his 15 years cooking has been in Italian kitchens around the GTA ““ it's an environment he knows well.

“I've always loved cooking,” he says. “It's intense and passionate, sometimes even stressful. You're always learning and it's never the same. Plus, you work with some eccentric people.”

So maybe he is ready for the challenge this team is embracing. Armed with a new head chef and a new member of staff in the kitchen, and even a new front of house manager, Michael's Back Door must balance established reputation with an eye to the future.

Being ahead of the trend is what's essential, according to Michael A. Morra, the second-generation of Morras at the helm of Michael's. And knowing what your customers want is the most important. “What's popular in a big city, even Toronto,” he says, “might take longer to get here or might not work at all.” For instance, “People don't necessarily ask for organic or locally sourced produce,” Morra says. “But they expect to see it.” That will be one of the menu changes here.

“We will also introduce some new dishes, new ideas and improve upon the overall experience to attract new customers and a younger crowd,” Chef Rago adds. “To do this we'll focus on rustic and regional Italian dishes and add a modern twist.”

What's old is essentially new again in Rago's world, or at least he's making it that way. The focus of Michael's Back Door will always be traditional Italian food ““ simple and fresh flavours. He's digging deep into his personal history, drawing from the region of Italy he's from and where he started his culinary training. He's enjoying introducing the next generation of diners to what he calls, “peasant food now elevated to gourmet status.”

This includes Fava Beans and Dandelion Leaves in Olive Oil, Pasta Fagioli (Tuscan three-bean soup), Pasta with Swiss chard, and even tripe. “What they ate in villages and used to throw out in North America, people here are getting to know.” Rago says. “It's new food to a younger clientele.”

Local clientele primarily from Mississauga, Oakville and Burlington is the restaurant's focus, and bread and butter.

However, to add an edge of the unexpected to this 145-seat establishment known for tradition and reliability, a special “˜menu extension' of seasonal dishes will expand what customers have come to expect. A soup, appetizer, pasta, meat or fish entre list will update weekly and include fresh surprises such as exotic meat. The nightly specials are where D'Souza might have the most influence, adding modern touches to both flavour blends and presentation while still rocking the classics.