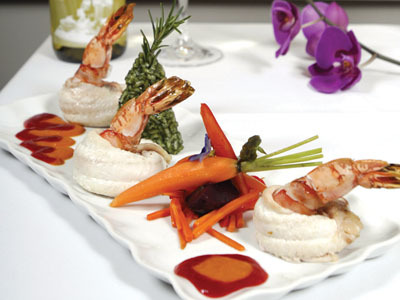 It is an impressive feat when a restaurant can thrive for three decades in the same location. It is all the more impressive when you discover its staff has barely changed over the course of those 30 years. That's the story behind Michael's Back Door, the Italian restaurant in Mississauga's Clarkson Village set to celebrate its 30th anniversary in October.

Principle owner Michael Morra and partner and Executive Chef Stephan Waespi have been working together more than 22 years, serving up an Italian continental menu that is heavy on veal and beef dishes, in addition to daily specials and a host of other options. “It's the fact that Michael and Stephan have been consistently here over the years, and we've been very consistent with our brand and with our product,” says Della Savia.

The restaurant, so named because a door on the back of the building serves as its main entrance, will celebrate its 30-year milestone throughout the month of October with a three-course special for $30, in addition to daily prizes and giveaways. It's one way for Michael's Back Door to say thank-you to its loyal customers.

Among the customer favourites on the menu are the steak, veal with lemon, Dover sole, rack of lamb and angel hair pasta with lobster. For the first-time visitor, Della Savia recommends an appetizer of shrimp and scallops, a tomato and bocconcini salad, the rack of lamb, and for dessert, homemade ice cream with berries and caramel sauce. “Finish it off with an espresso and a nice 20-year-old port,” he adds.

The man behind the magic in the kitchen is Swiss-born and Swiss-trained Waespi, who worked in Europe before bringing his skills to Canada. Sous-chef Joseph Rago has been with the company for 20 years, while Morra's son Michael Morra Jr. is another long-time partner with the restaurant. It's Morra Jr. who is in charge of the extensive wine list.

“We are extremely accommodating with our wines, as well as the food,” Della Savia says. “If there's something they can't find on the menu and would like to have, we're more than happy to accommodate them. Whoever is in the kitchen will accommodate your needs.”

Michael's Back Door has built a reputation that has attracted a range of celebrities over the years, including actor Woody Harrelson, singer Tony Bennett, golfer Payne Stewart, Hockey Night in Canada host Don Cherry, Mississauga Mayor Hazel McCallion ““ a frequent visitor ““ and even the Stanley Cup. “We've been very, very fortunate to have a lot of great people grace our restaurant,” Della Savia says.

Upon walking through the (back) door, patrons will be greeted by a solarium, hard wood floors and a main dining room that features tables with white tablecloths and candles. Across the hall is a wine room that seats up to 14 people, and upstairs the restaurant features the piano room, which accommodates up to 40 people for special events.

Michael's Back Door plays host to company functions, various charitable causes, birthdays, anniversaries and work meetings. The restaurant is also heavily involved in charity work, with an annual golf tournament that has raised more than $300,000 for a variety of causes, including local cancer hospice, Ian Anderson House.

“We are extremely community driven,” Della Savia explains. “It's our way of giving back, because we're very fortunate to be in such a great community.”