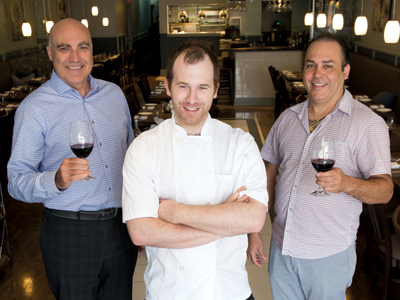 JohnRoss Woodland might be a chef you've heard of, read about or watched on television. Now, you can meet the man ““ if you can coax him out of his new kitchen ““ at the newly opened Noble Bistro in downtown Oakville.

I arrive at Noble Bistro on a bright afternoon, and am greeted by a gentleman blocking the entrance as he changes the menus posted by the door. “Sorry Miss, just changing the menus again,” he says to me with a smile. I've met James Baker, the first of the trio of men who have combined their talents to open Noble Bistro.

Baker has built himself a successful publishing company based in Mississauga, and spent his career focused on publishing and marketing, with ample downtime spent indulging in great food and wine. Often that time indulging was with friend Augi DeOliveira, and eventually the two of them cooked up a plan to one day open their own restaurant. Each has his career, but the restaurant was their passion project, their hobby, and finally their new business.

DeOliveira has been involved in the food industry for his entire career, and was convinced their combined talents along with those of a great chef would be the perfect partnership for a successful restaurant.

They would need to find a great venue, and an amazing chef. For years the pair found locations, or chefs they were interested in working with; but never the right combination at the right time.

Enter hot, young chef JohnRoss Woodland, and the third partner was found. “When Augi met JohnRoss, he said to me, 'I've found our chef!',” says Baker. DeOliveira adds, “for years we had almost the right combination. First a venue we liked, but the right chef wasn't available; then a chef we were interested in working with, but not the right location. When I met JohnRoss, I knew we had the right person to finally open our restaurant.”

Chef Woodland grew up near Picton, Ontario, spending his spare time helping at his parent's business: grocery stores. In an effort to score an easy A in high school, he enrolled in home economics class, and soon found he had some talent in the kitchen.

Growing up in what has become a centre for farm-to-fork dining, Woodland studied and worked for four years with celebrated locavore chef Michael Potters at Harvest in Picton. He then became sous chef at Blumen Garden Bistro. Later, at the still tender age of 21, he opened and sold his own place: The Devonshire Inn in Wellington. You may now know this establishment as The Drake Devonshire.

Woodland found himself in the city, and in 2014 the winner of Chopped Canada on Food Network Canada, a coup for such a young chef. He was also named one of the Top 30 Chefs under 30 in Canada.

Now you can see Chef Woodland in the new kitchen at Noble Bistro, acting as chef and operational go-to-guy for the restaurant, which just opened in May.

“We really listened to JohnRoss in terms of what the restaurant should look and feel like,” says Baker. “We knew we wanted an elevated dining experience, but one that felt welcoming and comfortable; fine dining quality dishes and service, but in a place you feel like you want to spend some time with a good glass of wine.”

The menu is focused on what is local, and what is fresh and available on the day, or the week; so offerings are constantly evolving.

Starters include a Soy Maple Glazed Pork Belly, currently served with a seasonal vegetable cassoulet with bacon and horseradish consomme and Mill Creek Pea Risotto with shaved truffle and mascarpone. Nova Scotia Lobster Linguine has quickly revealed itself to be a crowd favourite, with many diners asking for the starter to be prepared as an entree.

On the list of mains, one pasta was a must for Baker and DeOliveira, so the Confit Chicken Pappardelle Pasta was created featuring house-made pasta, Highline Farms mushrooms, bacon and freshly-grated Parmesan. For beef lovers a Dufferin County beef tenderloin, served alongside a ragu of Boots Farms beets, carrots, August Harvest pearl onions and red wine jus.

“The menu will change, so what you like today may not be there next time, but there will be something you'll like just as much,” says Woodland, “You have to trust me, it will be delicious. It's a good thing James is in the publishing business, he can't believe how often we need new menus.”