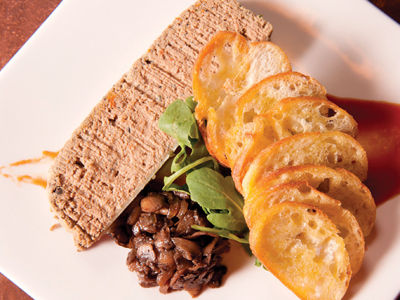 Adam Mackay is used to a little company in the kitchen. As executive chef of both Paradiso Oakville and Paradiso Burlington, each dish he creates is carefully examined by hungry, watchful eyes. In fact, in its position in the middle of the dining room, Mackay's kitchen is open for all patrons to examine. Every handmade dish becomes a scene and every meal a show.

With a southern Mediterranean menu Paradiso looks to impress guests with fresh house-made meals and, where possible, locally sourced ingredients, too. In fact, with regard to seasonality, as many local flavours are included as possible. For example, while Mackay creates the Greek salad with local tomatoes in the summer, the little local gems must be substituted in the fall, “I can't use local anymore to keep the quality at where I want,” says Mackay, an 11-year Paradiso veteran.

Guests looking to experience prime local ingredients should skip the regular menu altogether and head straight to the “˜Feature Program', a meal created exclusively by Mackay in order to showcase fresh, local ingredients and offer a taste of something new. The feature program, available everyday, offers guests familiar with the bi-annually adjusted menu an avenue to experience a new appetizer, two unique main courses of meat or fish, and a new dessert, every two weeks. Plus, just before the menu changes from summer (May-October) to winter (October-May), guests may even get a sneak-taste of future menu items. “As we come into September, I've already started working on my fall-winter menu and my feature program becomes an outlet to get some feedback on some items that might make an appearance,” says Mackay.

Regardless of the season, Paradiso aims to please with casual fine dining and a warm atmosphere. With splashes of orange, green and blue, the restaurant tries to keep a modern Mediterranean feel, even though it's still has contemporary touches like large booths and copper-topped tables, says Mackay. (Paradiso Burlington features copper-topped tables in three of the five dining rooms, a feature sprouted from the original location). Looking skyward discerning patrons will even notice handblown glass light fixtures, each completely individual and unique created by a relative of part-owner Kerry Campbell.

Campbell, along with co-owners Stephane Sauve and Paul Asaris, purchased the Oakville location in 2000. And, after building on its success, the trio decided to open another location in the heart of Burlington, on Pine Street, in 2003. Celebrating its 10-year anniversary, Paradiso Burlington hosted a VIP night in May to mark the occasion. Plus, with Paradiso Oakville also celebrating its 20th anniversary, a VIP and media night is already on track for October.

Whether celebrating an anniversary or simply out for a drink, Paradiso patrons can also look forward to an extensive wine list. The restaurant promises a wide variety of options with prices ranging from $40 to $200 a bottle. Best of all, for any wine enthusiasts, Paradiso offers a “Winemakers Dinner”, a five-course meal with each course specifically created around a different bottle of wine. The night grants patrons the chance to meet both Mackay and the winemaker responsible to talk wine, food, and the magic of a pairing. The winemakers dinner costs between $75 to $90 a ticket and is held approximately every three months, pausing in November for the winter months.

With such a devotion to food, wine, and the craft of creation, visiting Paradiso any time of year one thing's for certain, a great meal is not a destination, but a journey to savour.