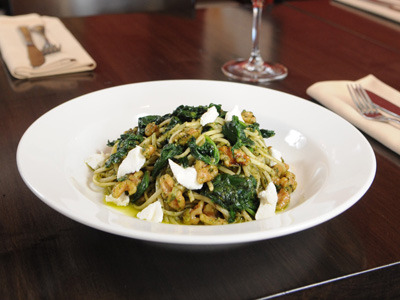 Pat Sinaguglia wasted no time in building his dream of becoming a restaurateur. Just as soon as he saw the “˜For Rent' sign plastered to the window of the building at 50 Lakeshore West in Oakville he immediately called the telephone number scrawled on it.

“Within 15 minutes of negotiations I had a deal,” says Sinaguglia. By May 2009 all of the building permits were in line and he his wife Laurie ““ as well as several talented friends and family in the trades ““ set to work on knocking down the existing ceiling and walls, stripping the interior down to the joists. A little more than three short months later, in August, the doors were opened and the masses have flocked in since, in a steady procession from addresses near and far.

Pasquale's Trattoria, which mean's “˜little restaurant' seats 50 and has a timelessly tasteful ambiance of earth tones set against classic dark wood chairs and tables, oversized porcelain floor slabs, frosted glass, pendant lighting and frescoed walls.  While opening a trattoria in Oakville lets the Sinaguglias work where they have lived for the past seven years, Pasquale's is the culmination of a dream for a fellow who was introduced to the restaurant business in Toronto at age 12. Sinaguglia worked as a busboy, dishwasher, on the line, waiter, or wherever else he was needed over the years accumulating valuable experience and a strong work ethic. Sinaguglia's trattoria follows in the footsteps of his father, Papa Calogero, who opened his first restaurant, Pinnochios, in 1966.

“I enjoy what I do. It's all I've ever wanted,” says Sinaguglia, who was brought up the old school way: do your best daily and work as if the place is your own. His status of ownership has changed but the determined and loyal attitude remains. He sticks to the basics in the belief that simple, natural ingredients taste best. Homemade lasagna, cannelloni, fettuccini, spaghetti sauces, pizza dough and even desserts are all recipes borrowed from his parents who had a penchant for making back-to-basics, simple food into something spectacular. The tradition continues in the basement kitchen of the restaurant where a pasta maker sets to work each morning and fresh tiramisu, beignet, cheesecake and sorbet are created too.

“As long as you are honest and treat people well with the best level of service and reasonable prices, diners will come,” says Sinaguglia. The formula is working. Patrons from Sinaguglia's time as a waiter at Pinnochios come to Pasquale's too, as does everyong from young families to elderly couples.

“Everybody is welcome and we treat each customer like family,” says the consummate host.

“It doesn't matter what you do, you can only be as good as the team by which you are surrounded,” says Sinaguglia. “They are all good people, from the prep crew to the service staff they are all like family,” he adds. And like a family, at the end of every shift they break bread together.

“I plan to be here for a long time,” promises Sinaguglia. “And by working together we will.”