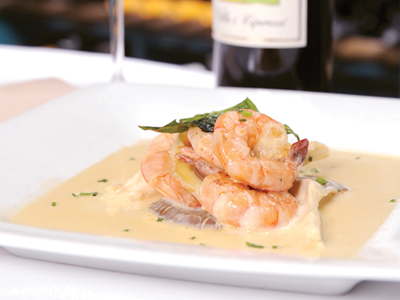 The staff that dines together stays together and vice-versa.

It's a good sign for patrons of Piatto that the food being served is the same delicious fare gobbled up by the restaurant's staff after the lunch and dinner rush. It's a daily tradition that will never change. They're “like family,” says co-owner Tom Skrela of the 13 kitchen and wait staff, many who have been with Piatto since day one.

Named for the plates that deliver delicious Italian and Spanish fare to the table, Piatto opened in February 1989. It was an ominous start. By May the economy began to slide into recession.

“The timing for opening a second restaurant wasn't great for us,” says Skrela, who co-owns Piatto with Sandro Julita. The pair previously ran a restaurant in another Mississauga landmark, Cherry Hill House. “It was a rough time in the beginning, but we turned it around,” adds Skrela.

In times of struggle, strong families pull  through because of dedication and hard work. The “regulars” are included in this definition of family. Some sidle up to the elegantly laid tables to enjoy Chef Fernando Garcia's creations once, twice, even three times a week.  And their offspring continue the tradition. Many regulars followed Julita and Skrela to Piatto, after they sold Cherry Hill House 15 years ago.

Hard work has been a way of life for these business partners.

Skrela moved to Canada from his native Montenegro in 1969. He was just 18. From the start, restaurant life would consume his workdays. He spent six months at a Montreal restaurant before moving to Toronto to work as a busboy at the King Edward Hotel.

“Sandro and I have learned the business from the bottom up,” says Skrela. Their respective resumes read like a high-end travelogue. The Hyatt, the Prince Hotel, Fenton's, Napoleon's and a gig at a hotel in Jamaica.

Skrela was a waiter and Julita a maitre d' at the Hyatt in Yorkville when they began talking about going into business together. More than 25 years later they remain good friends. “It's like a marriage, there's give and take and it works,” says Skrela.

The menu and casual, yet elegant ambiance, provide ample evidence of this congenial relationship. The food is light Italian fare, a bow to Julita's heritage, with Spanish influences that pay homage to Chef Garcia's roots in Madrid.

In March, July and October, Chef Garcia expresses his creativity through his now famous “Semana Gastronomica” (gourmet week) featuring classic and modern Spanish cooking paired with wines from his native land. In May, Julita's passion for mushrooms takes centre stage. The self-described “mushroom freak” heads out into the woods looking for morels and other wild mushrooms and hands them over to Garcia to work his culinary magic on the appetizer, entrée and even dessert menus. The annual event has created a huge following among Piatto's patrons.The prix fixe menu is also reasonably priced too, adds Skrela, at around $35 to $40 for three courses.

Piatto's success may be due to hard work and the longevity of its staff, but ask those who have dined there and it is the friendly, attentive (but not overly so) wait staff and fresh-made gourmet food in generous portions at reasonable prices that get the rave reviews.
RECIPE: Spanish Paella with Shrimp, Chicken and SausageRECIPE: Shrimp with Sambuca Sauce
– 1646 Dundas Street West, Mississauga; 905.896.9111