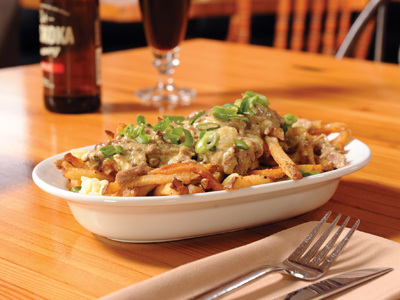 Everything at Oakville's Plank Restaurant is made in house. Everything includes the cumber vodka infusion for cocktails, pizza dough, poutine gravy, and all condiments including the “butt kicking ketchup,” so proclaims chef and co-owner Gordon Goss. Plank is part of the Cucci, Firehall and Catering by Heat group, and although Goss is one of several investors in Bronte's newest lunch, dinner, weekend breakfast, and late night social hub, he's the imaginative engine behind this “chef inspired resto bar” built, well, from the plank up.

“I like to say no trees were harmed in the making of Plank,” Goss quips, one of many clever sound bites sprinkled through our conversation. Every piece of wood in this chic rustic wood-panelled restaurant is reclaimed from somewhere ““ think urban loft meets log cabin ““ and even the eye-catching wine racks are handmade from former Weston Bread pans and stacked shelf-style on every wall.

The L-shaped bar is dominant in the interior design reminding patrons that sometimes house parties end up in the kitchen, but the best pub gatherings end up on bar stools. To encourage some late evening activity, all pizzas are $10 after 10 p.m. and there's a DJ planned after 10 p.m. on Fridays and Saturdays, and live music lined up for Thursday evenings at 8 p.m. To add to the irreverent fun, if you show up on the last week-end of every month between 10 a.m. and 2 p.m. for breakfast wearing your pajamas, your meal is half price. So far, according to Goss, about half of their primarily age 30-plus clientele joined this Weekender event in their flannels and button-up pjs. (Note that t-shirts and sweatpants don't count).

But ultimately Plank is for foodies looking for a high in quality, low on pretense experience who are curious to see what creative culinary minds can do with classic bar food, local produce, and a strict determination to make everything to exacting chef specifications. For example, the fish and chip option is neither smothered in chips, nor contains cod or haddock. “We add a cool blue potato salad which is vinegar based,” says Goss, “and use B.C. Arctic Char and garlic scape tartar sauce.” The chicken pot pie ““ a pub staple ““ is made with heritage-breed Chantecler chicken, sourced from a local supplier. This bird, according to Goss, is served to combat what he calls “Big Mac Syndrome.” It's not mass produced or grown to an excessive size, but grows for 90 days and maintains its natural small breast and fat legs and tastes, Goss says, “what meat should taste like.”

No menu, especially at pubs, is complete these days without poutine, but this is not your Quebecois uncle's variety. Despite the fact Goss plans to change the menu, not seasonally but monthly at Plank, poutine (along with sliders) will be a staple ““ or people will rage, says Goss. Reasonable decision considering this is the only place in town the Quebec classic is made with shoestring fries (cut in house of course from Russet potatoes), duck confit, foie gras sauce and fresh cheese curds that actually melt into a stringy mess. Celebrate the duck in a big way (or three ways, as Goss says) and add a fried duck egg to the top of the mound.

Plus, small plate sharing and multiple sampling is not only encouraged, but the only option considering the menu consists only of “bits and bites,” options, a “small plate” selection and a list of pizzas, four of which remain on the menu continuously including the most popular: Big Bird with smoked chicken and bacon, caramelized onions, goat cheese and pesto. The Wagon Wheel, however, is for the true gourmet “za” aficionado sprinkled with wild mushrooms, toasted pine nuts, truffle oil, Gouda and pesto.

Simplicity is the key to a great pizza, according to Naples-born chef and Plank pizza expert Bruno DiSarno. He mixes the dough, allows it to rise naturally for two days then hand stretches it in traditional Italian style before baking it for several minutes in Plank's high-heat pizza oven imported from Italy. What results is a Neopolitan thin, crispy yet moist, crust topped with carefully selected and blended toppings and just the right dose of inimitable Bruno charm and care. If you want to know anything about pizza ““ why Margherita pizza is red, white and green, or who first put egg on it ““ ask Bruno. If you want to try egg on pizza, order the Carbonara. Goss scrambles a duck egg and pours it over the smoked duck topping and parmesan cream base.

Wash it down with bourbon, because this is a bourbon bar. Why? “Why not,” says Goss. “Do you know any others?” As of now, he has yet to distil his own bourbon, but root beer syrup made with 27 different roots and botanicals, blended with club soda, bitters and Makers Mark creates Plank's signature cocktail, and the seeped spiced old fashioned infusion made in house creates “Christmas in a glass,” says Goss when mixed with the right about of bourbon and paired with the perfect Plank tapas-style creation.