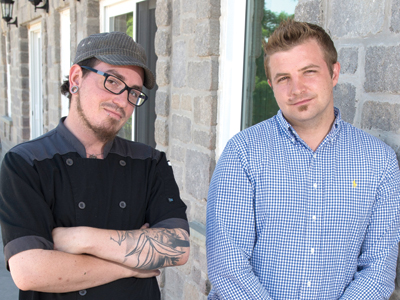 It's a hot summer day under a   blazing sun when we arrive at Risposta Bistro. It's another scorcher in a streak of high temperature days, but Chef Will Edsall doesn't mind one bit: it's doing wonders for his tomatoes.

As we stroll the grounds behind the restaurant, Chef Edsall shows me the variety of greens, carrots, beets, beans and squash they hope to harvest in a few weeks time. There is also a selection of herbs, and a large tomato patch, the plants already towering over my head.

“We are really trying to have everything as fresh and local as we possibly can, so we're excited about what will be coming out of our garden,” says Edsall. “These tomatoes are going to be so beautiful on the menu. Some of the vegetables will find their way into pickles and preserves, we'll find interesting ways to incorporate our harvest on the menu,” he adds.

Edsall is heading up the kitchen at the newly opened (June 2015) Risposta Bistro in Campbellville. And, quite a kitchen it is. There is a wood-fired pizza oven, a pastry kitchen, a butchery and a catering kitchen to serve Risposta's event and meeting space, housed on the upper level of the building. From the back of house staff are turning out freshly baked breads, pizza dough, hand made pasta and desserts each day.

Edsall joined the team at Risposta Bistro after a stint at a popular downtown Burlington eatery, joining his longtime friend Patrick Beatty, charged with managing the front of house and duties as sommelier. Beatty spent the past few years at Glen Abbey Golf Course in Oakville.

Edsall and Beatty are a dynamic duo. Edsall talks with passion about what dishes he can't wait to introduce to the menu as the harvest season arrives, Beatty eager to share his modern take on a cocktail menu, not to mention his wine list.

“We've only been open a few months, but we already have our regulars from the area, but also people who visit us from as far away as Toronto,” says Beatty.

The restaurant is tucked onto a quiet street in Campbellville, a pretty, winding drive north of Burlington. The dining room is comfortable and welcoming with high ceilings and warm tones, a a place ideal to linger with a glass of wine and plate of pasta. Outside a large patio for the summer months; upstairs, with its own entrance, a large event and meeting space.

The menu is filled with Italian classics, prepared with Edsall's modern sensibility. Carpaccio is made from local veal tenderloin, served with local greens and grilled lemons; Antipasto Risposta a gorgeous board created from a selection of the restaurant's own cured meats, cheeses, olives and grilled vegetables. Entrees range from Vitello Limone and Bistecca Alla Griglia (10oz New York Striploin in red wine demi glace) to traditional and homemade Spaghetti Bolognese and Penne Alla Vodka to decadent Risotto Pescatore, served with a half Atlantic lobster, scallop, schrimps, clams and mussels. Don't forget the pizza menu, the dough is made in-house, stretched thin, topped with house cured meats and baked in a wood-fired oven.

“We built the menu on presentation and creativity, but most of all flavours,” Beatty says. “We live and breathe food, and while we want to bring diners the dishes they would expect on an Italian menu, we want to do it in our own way.”
The pair has also put their creativity to work on the restaurant's impressive cocktail menu. Housemade bitters and syrups are dashed into Beatty's concoctions, heaping with as much style as they are taste. Among the signature cocktails who could resist the Smoked New York? Sortilege Maple Rye combined with sweet vermouth and vanilla bitters served with a waft of hickory smoke and a cherry.

Risposta Bistro is open for lunch and dinner Tuesday to Sunday. Brunch is served on Sundays starting at 11am.