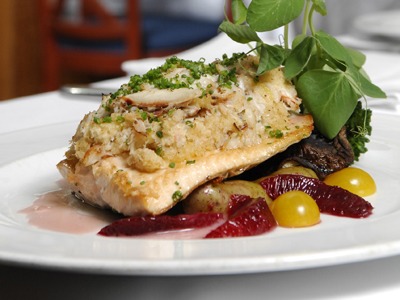 Tony Pereira's phone rings more than a dozen times during the 30-minute interview for this story. A reservation is made for most and one was a cancellation due to illness. He wishes the ill patron a speedy recovery before hanging up.

Such considerate sentiment comes naturally to the restaurant owner. He's been known to check in with regular patrons at home when they don't show up on their regular lunch or dinner visits. “I worry about them, they're like family after all their years of dining here,” says Pereira.

He is the same way with his staff of 33. In an industry that typically faces high turnover, the story at Rogues defies the odds. Many have worked at the restaurant for more than 20 years. This includes head chef Bevan Terry who worked with Pereira at Chez Marie in Brampton and moved with him to open Rogues in 1985.

In the case of Chez Marie, Pereira again defied the odds. He opened the fine dining French restaurant in 1982, which was the midst of a recession, and in a blue-collar town no less. He worked his magic winning over the community to earn the title best fine dining establishment among residents three years in a row.

He has repeated the same success at Rogues by following his well-learned “˜don't-cut-corners' mantra. “Do things the right way the first time so you don't have to do them twice.”

This disciplined attitude applies as much to his dining and wine menus as it does to the community in which his livelihood, as well as his staff's, depends.

The menu is seasonal, always fresh and the specials change twice a day at Rogues. Deep fryers and walk-in freezers are verboten for the man who learned to cook at his grandmother's knee while growing up in his native Portugal. It's this European influence that inspired the Fish Festival in January. Like the Wild Game Festival in November, the Fish Festival of the New Year has been a much anticipated event for the past quarter century. “It's one our busiest months,” says Pereira who again defies convention by drawing in crowds at a time when the post-holiday bills often prompt consumers to tighten their wallets.

“With a varied menu customers don't get bored ““ especially the regulars ““ and neither do the kitchen staff,” says Pereira. Everything from desserts to smoked meats and breads are all made in house. Even the linens are washed on site in commercial machines to ensure Pereira's high standard is met.

An admitted “˜wino', Pereira is just as picky about the extensive wine list, which is hand selected to suit any palate and budget. It has 800 to 900 choices representing vintages from France, Italy, Australia, New Zealand, Chile and every other corner of the world and ranges from $28 per bottle to a pricey $1,500.

In the same way Pereira immerses himself in every facet of his business that has become a city landmark, he considers it his responsibility to help children in the community. “If we can't look after the little ones, what will the future be like,” asks the grandfather of three.

His latest achievement is the Sam McCallion small business community involvement award, earned for his involvement in charity work such as the 20th annual holiday brunch in support of Peel Children's Centre. The $125 per plate event is sold out months in advance and has contributed almost $1 million over the years to the children's mental health centre. St. John's Ambulance, the United Way, Drug Free Mississauga, and the Teresa Group, which helps children affected by HIV and AIDS and their families are also on Pereira's philanthropic radar.

It is little wonder that such loyalty to the community has been rewarded with longevity in the business.