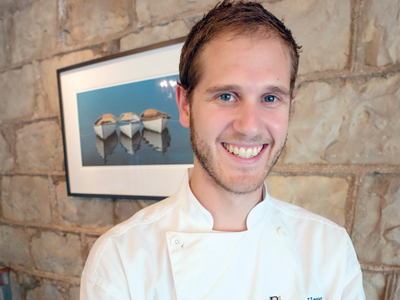 Located in the heart of Ancaster on Wilson Street, Rousseau House Restaurant has an equal dedication to both preservation and renewal. Aiming to preserve as much of its 19th century structure as possible, the restaurant also strives to offer patrons a constantly evolving menu of global influences and a mixture of dining experiences to suit nearly any mood or occasion.

This dedication to preservation, of course, is no accident. As owner Andrew Kershaw explains, painstaking measures were taken to bring the house, originally conceived in 1837 as a manor for George Brock Rousseau, back to its original lustre. After Andrew's father, Ken Kershaw, purchased the property in its original state in 1997, the house was carefully remodeled and refinished. “It was all original,” says Kershaw. “It was all the original plaster, the floors were unlevel and beaten up, so we took it right back to the stone wall itself.” Part of the refurbishment included the restoration of the windows, relocating the upper dining room floorboards down into the main floor, even rotating the staircase 90 degrees to accommodate for the lack of load-bearing walls in the original structure. The restoration took two years, with Andrew performing much of the work, and Rousseau House finally opened for business in October 1999. But don't be mistaken. Beyond the nostalgia and “wow” factor built into the foundation of Rousseau House, the restaurant aims to keep up-to-date with an ever-evolving menu of seasonal lunch, dinner and dessert.

With Chef James Stephenson taking the helm back in February, Rousseau House now takes the term seasonal dining to new heights. Previously changing its menu once or twice a year, Chef Stephenson has chosen to churn out new menus every season. With free reign to create sumptuous seasonal specialties, Chef Stephenson looks to cull global influences into every tri-monthly menu. The current spring menu brings asparagus, peas, and fresh spring greens while winter patrons can look forward to more local fare, like braised beets. Visitors can also expect a choice of sub-menus as well with tapas, lunch entrées, and a dinner menu all available daily. Rigidly dedicated to culinary renewal and evolution, only one menu item has repeatedly graced the pages of the Rousseau House menu: the house-cut frites. With Pecorino Romano cheese, truffle oil and garlic, the dish has become a house favourite. “It's sort of a staple diet here for customers,” says Kershaw.

In keeping with the theme of diversity and renewal, Rousseau House offers patrons a variety of rooms and experiences to explore. Those looking for a more convivial occasion will find a bar, a lounge area with a fireplace and booths, and a windowed solarium with stone walls on the lower level. Patrons looking for a more formal, intimate experience can head upstairs to the white linens of the large Panabaker dining room or take a seat in the adjoining Honeysuckle room for a more private experience, with up to 20 guests accommodated.

Just like the menu, Kershaw aims to frequently update and invigorate the interior of Rousseau House. “We're always evolving ambience,” he says. “Things become very dated. Everyone right now is into whites and bold patterns on the wallpaper.” Having redone the wallpaper, added sail shades to the patio, and reupholstered the banquettes all within the past six years, it's clear that Rousseau House is not only a physical preservation of the past, but a dedication to continuing evolution as well.