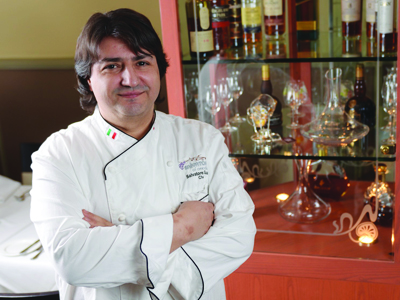 But Salvatore Guarna can. “It was intimidating cooking for them but the creative challenge made each assignment worthwhile,” says Guarna, owner and head chef of his namesake restaurant in downtown Oakville.

Salvatore and his wife Anna moved their restaurant from Mississauga, where it was a well-loved destination for 20 years, to its current 218 Lakeshore Avenue West address in July 2012.

“It's been a good move for us and means a shorter drive for our regular patrons who were making the trek from Oakville to our Mississauga location all those years,” says Salvatore. “Now we're meeting the wives of the company owners who would frequent our restaurant while we were in Mississauga.”

Anna hails from the Italian region of Abruzzo and Salvatore from Calabria.

He earned his chef status at Italy's esteemed Istituto Alberghiero School and gained his practical experience at the many restaurants that saturate the tourist area sandwiched between the Ionian and Tyrrhenian seas.

“I was drawn to the restaurant world in my teens because in Calabria, the hospitality industry was the main source of employment.”

Salvatore arrived in Canada in 1987 via Switzerland. He immediately threw himself in the restaurant industry, working at Villa Borghese in Toronto and at the Toronto Convention Centre.

Ironically, he met Anna in his newly adopted country and the pair married and have three children; two daughters and a son who each do their part for the family business.

The upscale yet cozy atmosphere of the restaurant's interior, and the private banquet hall in the basement, is due to Anna's influence. White starched tablecloths, gleaming glassware, quirky pots of olive oil and two-tone white leather and deep wood chairs contribute to the beautiful setting.

Impeccably groomed wait staff, attentive as they are knowledgeable about food and wine, complete the triumvirate of fine dining.

The menu is homage to Salvatore and Anna's Italian heritage. Reading it alone is an opportunity to learn a little of the language. Salvatore may even offer some pronunciation tips to diners who ask.

Some of the most popular dishes are sea bass that cooks from the heat of the sea salt in which it's encrusted. The salty shell on the whole fish is cracked at tableside and served, a show that always amazes diners, says Salvatore.

The wine list is an extensive one personally built by Salvatore from day one, back when he opened his namesake restaurant in 1984. While it's hard to let go of some of his favourite vintages, it's a thrill to finally pop the cork on them too, he adds.

“We've built long-term relationships with so many of our patrons,” says Anna. “And shared in their lives from hosting engagement parties to christenings to weddings and birthdays. We hope to do the same with the Oakville community.”