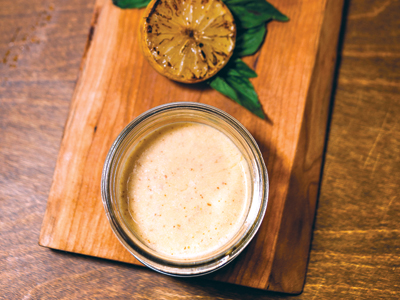 Both Kimberly and Bart Nadherny always knew they would open a restaurant, specifically a pizzeria, and when they met five years ago, they knew they would do it together. They just didn't know it was going to be in Southern Ontario near Bart's hometown.

Theirs is a classic romance, minus the football team and cheerleading squad: she was a student in Washington D.C. studying liberal arts and working as an agent for artists and illustrators, and he was a chef at an ultra-fine dining restaurant called 1789 and hobnobbing with Al Gore and Bill Clinton. Kimberly and Bart eloped, saved all their money (“literally, all our money,” Kimberly emphasises) and on May 8, 2014, opened the 40-seat Son of a Peach contemporary/retro gourmet pizzeria in Burlington. “Maybe we're crazy,” Kimberly says, clearly the radiant energy behind the youthful duo, “but we didn't do any research. We just followed our gut and our dream, jumped in and just did it.”

“We wanted to open a restaurant and people were directing us to Hamilton,” she explains in rapid fire progression. “We were exploring the area, turned off the QEW on impulse and ended up in Burlington. Then we saw this space in an almost empty Village Square downtown. I actually fell in love with the windows.”

Ok, so maybe their story isn't conventional. But nothing about these two owners of the recently expanded Son of a Peach pizzeria is.

“We do everything the old fashioned way,” she says. “A lot of thought and energy goes into everything we make and use.” The pair spends limitless hours sourcing the best ingredients from local suppliers: aged Italian Parmigiano-Reggiano with 30 per cent milk fat. “Creamier and richer than others,” Bart says. Naturally raised, no hormone, meat for sausages made by hand; local honey from Charlie Bee Honey; and flour from Arva Flour Mill near London, Ontario. “The oldest water-run flour mill in North America,” Bart says. The flour is for the restaurant's three-day fermented dough that becomes all bread products and pizza crust sold here.

“We have a new special every day,” says Bart, “and the overall menu (with 11 items) will evolve through the seasons as we feel necessary.”

Son of a Peach appears to be a small trendy eatery with a stone pizza oven churning out gourmet pie offerings: The Meatza, four types of meat so heavy, Kimberly says, it's hard to lift out of the oven; the Fig and Prosciutto with arugula and black California figs; and the Wild Mushroom with garlic and five kinds of mushrooms. But it's not just a restaurant; it's a production facility.

Look behind the curtain downstairs and there's a wizardry of dough making, sweets baking, meat curing, tomato sauce stewing, hot sauce and mustard mixing and cauliflower and onion pickling going on. Many of these items will be available at the takeout counter along with grab and go desserts such as brownies and cookies.

Kimberly genuinely finds the amazing in everything: amazing feather lights to complement her interior design vision, amazing wooden boards for charcuterie, amazing rolling pins to sell as Son of a Peach merchandise at their take away counter. While Bart, who's been cooking since he was 14-years-old and has studied the slow food movement in Italy, remains adamantly committed to detail and quality food inspired by his tastes, and his passion for all things pizza.

“I love the simplicity and quality of ingredients that allows for an awesome product,” he says. “Even when we go on vacation, the first thing we eat is pizza. It's a ritual everywhere we go.”

Bart is equally excited about the burgeoning craft brewery movement in Ontario that's focused on the taste of the brew master rather than trends, he says. On tap at Son of a Peach is always a local beer sourced by the couple, along with a cider from Ironwood, a sparkling wine from Contraband, and one white and one red wine selection.

Yes, wine on tap. In the Niagara Region, there are more and more wineries participating in the wine on tap program, Bart says. “They used to put their cheapest wine in a keg, but that too is changing. For instance, at the winery we've selected (after extensive research) we hand select and taste a barrel that will go into the keg we buy for our restaurant. That way we get better quality wine at a better price.”

“We are very progressive in that we want to eliminate a lot of environmental waste such as bottles and corks,” Kimberly adds, “and suppliers appreciate the integrity of the process we go through to select all our products.”

Progressive or fearless ““ it's a fine line. Son of a Peach has gone from a small, funky 20-seat pizza shop to double the seating, space for private parties of 40, additional bar, and merchandise take-out counter, all within six months of opening.

“When we first started this,” Bart says, “I pictured myself making pizza, Kimberly running the front of house, and maybe three other staff members ““ the five of us having a good time in a Mom and Pop shop. That vision fizzled quickly. We are now up to 22 staff members and doubled our space to avoid turning away customers.”

Next up is coffee, but first Bart and Kimberly have to source the perfectly roasted bean. Stay tuned. In the meantime, enjoy the classics: amazing pizza and beer (and wine on tap).