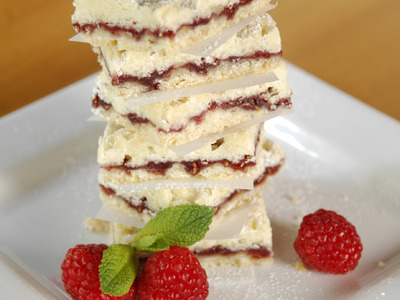 While you won't find any cowboy paraphernalia in Oakville's Sweetsmoke Barbecue and Grill  ““ as co-owner and chef Andrew Taylor puts it, “the décor is modern, we don't get into the corny stuff,” ““ walk into the restaurant and the smell of barbecue greets you instantly. One look at the menu and it's clear where the restaurant gets its inspiration.

Slow-smoked pulled pork with iron kettle cowboy beans, hickory smoked side ribs with Texas barbecue sauce, and the classic southwestern club sandwich are just some of the menu favourites Chicago-born Taylor and his partner, wife and pastry chef Miriam Folkins put together when they opened the restaurant in April, 2007.

The southern barbecue classics are inspired by time Taylor spent in Dallas, Texas, as sous chef of one of the top restaurants in America, The Mansion on Turtle Creek.

“We opened the restaurant because we just felt it was time to do something for ourselves,” says Taylor, an industry veteran who got into the business in the 1980s. “We looked at a lot of options, talked about some fine dining options, but in the end we decided a barbecue-style restaurant would be a little different.”

Folkins and Taylor, who met while working at Toronto's Jump Restaurant, make up quite a team. Between the two of them, they've cooked at four- and five-star restaurants in Chicago, Texas, Toronto and Ottawa. Nova Scotia-born Folkins, a graduate of the Cordon Bleu culinary school, was the pastry chef at Toronto's chic Canoe restaurant before she and Taylor decided to make the jump in Oakville.

Their 38-seat restaurant is full of activity. “Everything is made in-house, other than the breads for the sandwiches,” Taylor explains. “We smoke all the meats here ““ we smoke the ribs, we smoke the pork, we smoke the turkey, all in-house.”

It's classic barbecue, no question. “We've got a burger on the menu and I've been told no fewer than 25 times in the last few years it's the best burger people have had in their entire lives,” he says.

For an idea of just how busy it can be, Taylor is putting together chicken fajitas during this interview, a Saturday when he has only one other chef with him in the kitchen. The restaurant has eight staff in total, but during the week it's Taylor and Folkins in the kitchen; he's making the entrees and appetizers, she's taking care of the desserts.

And the desserts are a highlight, if you ask customers. Folkins bakes cheesecakes, caramel tarts, lemon meringue tarts and other mouth-watering goodies in-house on a daily basis. Often customers pop in for a take-out dessert, or sit down for a coffee and some sweets. One the most eye-catching items on the menu: the cake and shake.

“It's a big hit,” Taylor explains. “It's dark chocolate blackout cake with a chocolate pudding filling paired with a miniature vanilla bean milkshake.” The item is Folkins' design.

Sweetsmoke made waves in Oakville instantly when it first opened its doors three years ago, winning The Oakville Beaver's Readers' Choice Award for best sandwich in town ““ for its ever-popular southwestern club ““ and second place for best new business.

The menu is both family-friendly and price-friendly, with the most expensive entree being the ribs at $25. Sandwiches are as little as $8 to $9, there's a kid's menu and all items are available for take-out.

Taylor's recommendation for first-time visitors: “I would start with the tortilla soup, then have a mixed barbecue sampler, which is a mixture of everything we barbecue ““ pork, turkey and ribs ““ and I would finish with the cake and shake, and some of Myriam's wonderful cookies.”

Now that's a mouth-watering taste of the American Southwest.