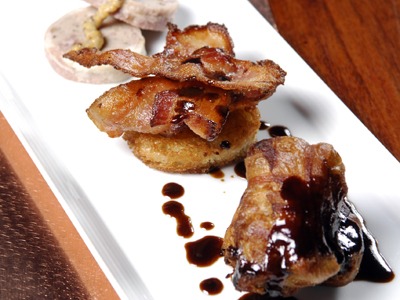 For years when Chef Matt Kershaw went out to dinner, he had one rule: no one can order the same thing. The reasoning is simple he says, “This way, we all get to taste each others dishes and enjoy a variety of foods.” And so it was during such an occasion of good food, good wine and socializing two years ago when the idea struck him for The Alex: smaller-sized portions to encourage trial of a wider selection of items and sharing.

As it turns out, he independently found himself on the vanguard of a new culinary wave that was starting to sweep across Canada: small plate dining. Not unlike the concepts of tapas, dim sum or Greek mezes, small plate dining offers smaller-sized portions but with large-size taste. It makes for a social dining experience where it's fun to share and try different things.

“Every restaurant has a soul, and for me, this was to be the soul of The Alex,” explains Kershaw, who proudly opened The Alex in November. It's the first of its kind in Burlington and has definitely struck a chord with customers who keep the chic, 30-seat restaurant bustling.

“We're fine dining without the fuss,” says Kershaw who, with his sous-chef, creates and prepares all the dishes himself. “We're casual. You won't find tablecloths here or stemmed wine glasses. But we are about exceptional food. Interesting, creative dishes served in small portions so you can enjoy more than one thing at a time. There are no airs, but we know our stuff and it's because of that that people keep coming back.”

To say Kershaw “˜knows his stuff' is an understatement. Trained predominantly in Europe, including experience with Michelin-starred restaurants, Kershaw also apprenticed at the Royal York in Toronto. He was on the Junior Culinary Olympic Team travelling across Europe and was Team Captain the year the team won the world championships in Luxembourg. For the last eight years, prior to opening The Alex, he was chef at the Hamilton Golf and Country Club.

“A lot of people tried to steer me away from opening my own restaurant,” chuckles Kershaw. “They said it was too much work. But I'm loving it. This is what I love to do. I genuinely love food and drink.”

The restaurant and hospitality business also seems to be in his blood, as it is his family who are the owners of the stately Rousseau House in Ancaster. Kershaw explains that food, drink and socializing are big themes in his family, so steering him away from having his own restaurant would seem a very hard thing to do. One of his favourite things, he says is to sit back with a good glass of wine and just “create” ““ thinking of interesting, big-taste sensations that he can put together and add to his menu, a creation that is constantly changing.

One of the more decadent items on the menu is his Trio of Bacon, featuring bacon-wrapped bacon no less. Quirky? Yes. Delicious? Absolutely. When asked why he created such a decadent parcel, Kershaw laughs and says it's because he's always been a massive fan of the pig, claiming it's good for the soul. “It's salty, it's smoky. You know, everything's a little bit better with bacon.”

But not all the items being offered are that decadent. Perfectly poached or grilled fish, expertly cured charcuterie and zesty salads are also show stoppers.

An Ancaster native, Kershaw, 35, finds Burlington to be the perfect market for his concept. “We're seeing a lot of repeat customers,” he confirms. “Our return rate is more than 90 per cent. The number one comment from guests is that we're fun ““ the food is fun and we're fun. And that's just great with me because I'm having fun.”

“In the end, I want people to have a good time. I want them to be just a little bit annoyed that they can't have more because they're too full, but hopefully that just means they'll come back,” he says with a smile.